Don't know what it is. Don't know where it comes from. Just know that I love it so, and that it wakes me in a state of inexplicable anticipation every single day. I think about, and make an attempt to exist in a world where fundamental input collides with statistical output that then results in pattern creation. This creation tells us more about the past then it does about the future. But surely offers enough valuable hints. Are you fired up yet? I truly hope so. You are on the right side of the dirt. Again. So, let's get after it.

The very thought of pricing, or actual value inspires the curiosity of the mind, while challenging the soul. Think I exaggerate? Perhaps you misunderstand. Perception of this necessary interaction is what drives human kind. It's about right or wrong. It is about reaction, while not diminishing the need to focus on preparation in the least. Oh. Still the heart of the brave. Those who seek to question. Those who seek fact.

Our pal, Doug Kass asks in his Diary "Is Price Truth?" To think deeply, and then opine on such is a matter of privilege. For price is indeed nothing but truth, but truth only for a micro-second, and understood as the result of inputs that themselves are known to bear both intentional and accidental skew. Policy, transparency, technology, and intent all impact greatly what results in the collision of demand and supply at a single point, a single place in time. Those impacts themselves even before visible in anyway, fuse the aggression of the id, with the pragmatism of the ego hopefully, but not necessarily then balanced by conscience. Who am I to ponder the honesty of price discovery in the darkness of the zero hours? Just a man. All we need to know is that darkness turns to light. Always. 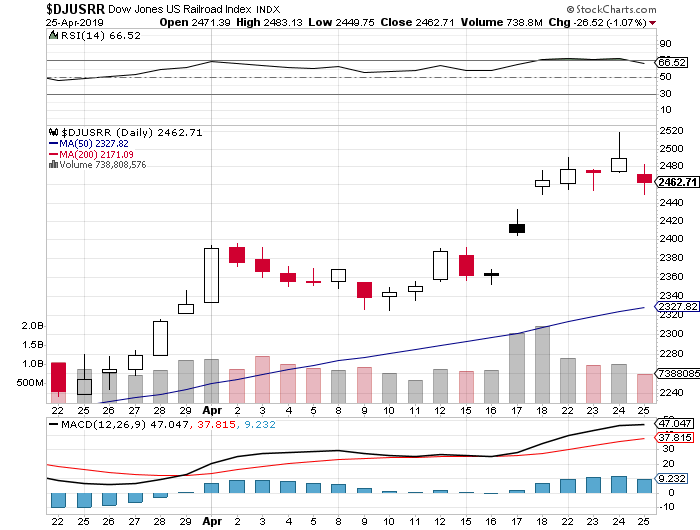 Even after a down day, the Dow Jones US Railroad Index has run 10% in a month versus broader equity performance of roughly 4.5%, led by the financials of all sectors at more than 8%. My dad helped me open my first retail trading account when I was in the eighth grade. Dad has offered me plenty of advice over the years, every bit of it welcome. One of the first things he told me, as I attempted to invest my paper route money, was to watch the rails. I always have. When your dad is the smartest guy you have ever known, you listen.

As the industrials (and thus transports) have come under sudden pressure thanks to under-performance by 3M (MMM) and United Parcel Service (UPS) , and the necessity that this creates for some traders to take profits where they have them, perhaps for those who missed the buy signals emitted by the rails weeks ago, they may just get another swing at that pitch should this weakness last a bit.

It is my opinion that at least technically, the rails still have plenty of room to run. Kansas City Southern (KSU) , and Norfolk Southern (NSC) stand closer to where I would take profits myself (I am long KSU), while I see reason to aim higher for CSX (CSX) , and Union Pacific (UNP) . (I am long CSX). If I can get a few more dollars in that trade, perhaps I work on a swap out of KSU and into UNP. I haven't done the math yet, the ratios for price and shares will be different when I do pull that trigger, but it's on my radar. As darkness of morning unfolds, the squirrel on that treadmill in the back of my head sees maybe another 5 points to the upside for KSU, but possibly another 20 to 25 points in UNP. The first look at first quarter GDP will guide us on this journey.

If the economy is as healthy in the short to medium term as I suspect, I won't tell you what to do, but I will need to maintain intelligent exposure to the rails myself. that much I know. Let us discuss...

Before we get too excited, we'll keep in mind that the initial glance at quarter over quarter economic growth that is then seasonally adjusted while also annualized runs on enough roughly estimated data to occasionally be somewhat inaccurate. We all know that fourth quarter GDP on it's final revision, hit the tape at growth of 2.2%, I cautiously look for above 2% growth this morning, but semi-secretly suspect that the number may come in a little hotter than that. The Atlanta Fed's model is currently at 2.7%, while private sector economists have been tripping over each other in recent days, trying to get their projections into the mid-2%'s prior to the news.

The incredible thing here would be that if the pace of U.S. economic growth actually picked up this quarter over last, the performance would be in spite of many factors that should have slowed growth. I'm not even talking weather. Europe is in garbage truck mode. Japan unable to do anything unless supported by the BOJ. Our own government shutdown. The temporary loss of anything resembling the ability to reason at the FOMC in late 2018 that forced an inversion of the yield curve, as well as the ongoing trade wars. All of these factors should have slowed activity. Remember, almost nothing matters more than the velocity of money. The U.S. had to go it alone in the first quarter, and even with problems that were of self-creation, may have pulled off the impressive.

We know that at least in March, business investment kicked back into high gear. Did the trade war actually provoke inventory building? Very likely. We know that trade deficits have decreased, as exports have grown more robust. This is positive. Fiscally, we remain postured quite irresponsibly. That, however for now... will be a positive. A problem for a different day, but a problem nonetheless.

Last month, ride hailing service provider Lyft (LYFT) , went public, the IPO priced at $72. The last sale for that cute little guy stands around $56. The firm's chief rival, the larger Uber is expected to file on Friday (today), and hit the road. Suddenly the price range that those in the know seem to be looking for has been taken down a peg or two.

The expectation is for that range to span from $44 to $50. Actually going public somewhere in there would raise $8 billion to $10 billion, which in turn would value the entire firm at $80 billion to $90 billion. That valuation had recently been seen in between $90 billion and $100 billion, and I am reasonably sure that way back when we even started thinking about an Uber IPO that there was at least talk of a $120 billion valuation.

You know what they say. If you liked it there, you'l love it here. More than likely, nobody with any capital liked it there, especially after what happened to LYFT investors... who are very likely the same folks. My guess? We'll see. The best thing to happen for the firm may, in the long run, actually be tempered enthusiasm. The retail investor likes you a whole lot more when you can hold your initial pricing for more than a single day.

(Microsoft and Amazon are holdings in Jim Cramer's Action Alerts PLUS member club. Want to be alerted before Jim Cramer buys or sells MSFT or AMZN? Learn more now.)

Get an email alert each time I write an article for Real Money. Click the "+Follow" next to my byline to this article.
TAGS: IPOs | Earnings | Investing | Markets | Stocks | Trading | Transportation