Trading the energy sector is certainly not easy. From worst to first in half a year. All while the largest firms in the wealth management business talk up ESG investing while talking down anything to do with fossil fuels. Still, what does an economy rebounding from a global pandemic crave more than energy, and what kind of energy at this point in history is less scarce and less expensive than anything more green, or more renewable? That's right, fossil fuels, from oil and gas right on to the dirtiest and perhaps cheapest fuel of them all... coal. What are economically damaged countries, especially those who were considered emerging, frontier or simply undeveloped even prior to the pandemic supposed to do? You know they will do what they see best in the short term. They have no choice.

For the rest of us, the choice is difficult, but remains a choice. Emit more carbon, rap more heat. Trap more heat, warp weather patterns. Warp enough weather patterns, accelerate climate change. Seems simple enough to follow. Yes, I know that Vikings grew corn on Greenland a thousand years ago, and now Greenland is too cold to grow corn. It's broader than what used to be called "global warming", and humans may or may not have been the main proponent of climate change, but there can be no doubt that humans have accelerated climate change and can act to slow such change.

Half a Year in The Books

Year to date, among the 11 S&P sectors, using SPDR ETFS as proxies, the Energy (XLE) sector has easily lead the equity market recovery, up 47.12%, as WTI Crude itself has recovered more than 54% of its value just since New Year's Eve 2020. Measure that performance against almost anything else in the equity space, and Energy wins. The second best performing sector, the Financials (XLF) are up 26.36% ytd, while the worst performing sector, the Utilities (XLU) are still up 3.6% for the year.

Among the major indices, the S&P 500, which I guess is the benchmark here, is up 15.87% year to date, while the Dow Industrials, Nasdaq Composite, Nasdaq 100, S&P Mid-Cap 400, and Russell 2000 are all up as little as 13.6% or as much as 17.47%. Energy wins, yet so many of us, myself included, had been at least earlier in the year, a bit shy to get overexposed or even just exposed to the group, as if it were tobacco or something. The planet will recover with or without tobacco. The planet can not recover economically without ample supplies of energy ready for use.

I had been long BP PLC (BP) the earliest. The stock has done well. I liked BP as a firm that had made a lot of noise about going as green as possible while still keeping both feet planted in exploration, production and refining. I also traded back and forth between Chevron (CVX) and Exxon Mobil (XOM) before ultimately choosing to go with XOM. Wise decision (really lucky) as XOM has outperformed the sector, up 58.12% for the year. (BP is up 34.85% in 2021.) Why Exxon turned out so well has almost nothing to do with their exploration, transportation, or production businesses, but more to do with activist investor Engine No. 1 winning seats on the board as a means of steering the firm in a new, greener direction, thus making the shares more palatable to portfolio managers.

With the premature death of the Permian reported ahead of the pandemic, and then the pandemic itself, opportunity was created in the exploration and production space, the North American exploration and production space to be more specific. Let's be clear, if I believed that OPEC and friends were really going to stick to already agreed upon production levels and nobody intended to cheat on anybody else with oil having traded at six year highs early on Monday morning, investing in North American producers would be a slam dunk, given that U.S. producers have truly shown some discipline as prices have risen.

That said, if the UAE cheats, and then Iran cheats, then Saudi Arabia and Russia will compete. The cartel plus alliance will fall into disarray until it decides that enough harm has been done and calls for a new emergency meeting. So, there's nothing easy here. I think I will stick with large-caps as there are so many small-caps across the space, some are quite volatile and may perform, but could also be on very shaky ground when markets get rough again.

That's why we look at three large-cap producers that have been outperforming, such as Continental Resources (CLR) , up 129% this year, Diamondback Energy (FANG) , +96.5% ytd, and Devon Energy (DVN) , up 83.3% for the year. I don't think I will pick three, I will pick one of three to take a small long position as oil markets and the energy sector turn negative for the day.

In terms of PE ratios, DVN, and FANG seem cheaper than CLR. CLR also pays the smallest dividend of the three by far. CLR also has by the far the highest level of short interest in terms of percentage of float. We might trade in anticipation of a short squeeze, but we don't invest for those reasons. Hence, I have eliminated CLR. Both DVN and FANG are currently running with negative profit margins. FANG's is much worse. Both firms have more than $7 billion in total debt. That said, DVN has more than $1.6 billion in cash, while FANG has little more than $100 million. In terms of current ratio, DVN runs above 1.0, which is seen by many as the divide between healthy and not healthy. FANG's current ratio is below 0.5.

The choice for me is clear. Devon Energy is the one local (as in North American) producer that I think I am willing to speculate on. 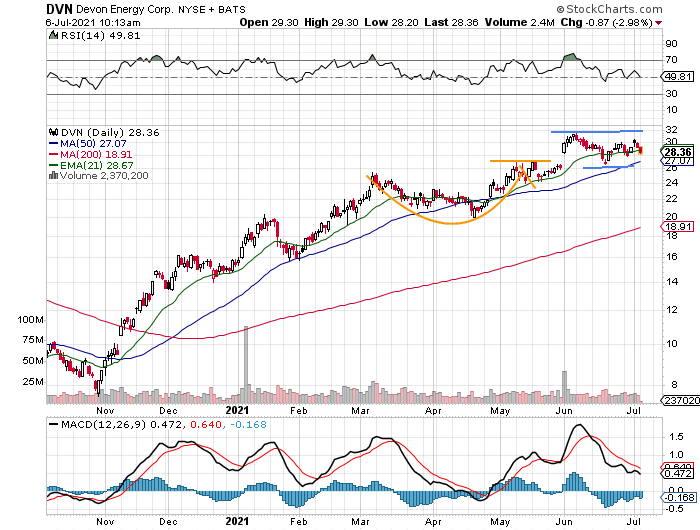 The shares have started to consolidate after breaking out of a cup with handle pattern on large volume back in late May. The gap created that day has filled. Relative Strength, after having signaled an overbought condition, is now neutral. The daily MACD is not in the greatest shape, but certainly that can change in a flash.

The shares have been straddling the 21 day EMA, but do appear headed for the 50 day SMA at the $27 level for a test at some point in the short to medium term future. Earnings, by the way, are due August 3rd. Expectations are currently for EPS of $0.46 on revenue of $2 billion. Both numbers would show growth over not Q2 2020, which is a given, but over Q2 2019.

Get an email alert each time I write an article for Real Money. Click the "+Follow" next to my byline to this article.
TAGS: Investing | Markets | Oil | Stocks | Technical Analysis | Trading | Energy |