Some of you remember the 1995 movie, Some of you the Stephen King novella, published five years earlier. The Langoliers showed up on Tuesday afternoon. In anger. The Langoliers were a an aggressive pack of insatiable fur-balls with nothing but grinding teeth that devour what's left of time and space as the present ages into the past. In other words, the past has to be removed in order top make room for the future in a constantly moving conveyor belt of reality. On Tuesday morning, equity markets had opened even higher after what had been a "risk on" Monday, and then traded sideways for most of the day.

It was then that the Langoliers, disguised as multiple waves of sell programs ravaged what was left of that rally denying the S&P 500 the chance at making a run at the highs posted in July and September. Incredibly, by the time that these roving fur-balls were done devouring every bid they could hit, Tuesday had given back more than everything gained for the broadest of U.S. large cap equity indices since the bell rang on Monday morning. Take a look. 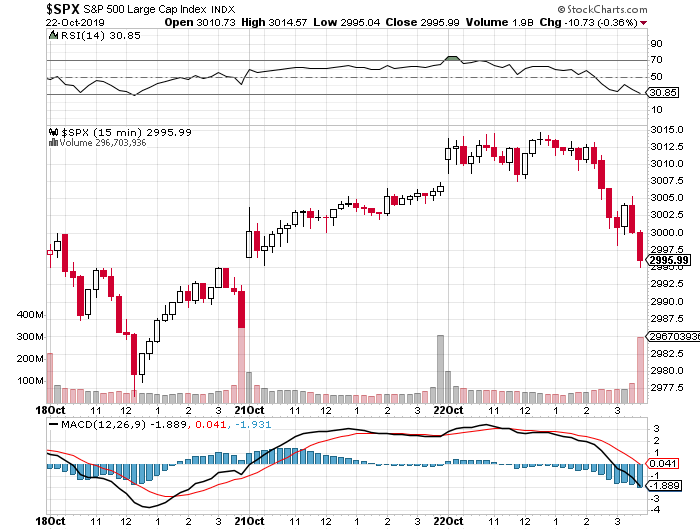 The cause of such a quick change in course? Some may blame weaker than hoped for September Existing Home Sales, though clearly, I think it likely a reaction to the Brexit voting in London. While the best case scenario for the condition of global trade, at least in the short term had been for an amicable Brexit deal, the delay asked for by Parliament now puts the possibility of a "no deal" Brexit back in play.

What that does to us Yanks, is put a bid under the U.S. dollar, and squeeze the long end of the U.S. Treasury yield curve as short-term money seeks safe haven. That's also why Gold futures found a bid last night. On that note, I am sure that most readers did notice the Tuesday afternoon upward movement for Crude oil futures despite that rising dollar strength. This movement came in response to reports that OPEC producers and those producers cooperating with OPEC were considering deeper cuts in production rates than those already agreed to when they meet later this year in Vienna. This would be the reason for the Energy sector's clear out-performance on Tuesday. However, as Wednesday morning matures, WTI futures appear to be responding negatively to dollar strength.

For the record, trading volume was indeed higher at the major exchanges on Tuesday, but still not high. Volume attributable to both the S&P 500 as well as the Nasdaq Composite fell well short of their respective 50 day simple moving averages. In other words... I see this selling pressure as merely another day spent working in the salt mines, unless the 3 month/10 year spread truly collapses. Then we'll have issues.

Round and round they go. Maybe one of the most fun of playground games. Not so much fun for investors when elite level chief executives play this game for much higher stakes. TITWTWLN... This is the way they went last night. Some acronym. So... Nike (NKE) CEO Mark Parker announces that he is leaving that post (that he has held since 2006) this January. Parker will stay on as Executive Chairman. With the stock +29% year to date, after having done a solid job in working the firm's supply chains around the trade war, that's probably a good thing. Nike has apparently hired ServiceNow (NOW) CEO John Donohoe to replace Parker in January. Donohoe, by the way, has been on Nike's board already for five years, and will remain in his role at ServiceNow through year's end in order to ensure a smooth transition. A smooth transition to who? That may be the best part of this story.

ServiceNow has turned around and hired former SAP (SAP) CEO Bill McDermott who ran that firm from 2010 through two weeks ago. You know, McDermott certainly did not sound like he was riding into the sunset on October 10th, and now we know why. So, Nike seems to be sort of treading water as the early morning hours pass, but ServiceNow? That's an overnight bloodbath for a stock that has already been under pressure, also recently lost their CFO, and has to report Q3 earnings on Wednesday evening with a chief executive at the helm who just resigned his position. Know what I think? I think that Bill McDermott is no screwball. I think that the Bill McDermott era ended quite successfully over at SAP. You may recall the pre-announced Q3 earnings. You may recall that SAP's market cap tripled during his tenure. ServiceNow is already growing sales, now that firm needs to grow margin. At SAP, McDermott knew how to create margin on much more pedestrian growth. 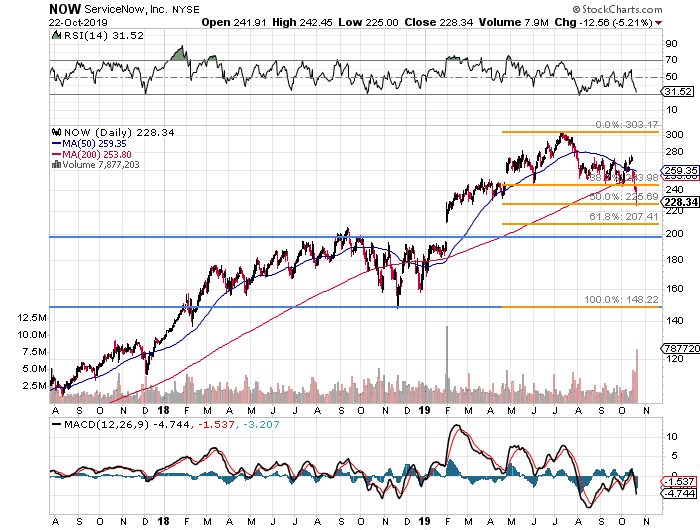 There is almost no way to judge how the shares will react this evening to not just the firm's Q3 results, but an earnings call run by management that is already headed for the exit. The shares are trading around $205 in the overnight session, down an additional 10% after giving up 12% on Tuesday.

Readers can see above that after the breakout in early 2019, the obvious gap never did fill. You know what they say... "gaps always fill." Well, today may just be that day. I look for potential regular session support at the 61.8% Fibonacci retracement level at $207. Should that spot not show up, I shudder to think about where this thing might go.

The only thing that I do know, is that I think I'll probably buy some. Hey, this stock, a former darling of mine was trading at the low end of a three month range with Donohoe running the show anyway. McDermott is coming in hot off of a great quarter. Problem is that they don't exchange roles for a couple of months.

As this will be tough to gauge, any initiation ahead of this evening's numbers will be merely entry level in size. For new readers, when I say that, this usually means about 1/8 of my intended position size, but it can be as little as anywhere from 1/16 to 1/10 depending on how gutless I'm feeling at the time. I will have to see what kinds of premiums are being paid for options related to NOW once that market opens as well.

This will be no sure thing. About the only thing that we do know is that this stock probably won't trade sideways from here. This breeds opportunity. Remember the first time you pulled the pin on a hand grenade? You held that spoon pretty tight, and then you could not believe how accurately you threw that darned thing. A 40 yard strike. That's because you focused solely on what you were doing. Focus.

And The Winner Is...

Nobody. I don't know. In the never ending saga known as the Defense Department's potential $10 billion award for their cloud computing contract, we have known for a considerable time that the two finalists for this deal were Microsoft (MSFT) and Amazon (AMZN) after both Oracle (ORCL) and International Business Machines (IBM) had been eliminated from contention.

Now, U.S. Defense Secretary Mark Esper has recused himself from making this final decision and handed off that task to his deputy David Norquist, claiming that his son worked for one of the original bidders without identifying where it is that his son worked. More delays? If you've been following this story, and you thought that this announcement had been due this past August, you'd be correct. When will this decision be made? My guess is not today, though Microsoft, a Sarge name does report this evening.

If the semis come out weak on Wednesday in response to the back yard beat-down going on at Texas Instruments (TXN) overnight, there would be a good chance that I take a look at old fave Lam Research (LRCX) going into that firm's digits tonight as well. Not the same business, could be some unjustified pin action.

As a shareholder of both firms, I just love the announcement made by Verizon (VZ) on Tuesday that certain customers could gain free access to the new Disney (DIS) Plus service slated to launch on November 12th. Talk about finding a way. Finding a way to compete with the Apple (AAPL) ecosystem, to compete with what AT&T (T) is doing, and of course to force an industry wide melee that will also include Amazon, Netflix (NFLX) , and Comcast (CMCSA) once everyone is lined up and ready to go. I may have covered my short, but I still think Netflix has the most to lose here. Flat the name? For now. Would not even consider a long position to be honest.

Get an email alert each time I write an article for Real Money. Click the "+Follow" next to my byline to this article.
TAGS: Earnings | Investing | Markets | Options | Stocks | Technical Analysis | Trading | Defense