It's a subjective, almost arbitrary concept when you think about it. At least in terms of a stock movement. Defining "too much" involves a lot of personal things about a trader. Too much compared to what? That question is answered based on your time frame, your risk tolerance, and your past experiences, to name a few.

When your only thesis for buying or shorting a stock is: it has gone down too much or it has gone up too much, then, you're probably dead in the water. The term "too much" needs qualifiers. It needs a system. It actually needs some discipline.

Let's take one of today's big movers: Eastman Kodak (KODK) . The company is back in the spotlight after regulators discovered no wrongdoing or misconduct in the company's loan process/award from the U.S. government. That news rocketed Kodak shares higher by 70% in the pre-market Monday.

Well, what about the fact, even after the jump, the stock is still down 80% from its all-time high?

See how easy the game of too much is to play? So, bring some perspective to the game.

If you're looking at a 5-minute chart or an hourly chart, then maybe KODK is extended. You immediately saw overbought in the stochastics and parabolic stop-and-reverse flipped bearish quickly this morning. 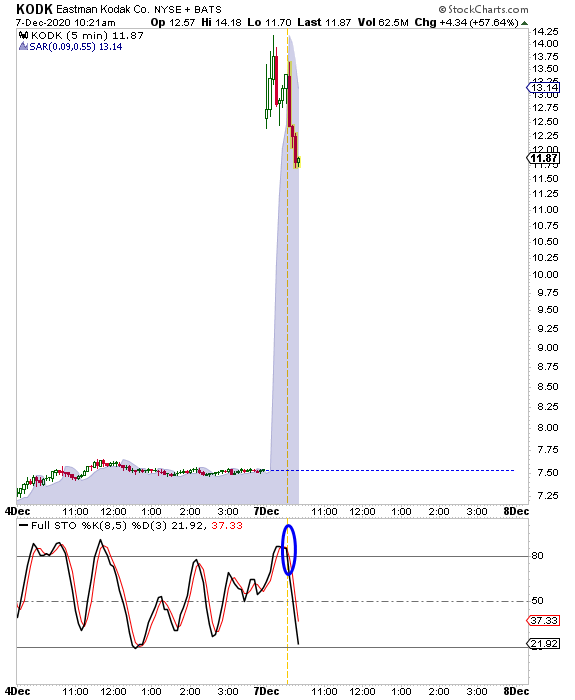 If you're looking at a daily chart, this could be the start of another leg higher, so it is tough to get overly bearish. Today is the first breakout since September. That push higher lasted three days. The one before it faded quickly. And the one in July was epic. That means this move requires a trader to sit on their hands today. If I were trading it, I'd prefer to wait until tomorrow and buy a break above today's open. If we close today above the open, then I would be a buyer of green tomorrow. If neither of those happen, then I would expect a move more like early September rather than late September. 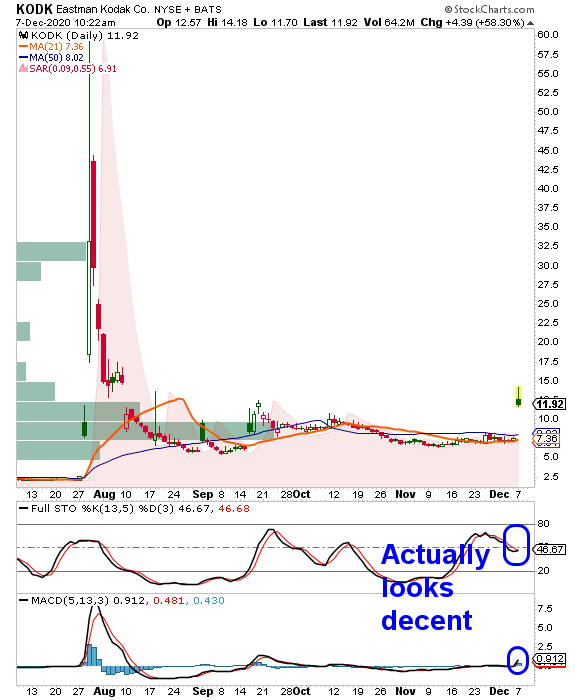 If you're looking at a weekly chart, this is a barely a blip. The weekly is actually coming out of oversold territory on the Full Stochastics. The price action is a breakout from a wedge pattern. The $15 level has become clear resistance as it served as the big retracement in August plus the high in September. If I were only keying on one number, it would be a push above $15. That's where I feel like the rubber meets the road. 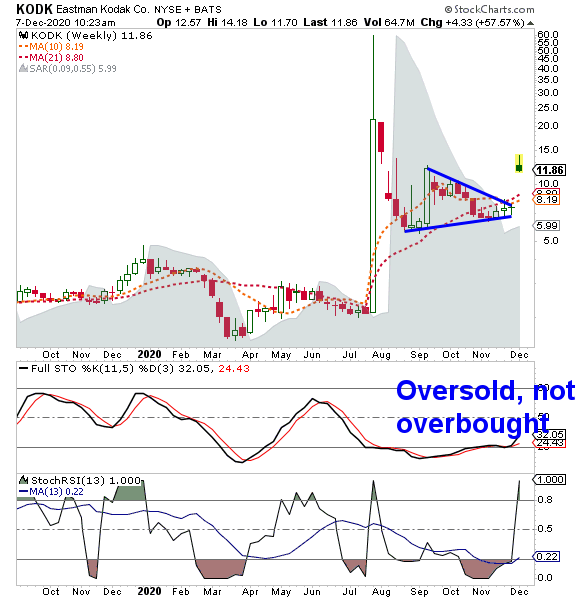 Get an email alert each time I write an article for Real Money. Click the "+Follow" next to my byline to this article.
TAGS: Investing | Markets | Stocks | Technical Analysis | Trading | Software & Services | Technology | Technology Hardware & Equipment