On the list of most traded stocks noted during Wednesday night's Mad Money program was MGM Resorts Int'l (MGM) . Cramer was not a fan of MGM which will be crippled for a long time to come.

Let's check out the charts and indicators and the odds of picking a winner.

In this daily bar chart of MGM, below, we can see that prices declined sharply from January to March. Trading volume became very heavy in March with several days seeing more than 50-million shares traded.
Prices rose four-fold into early June from $6 to $2 but stopped short of the declining 200-day moving average line. We are likely to see a break below the 50-day moving average line today.
Trading remained very active but the On-Balance-Volume (OBV) moved up in "fits and starts" telling us that aggressive buying and aggressive selling came and went frequently. Buyers did not stick around for long.
The Moving Average Convergence Divergence (MACD) oscillator did not cross the zero line for a buy signal until late May.

In this weekly bar chart of MGM, below, we can see a less than bullish picture. Prices have rebounded since the March nadir but still lie below the declining 40-week moving average line. The weekly trading volume has been unusually heavy compared to the activity level last year.
Notice the movement in the weekly OBV line - choppy movement in March and April, and then only a temporary surge to the upside in May. This is not the pattern that strong stocks show.
The MACD oscillator took until late May to cross to the upside for a cover shorts buy signal. Not a strong trending market.

In this daily Point and Figure chart of MGM, below, the chart indicates a potential downside price target in the $14.50 area but we could see further weakness as the volume by price bars on the left scale do not show significant support.
Notice the big bars above the market? 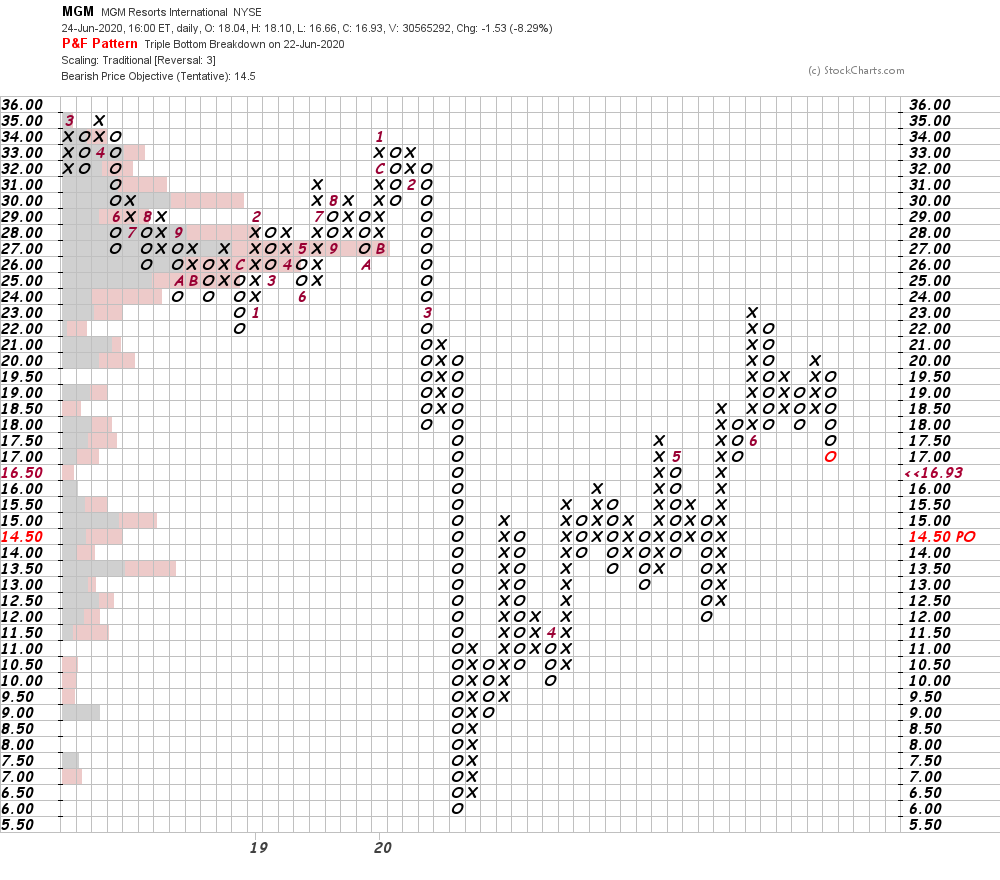 Bottom line strategy: The volume data and the On-Balance-Volume line moves tell you that MGM has become a huge vehicle for short-term traders. There may not be any clocks in the casinos but traders know when it is time to leave.
Get an email alert each time I write an article for Real Money. Click the "+Follow" next to my byline to this article.
TAGS: Economy | Investing | Markets | Stocks | Technical Analysis | Trading | Gaming | Mad Money | Coronavirus