Thinking in terms of absolutes when trading and investing is a mistake. Obviously, I can't say that with any absolute certainty or the thesis would collapse upon itself.

Too early in the week for irony?

Back to the task at hand with today's focus on short-term trades. We've seen a lot of volatility in the cannabis sector over the past several months, but the last four days, in particular, have been a whipsaw of terror for traders late on their entry or short and tight on stops. I'm not immune. This is where absolutes come into play, or shouldn't. There's nothing to say that just because you bought a stock and then either stopped out for a loss or sold for a profit that you cannot re-enter the stock again whether it be at the same price, a lower price, or a higher price.

Let's take a look at OrganiGram. Things appeared dire on October 10th. The stock closed out at lows after a rough day, but Friday started strong. A trader may have bought that first surge (1) once resistance from October 10th was broken within the first 15 minutes of trade. Unfortunately, they may have been stopped out at the purple circle (2) as the stock retraced to their original entry area. Obviously, disappointing, but with the risk of shares retracing the early morning move, it can be seen as solid risk management. 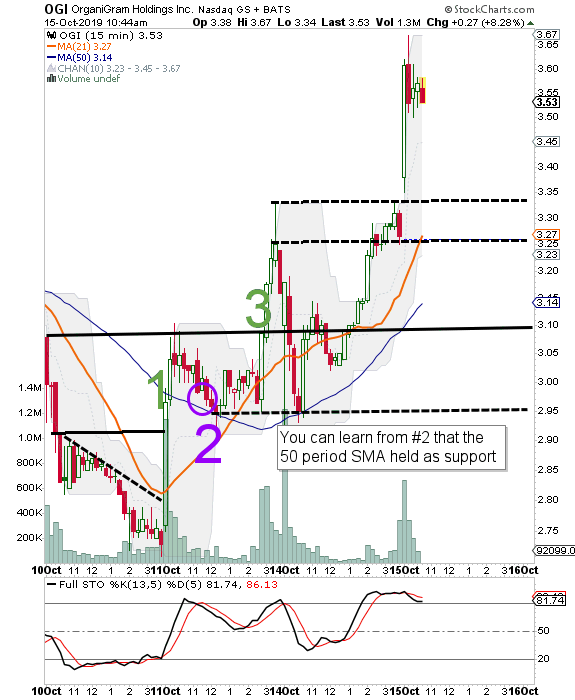 Late in the day, shares rally back above three before surging late day and pulling our trader back in on the long side when the morning high is broken. Later, they might discover this push was thanks to a newsletter pump by a well-known penny stock trader, but price action is price action.

Monday morning brings another push with a few possibilities. First, the trader could once again use their entry as a stop. Second, the trader could set up a trail closer to price to make certain they would capture at least some profits. Third, the trader could use and learn from the initial stop. That lower level offers not only a closing stop but a hint that the 50-period simple moving average could be considered the stop area.

If the first choice is made (stop set at the entry), then once again the trader would get flipped out of the position flat. In this world of no commission trading that isn't the worst thing in the world, but it probably puts you on the sidelines with frustration. Additionally, the strategy isn't working well. Fool me once, shame on you. Fool me twice, I better try something else.

If the trader used the second option, then they likely netted some profit from the trader before being stopped out on the second half flat. There's enough there to repeat the trade when the closing high of $3.25 (shortly after point 3) is broken the next time.

If the trader went with the third option, then they rode out the trade through a $0.15 drawdown (around 5%) and sweated out 30 minutes of possible stops before watching their position climb to a double-digit gain. With this size gain, my move would be to take half and tighten the trail, but we could see the trader continue to ride that 50-period SMA as their stop.

There are obvious deviations here. The trade could look to buy that support level on a second entry. They could scale in some other fashion with a different moving average or another exit approach that fits their goals and risk tolerance. The point here is an exit doesn't have to be permanent. It is part of a risk management strategy, not an absolute end of a trade.

Get an email alert each time I write an article for Real Money. Click the "+Follow" next to my byline to this article.
TAGS: Investing | Options | Stocks | Technical Analysis | Trading | Canada | Cannabis