Trading volume was light at both major exchanges. There was some wiggle in equity prices, primarily to the downside early on Monday. That did not hold. What would you call that? I would call it some mild profit taking ahead of the Fed, ahead of trade talks with China. Common behavior in front of news events with prices at or near their recent (or all-time) highs. Need proof? Where was the wiggle? Software. Telecom. Banks. In other words, where there were recent profits to take.

Strength was seen in largely defensive sectors, such as Staples and bond proxies. Expect volume, with notable exception of action in specific names reporting earnings, to remain on the light side right through later tomorrow (Wednesday) afternoon. The action usually does heat up in response to statements made on monetary policy. Interestingly, I think, is the fact that Nasdaq Composite trading volume has not touched it's own 50 day SMA (yes, trading volumes have their own moving averages) since June 28th. My guess is that changes by Wednesday, but I don't recall another recent occurrence where either of our two broadest, large cap indices went an entire calendar month without experiencing a single above trend day in terms of volume. Are the good citizens just on vacation? Did they get a great parking spot on Monday. Still odd.

Shares of Beyond Meat (BYND) were "slaughtered" overnight in response but not so much to earnings and guidance. Those numbers were strong but more in reaction to the fact that the firm would sell an additional 250K shares, as well as another 3 million shares by early shareholders in secondary offerings. This move I applaud, as the primary catalyst not just for the meteoric 700% or so rise in the market price for BYND shares, but for the extreme volatility as well as the difficult short position has been, and even with these additional shares, will be a scarcity of available equity.

The knee-jerk after the Q2 earnings data hit the tape was actually to the upside. EPS printed at -$0.25, a significant miss. Nobody cares. Revenue of $67.25 million was good for year over year growth of 287.2%. Within that number, restaurant and food service grew at a 483% clip, while retail sales dwindled along at a "pedestrian" 192% increase. These sales provided for an environment where gross profit as a percentage of sales exploded to the upside as did adjusted EBITDA.

As for the future, Beyond Meat sees revenue topping $240 million for the full year, up from "conservative" prior guidance of $210 million. That will depend on an ability to expand beyond existing deals in place with the likes of Dunkin' Brands (DNKN) initiating sales of the product in New York City whose intent is to go national. Very interesting, I found that the brands within Restaurant Brands International (QSR) each have their own deals in place. Coffee house chain Tim Hortons sells a Beyond Meat sausage sandwich, while Fast Food chain Burger King works with Beyond Meat rival Impossible Foods. As for QSR's third chain, Popeye's Louisiana Kitchen, I don't think they are yet on board with the whole meat substitute business, at least not yet, not publicly.

That brings us to the big fish out there so to speak. Why the name draws such interest, such speculation. Whoever (if anyone) in this business lands McDonald's (MCD) wins the prize. That would bring in greater fund participation, which in turn would only exacerbate this condition of scarcity that we are trying to wrap our heads around. So, who are these "early shareholders" who will sell 3 million shares to the public? You may have heard of them. BYND CEO Ethan Brown, Kleiner Perkins (VC firm), General Mills (GIS) , and the Gates (as in Bill) Frontier Fund. As a trader, I wish somewhat selfishly that this firm would offer considerably more equity to the public. Given the fact that this entire business is likely in it's infancy, I understand management's caution.

News broke late on Monday afternoon that Netflix (NFLX) was going to pour a lot of money into it's own content creation. I mean, the firm had already been expected to spend $15 billion on programming just this year alone as the likes of The Walt Disney Co. (DIS) , AT&T (T) , and others pull back on just how available their own libraries will be to a rival ahead of a much more competitive environment for the consumer's streaming entertainment dollar.

This particular news would be about three high profile movies, not very likely to ever be released (at least broadly) theatrically, still likely to cost the firm an aggregate $520 million to make. Oh, the movies will feature well known talent, as well as special visual effects. You've got to wonder though... well... you don't have to wonder. You can do what you want. I wonder how this pays off, especially, given that the firm has to borrow in size in order to quickly stock it's own content library, just why would there not be an effort to at least partially offset these expenses through mass exposure to the box office? Disney Plus is going to have a ton of Disney content in the library from the get-go. Disney, the planetary content king in my opinion, will never shy away from turning a few bucks at the box office prior to adding a title to the streaming service. Or maybe a record $7.67 billion in global 2019 box office gate before August doesn't sound interesting enough? 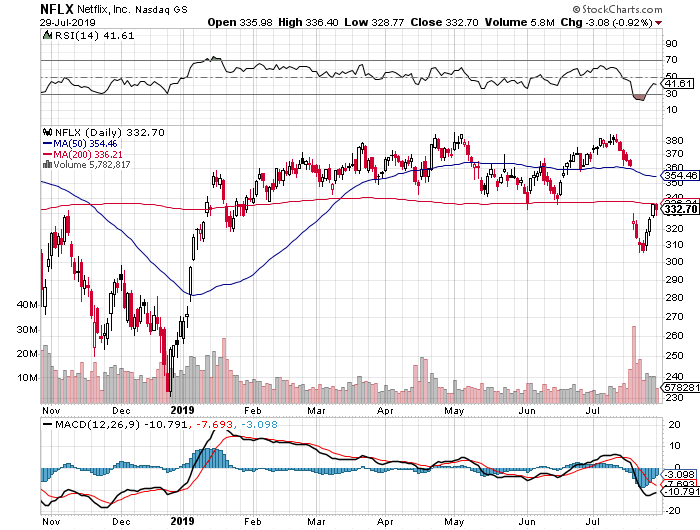 The shares have come back quite nicely off of the initial response to the disastrous Q2 miss on subscriber growth. Short-term, the shares have hit resistance in the same spot two sessions in a row... that spot being the 200 day SMA ($336). Longer term, the firm hopefully will do what they have to do to land these blockbuster type films on the big screen where they can garner broad attention. A failure to do so in my opinion would cement this name as a medium to longer term short idea.

Of course, I will almost never trade a high priced stock valued at 131 times 12 month's trailing earnings long-term from the short side. I am not built that way. I would take an early profit from the short side even when I am pretty sure that I am right. Short-term however, I think if we see these shares fail here again, or even fail to retake that red line... that the name is short-able for a trade. Tight panic point. No higher than $340. The cult is still powerful in this stock. $336 retaken? I sit on my hands.

Apple (AAPL) reports on Tuesday night, a day ahead of the Fed. The shares have run into earnings. That makes them dangerous. Many of you folks are long these shares. How does one protect these gains. Sell a partial? Buy puts expiring this Friday? That'll cost you. Let me show you what I am talking about. 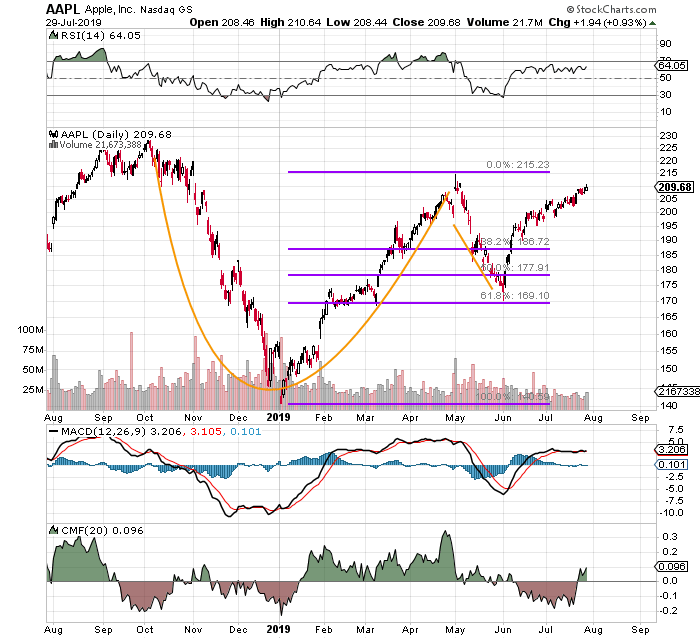 Look familiar? This chart should. I've used it before. Just the rebound off of the giant cup with handle is longer and the last sale is higher since the last time I posted this one. The implication of this chart remains in force. My target price for Apple is $240. That's unchanged. The shares need to catapult off of a $215 pivot in order to get there. That's still true. A panic point of $188 still preserves enough of a profit. Must be more that we can do than just wait to see if we get punched in the nose or not.

A trader could... sell a partial on Tuesday (at least 100 shares as long as that is a minority stake), and sell $202.50 puts (one contract per 100 shares of equity sold) expiring this Friday. Those went out at about $1.90 last night. What this does at a last sale of $209.68 (you may have to adjust) is bring in that $1.90 in premium, while reducing equity risk at this price. Should the shares sell off in response to earnings, even if much lower than $202.50, the trader still extracted $7.18 from the trade in addition to the premium realized. The risk is in opportunity lost should the shares rise after earnings, but the trader has already in effect accounted for the first $1.90.

Get an email alert each time I write an article for Real Money. Click the "+Follow" next to my byline to this article.
TAGS: Earnings | Federal Reserve | Investing | Markets | Options | Stocks | Technical Analysis | Trading