There may have been a better stock in percentage terms at some point in history. I hear tulip bulbs were pretty hot there for a while. Did maybe someone create a business of delivering them to people's homes? I don't know. Apple (AAPL) has been called the greatest consumer electronics company in history more than once. When I was a kid, I was pretty sure that McDonald's (MCD) was the greatest company of all-time. Not only did McDonald's sell what at the time seemed like great cheeseburgers, but in conjunction with Coca Cola (KO) , Levi Strauss (LEVI) , and Ronald Reagan they pretty much won the Cold War. That was then.

This is now. Amazon (AMZN) in my opinion is the greatest company of all-time. Yes, I hear all the time how much of an evil company Amazon is. I hear that founder and CEO Jeff Bezos is a man whose politics may not align so perfectly with my own. What do I say to that? I say that when I was sick, as in really sick... Amazon, and to be fair... Walmart (WMT) kept household goods coming to my address. I say that when I was too sick to get groceries to my home, that Whole Foods delivered even when the other grocers were overwhelmed and not taking on new customers for delivery.

I say that over the years, many years... that Jeff Bezos may have been making himself one of the richest people in the world, he was also making me money, simply because I paid attention. This was a guy you could invest in, and so was his company. I also say that when the pandemic put my country on its knees, and unemployment skyrocketed, that Amazon hired new people hand over fist. Full time work in many cases... with benefits.

Sure, Amazon reported the firm's fourth quarter performance on Tuesday afternoon. The numbers almost defy imagination. Still the headline story was about the CEO himself. The 57-year-old Bezos will step aside later this year as CEO, sometime in the third quarter to become Executive Chairman. Bezos says that he will stay involved in key Amazon initiatives, but would like to focus on other priorities such as Blue Origin, his space exploration company, The Washington Post, his newspaper, and climate change.

Bezos will be replaced in the role of running the company on a day to day basis by Andy Jassy. Jassy joined Amazon in 1997 and has run the wildly successful Amazon Web Services since its inception way back in 2003. Wall Street already knows and is comfortable with Jassy. Markets waffled on the news overnight, but seem to be taking it quite well now. My instinct was at first to make a sale, and then try to get back in later, an instinct I have not yet acted on.

If anything, Amazon is complex, so we'll start with the overview and then break it down through the segments. For Q4 2020, Amazon posted EPS of $14.09, absolutely obliterating the street's expectations by almost $7. That's right... almost double expectations The firm did this on revenue of $125.55 billion. Not only was it the firm's first $100 billion quarter, the number was also good for year over year growth of 43.6%, and beat the street by almost $6 billion. That's right... $6 billion.

North American revenue landed at $75.35 billion, beating consensus of just under $74 billion, while International sales of $37.47 billion crushed estimates of $32.5 billion. Operating income ended the quarter at $6.87 billion, beating sell side projections by almost $2.5 billion, while Operating Margin climbed up to 5.5%, despite pandemic related expenses. This was up from 5.3% for Q4 2019, and well above the 3.7% analysts were looking for. Free Cash Flow? Glad you asked. A mere $31 billion for the past 12 months, up 30% from 2019. Mere bag of shells.

Just a heads up. Once you access the press release, this stuff is way down at the bottom of quite the lengthy document. Amazon does not skimp on information. Nor, do they, you may have noticed... take adjustments even in a global pandemic. The numbers are the numbers. Period.

Notes: I am always amazed at the sheer size of Amazon's businesses. Even the smallest among them is a nice sized business. By the way, that smallest business... physical stores was the only business that showed a contraction in sales for the quarter, certainly impacted by the pandemic. Every single other business showed eye popping growth. Even AWS where both growth and (still high) margin are starting to slow just a bit relative to competitors such as Microsoft's (MSFT) Azure and Alphabet's (GOOGL) Google Cloud, one must understand that AWS is much larger than these competitors, and just how incredible 28% growth is at that size.

Moving forward, Amazon expects Q1 net sales to land in between $100 billion and $106 billion, above Wall Street estimates in the $96 billion area. At the high end this would be growth of 40%, which would be in line with revenue growth the past three quarters of 40%, 37% and this report's 43.6%. That's almost like "start-up" type growth. Operating Income is now expected to end the current quarter within a range spanning from $3 billion to $6.5 billion. The street is looking for something in the high $5 billion's, so this could be seen as something of a disappointment until one understands that Amazon also expects to spend a cool $2 billion on combating Covid-19. Then again... Amazon is almost always conservative in projecting forward guidance. 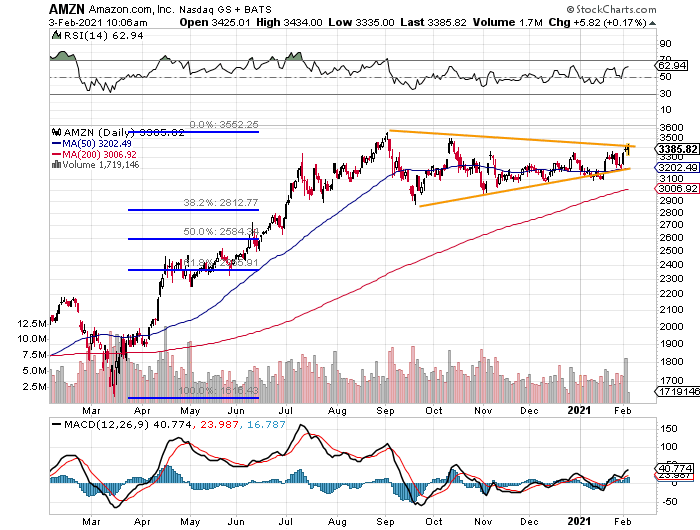 Readers will see that as Amazon rallied off of last March's pandemic lows, that rally suffered an almost perfect 38.2% Fibonacci retracement in September of that March through August rise. The interesting thing is that as the shares of AMZN have based, or consolidated... that support level had been established (in July) prior to the rally's peak.

Now what I had seen as a basing pattern, also probably presents at this point as a large closing pennant. What this means to me is that a heightened period of volatility is coming and probably is not too far off. From either a fundamental, or technical perspective, all the ducks are lined up in a neat and tidy row for an upside move. The big doubt in the back of my head though, is that Jeff Bezos wants to take his eye off of the (this) ball to do other things.

Nothing at all against Jassy, but this is undeniably... a risk.

So, for me... the pivot remains the early September high of roughly $3550. My price target remains $4200. My panic point remains $2970. None of that changes, but I can almost guarantee that I am going to day trade at least part of my position. I can't help it. I feel that for now, AMZN is a trade is a short term sell, while for investors this name remains a buy. Do you understand? There is no reason I see that if some sell side momentum builds that AMZN can not threaten its own 50 day SMA ($3202), and wouldn't it have been nice to have sold some up here in order to buy whatever was sold down there? On that note when this name eventually makes a run at pivot, I will want my long position at full strength. I guess I'll see where AMZN is trading once this piece is published as I can not front run my own article, but this is how I am thinking.

Get an email alert each time I write an article for Real Money. Click the "+Follow" next to my byline to this article.
TAGS: Earnings | Investing | Markets | Stocks | Technical Analysis | Trading | Retail | E-Commerce | Jeff Bezos