First, Bloomberg News broke the story that Adobe Inc. (ADBE) was close to acquiring privately held, San Francisco-based on-line design software provider Figma. Then the news broke. Adobe had agreed to a half stock/half cash deal valued at roughly $20B to bring Figma in house.

Figma's platform permits clients to collaborate on software as they build it. Figma appealed to individuals and large businesses alike, and became popular as many tech employees worked from home during the pandemic.

Figma counts Alphabet (GOOGL) , Kimberly Clark (KMB) and Airbnb (ABNB) among its customers. Adobe expects the cash half of the deal to be financed through cash on hand, and if need be, in partial... a term loan. About 6M additional restricted shares will be granted to Figma personnel that will not vest until four years after the deal closes. The deal is expected to close in 2023. Dylan Fields, founder and CEO of Figma, will stay on to lead this business, which will report to Adobe's president of Digital Media, David Wadhwani.

Oh, and while Adobe was making announcements, the firm went ahead and released its fiscal third quarter financial results that were not originally due until after Thursday's closing bell.

I don't think anyone would call Adobe's performance for this quarter or for recent quarters "lousy", that said... There is no doubt that the firm has reached a place where growth is getting tougher to come by and it makes sense to go out and purchase some growth. For the three months ended September 2nd, Adobe posted adjusted EPS of $3.40 (GAAP EPS: $2.42) on revenue of $4.433B.

While the bottom line print did beat Wall Street, the top line number narrowly missed expectations. Revenue grew 12.4% (15% in constant currency) for the quarter, marking the firm's fourth consecutive quarter of growth of less than 15% that came after four quarters of growth of 20% or greater.

- Total Digital Media ARR ended the quarter at $13.4B.

For the current (fiscal fourth) quarter, Adobe sees total revenue generation of $4.52B. This would be good for rough growth of 10%, but is below the $4.6B that Wall Street was looking for. The Digital Media segment is seen growing revenue 10% (14% in cc), while bringing in $550M in net new ARR.

If not for the above mentioned Figma deal, I would have blessed this balance sheet as Adobe could have paid off its entire debt-load out of pocket. Obviously, committing to a $20B deal, half with stock and half with cash changes that. The firm will need to add new debt in order to close the deal, perhaps the cash half of the deal will be majority borrowed. Adobe repurchased about 5.1M shares of common stock during the quarter reported. I have not heard anything, but perhaps it would be wise to slow that program down.

I would love to be "all in" on Adobe right now. The stock is down for the day, and down 54.2% from its November 2021 high. That said, the shares trade at 27 times forward looking earnings, but can no longer be considered a growth stock. ADBE can drive cash flow and drive profits, growth for this name is yesterday's roast beef. I like the idea of buying growth. That's what another former Sarge name, Salesforce (CRM) has become famous for.

As much as I like buying growth when organic growth becomes difficult, I am unsure about this deal. I could be wrong, but is not the whole "work from anywhere" thing at least starting to unwind? That's what put Figma on Adobe's radar. How to value a pandemic play in if not a post-pandemic era, at least a post-pandemic economic crisis era going into or very close to an outright economic recession?

This may work down the road, but I see a period of adjustment and digestion. ADBE has done well for me in the past. Past performance is not indicative of future results. 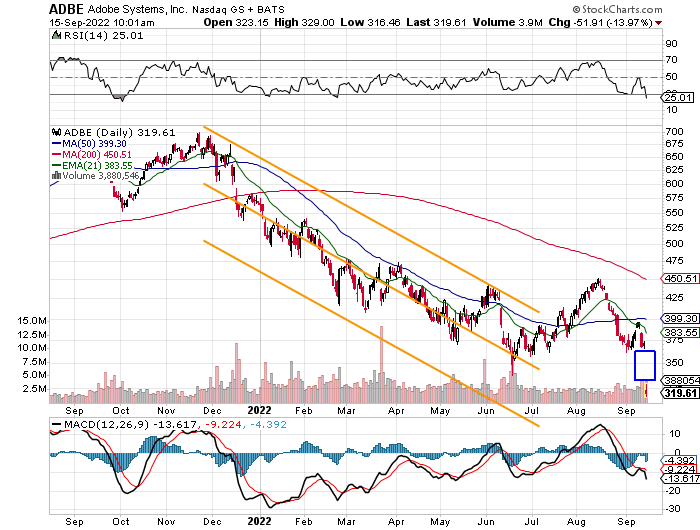 My guess is that ADBE will be a decent trader for a little while. For investors, though... this is tough. Readers will see that ADBE had been in a serious downtrend into June and broke out of that downward sloping range in July. This morning's gap down open places the stock right back in that trend.

The stock is trading well below all three key moving averages, which means that all three of those averages will continue to sag. This will scare off portfolio managers. Relative strength is more than relatively weak. All three components of the daily MACD are negative. It's really hard to find something I like about this chart.

If I were tempted to take a bullish position in ADBE, I would rather get long the January $325 calls for about $30 and sell the January $340 calls for about $24, than buy the equity. This way instead of laying out $320 a share with that much worth of risk, the trader would be risking a net $6 (x100 per contract) trying to win back $15. Risk management.

Get an email alert each time I write an article for Real Money. Click the "+Follow" next to my byline to this article.
TAGS: Mergers and Acquisitions | Earnings | Investing | Stocks | Technical Analysis | Trading | Software & Services