During Thursday night's "Lightning Round" segment of Mad Money one caller quizzed Jim Cramer about Virgin Galactic Holdings (SPCE) : "If you're a younger investor and can wait a long time, then maybe, but this is not right for older investors," commented Cramer.

The last time we did a countdown with SPCE was back on October 9  where I wrote, "If we look hard enough we can find some positive signals on the charts of SPCE but that is not the way I try to find recommendations."

Let's check out the charts again of this company trying to develop commercial spacecraft for wealthy tourists and science missions.
In this daily bar chart of SPCE, below, we can see that prices went nowhere until late November when SPCE broke out on the upside for a rally into early December. A correction followed before a quick rally to the $60 area in February. Prices quickly gave back those gains and by early the rally was "history".
Prices bounced from the early March low but stalled well below the declining 50-day moving average line. The March low touched the rising 200-day moving average line and traders often consider that a buying opportunity. Unfortunately, I do not see trading volume rising after this early March low which tells me that traders are seeing this dip as an opportunity to go long.
The On-Balance-Volume (OBV) line is still pointed down from early February telling me that sellers of SPCE are still more aggressive. The Moving Average Convergence Divergence (MACD) oscillator is below the zero line in sell territory.

In this weekly bar chart of SPCE, below, we do not have a lot of price history to work with but the intermediate-term trend is up as prices are above the rising 40-week moving average line. Trading volume shows two bulges as prices rallied but the bigger picture is not bullish.
The OBV line shows a rise until early February. The MACD oscillator has crossed to the downside for a take profit sell signal.

In this daily Point and Figure chart of SPCE, below, we see that prices have met a downside price target in the $34 area. 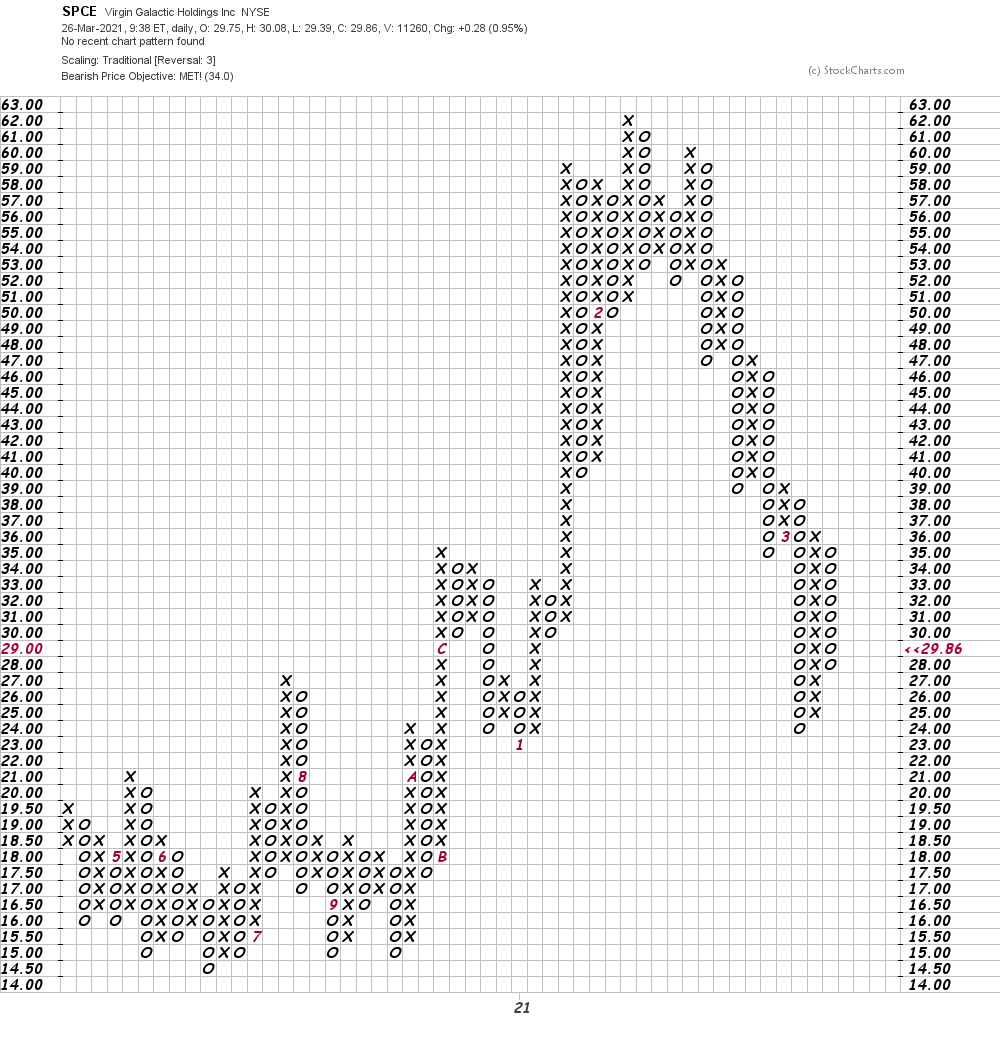 In this weekly Point and Figure chart of SPCE, below, we used close only price data. Here the software projects a tentative upside price target in the $60 area.

Bottom line strategy: In our October review we said, "If we look hard enough we can find some positive signals on the charts of SPCE but that is not the way I try to find recommendations." The charts are mixed now which I guess is an improvement but they still do not inspire me to be a buyer. I guess I will continue to spend my tourist dollars on hotels in the Caribbean.
Get an email alert each time I write an article for Real Money. Click the "+Follow" next to my byline to this article.
TAGS: Investing | Stocks | Technical Analysis | Trading | Aerospace | Transportation | Mad Money