On Monday, highly rated Brian Fitzgerald of Wells Fargo maintained a "buy" rating on Uber Technologies (UBER) , setting a price target of $78. Fitzgerald looks for a well above consensus EPS of $0.61 when UBER reports their third quarter numbers in early November. Readers will recall that UBER surprised us all when reporting a surprise profit for the second quarter on 75% revenue growth. Thank you, DiDi (DIDI) . For this quarter, Wall Street in general is looking for a loss of $0.37 per share on revenue of roughly $4.45 billion, which would be good for growth of 42% or so.

On Tuesday, UBER, guided third quarter gross bookings to between $22.8 billion and $23.2 billion, narrowing prior guidance of $22 billion to $24 billion. However, the firm took adjusted EBITDA to a range spanning $-25 million to $25 million, much better that the $-100 million that the firm had previously led Wall Street to. For the fourth quarter, UBER now expects to post adjusted EBITDA of $0 to $100 million. The stock was up significantly (+6%-ish) in Tuesday morning pre-opening trade.

CEO Dara Khosrowshahi appeared on CNBC on Tuesday morning and sounded confident. Apparently, and according to the CEO, U.S. volumes over the past week were the highest since March. The firm has signed up 5% more drivers to the platform over the past two weeks.

Does this ride hailing business have a future?

I have no doubt.

Is the food delivery business worth it?

While being capital intensive, the business has been a gem throughout the pandemic both keeping the firm going and building brand loyalty with consumers.

Is UBER going to be profitable (GAAP, not adjusted) anytime soon?

Probably not. (Just an opinion) 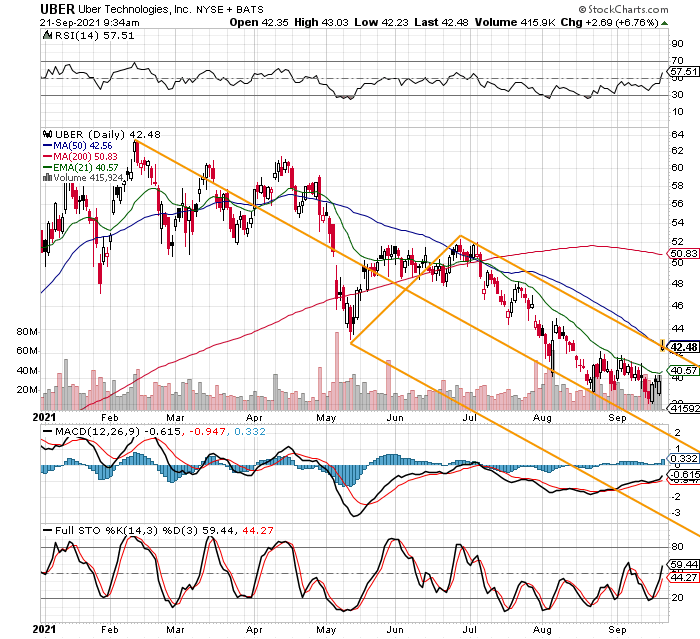 I see the shares trading above $42, which not only retakes the 21 day EMA, but potentially presses the shares up against the upper trendline on our downward sloping Pitchfork model, in place since early February... all while threatening to either take or hit resistance at the 50 day SMA ($42.56).

Note: The purchase of the $45 call is to protect the trader, now short equity at the $45 level through Friday, reducing the risk to retail trader-sized manageability.

Target Price: The central trend line of the Pitchfork, currently about $37.50.

Get an email alert each time I write an article for Real Money. Click the "+Follow" next to my byline to this article.
TAGS: Earnings | Economy | Investing | Stocks | Technical Analysis | Trading | Food & Drink | Transportation