The Underbelly of Equity Index Resistance

For a second consecutive session the S&P 500, and to a lesser degree the Nasdaq Composite, scraped the underbelly of their respective 200 day simple moving averages. What's obvious is that for now this will be the focus of those who read charts for the algo traders. Also for a second straight session, European markets opened under mild pressure. On Wednesday, it was German Factory Orders for December that badly disappointed. This morning (Thursday), it was German Industrial Production for that same month. On Friday morning, Destatis will release data for Germany's trade balance for that month.

Why is this interesting? Next week, U.S. Treasury Secretary Steven Mnuchin heads to Beijing in an effort to resume trade talks that hopefully result in some kind of agreement by the March 2 dually imposed deadline. This would keep tariffs on many Chinese goods imported into the U.S. from being increased. Keep in mind that the EU is a major trading partner for the United States, and that Germany in deficit terms, is in third place, a distant third behind China and Japan, but third nonetheless. Just common sense. What does one do when one sees a business opponent down on their luck? I don't mean to ruffle any feathers, but one presses their advantage when they have one. That's the law of the jungle. You have seen revisions to GDP forecasts for the entire eurozone on Thursday morning? These guys are in a jam. They'll have to play ball if the U.S. administration gets tough. The marketplace will see this as a risk not yet priced in. Should the German economy contract in Q1 (now expected), this would put that economy in a state of contraction in two of three quarters.

Does the U.S. administration have the political capital to spend with China still unresolved? Does a slowing Chinese economy pressure the Xi administration enough to make necessary structural changes? Does blood in the water elsewhere mean that the Trump administration prioritizes differently on trade. Should the UK be invited into the USMCA (NAFTA 2.0) deal? That would be one way to feel Germany out a bit while focusing on China. I don't know, and neither does the market just yet. Just a kid from the neighborhood.

Don't call me a liberal because I am not. Don't call me an alarmist because I am not really one of those either, though I will use that tool to serve a purpose. You can call me a survivalist, though, because somehow, with a little effort aided by the grace of God... so far, so good. This is why nearly identical articles that ran on Wednesday evening at both the Wall Street Journal and Financial Times websites caught my interest. For a number of years, I really do not think that there has been any real denial that the planet is warming rapidly. That's obvious. The denial argument has been over the cause as several other planets with no inhabitants in our solar system have also seen a warming trend in recent years.

Fact are facts though, even if politically inconvenient. It becomes difficult to miss that according to NOAA (National Oceanic and Atmospheric Administration) data that nine of the 10 hottest years on record are post-2005, and that the warmest five years are indeed the last five. While we do not really know beyond doubt that carbon emissions have caused this warming, we do know that carbon emissions are at record levels at the same time that average temperatures seem to be. We also know that expensive and deadly "hundred year" storms are no longer really "hundred year" storms but far more common.

I do not have answers here. I can at least pretend to understand and interpret the impacts of monetary and fiscal policy upon an economy. At least human response is the key ingredient there. This is different though. The Met office in the UK now expects the next five years to continue this trend while, according to the Financial Times, the lion's share of this warming will take place in northern climes.

My thoughts here are apolitical. Just thinking... with populations continuing to grow into places previously less inhabited, with the costs of storm damage rising exponentially, does it not make sense to create a separate portfolio made up of equities that will benefit -- as sick as that sounds -- when an area needs to rebuild? This may help pay for one's own emergency needs at an individual moment of crisis.

Thinking warehouse stores such as The Home Depot (HD) , thinking lumber.. maybe Weyerhaeuser (WY) , thinking construction equipment, both in manufacturing (CAT) , and in rental (URI) . Water desalination (ERII) ? Finally, this would also be where the troubled auto industry comes in as these events create large one time replacement needs at the expense of insurance companies. Expanded use of electric vehicles (TSLA) ? These are just ideas. There are many ways to think about this, but I think we better adapt. Be able.

The shares are trading at nearly a 10% premium to the closing price. In fact, these shares are up a rough 50% from their December lows, and are now an incredible 133% above the 52 week lows. Were you long Chipotle Mexican Grill (CMG) ? No? Neither was I. If you were, sincerely... well done, my friends.

The firm reported Q4 EPS that beat by 32 cents on revenue growth of 10.8% that beat by $40 million. That's not really the story though. The story at a far more base level is that the firm seems to have understood their issues, addressed those issues and somehow resumed their growth. It was back around the time of this firm's well documented problems that as a consumer I had given up on them as well. I had noticed that at least in the stores around my house out on Long Island that cleanliness had been an issue. Even though I had always thought the food to be delicious, I went elsewhere, and thought about shorting the stock. Thank goodness, I never acted on that idea, because it would have been a bad one.

As this firm improved food handling practices, and replaced the old system for food preparation, it would appear that consumer loyalty was still there. The key metric for me is the 4% growth in comparable sales for last year. The firm guides toward similar growth of 4% to 6% for this year, a range with a midpoint well above the industry consensus of 4.4%.

I had recently noticed, because I am the weirdo who counts cars in parking lots, and people on line, that the stores have had an increase in traffic. Maybe it's my imagination, but that traffic appears youthful to me, say early to late 20s on average, which is good. They'll be customers for a long time and they'll order on their mobile devices. 11% of the quarter's sales were made digitally. That's a year over year increase of 66%. 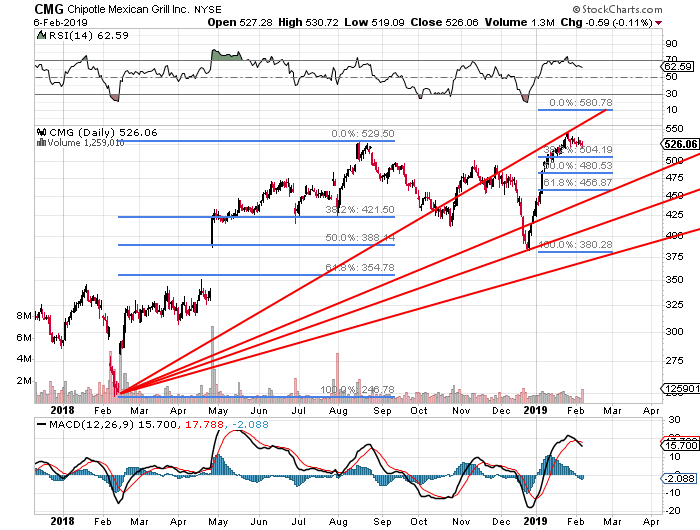 Obviously, I think we see the daily MACD recross this morning. I drew the Fibonacci Fan model for you just to illustrate rising support levels. If I were to place a Pitchfork model on this chart using the $580 level as the last sale, the center trend line if held moving forward would suggest a target price of something in the neighborhood of $625, well above even the most aggressively positive targets across the financial industry.

My thought is that as the morning progresses we will see a number of "hundred dollar" increases to target price with a number of reiterated buy ratings. Keyword reading algorithms will pick up on this. Adding this morning, would be a risky venture at these levels for the "flat the name" crowd. However, those already long should see very attractive premiums paid for calls priced $100 above the last sale expiring midyear. You owe it to yourself to at least take a look.

Get an email alert each time I write an article for Real Money. Click the "+Follow" next to my byline to this article.
TAGS: Earnings | Investing | Markets | Options | Stocks | Technical Analysis | Trading | Restaurants | China | Europe | Market Recon