Change in the air. There will be an algorithmic response. In addition to what we have already seen. There will be some profit taking across financial markets where maybe we have not yet seen any. You and I now stand at the edge of a change in business sentiment, as well as a change in business posture. Evolution in real time. Visible change? For the moment... nothing except for potential. Moving forward? Everything including potential. Potential for economic performance will extend to corporate performance.

Alone, contemplating strategies for the coming year, in the dark, the fire burns. The excitement builds. Push-ups. The morning count is already mounting. Adrenaline. Feed this beast. Join me. Alone, we are both formidable. Together, we are invincible. You and I... we stand on that hill, we look out over this expanse. No regrets, no fear, not ever. Fear is but for the wicked, and before us... it will be the wicked who shall tremble. We hunt, we take. We feast. We rock.

Just days after the House of Representatives finally got around to taking the USMCA deal that will replace the old NAFTA trade deal seriously, comes news that President Trump had agreed to a limited agreement on trade with China. A full Phase One trade deal? A Phase One deal would not be full in the first place. A trade peace? That's better.

Whatever this is, it is an undeniable positive primarily for U.S. and Chinese businesses, but also for businesses globally that might rely heavily upon prospects for global growth regardless of where it comes from. In addition, at the same time, there is suddenly a new level of certainty in Europe with the sweeping victory by the conservatives in the UK. Now, the UK and the EU can work on their own trade deal. Maybe after that, we can slap the letters "UK" on the already cumbersome USMCA. Then maybe a "J", and then an "SK". The ball has started rolling. Downhill.

The financial media has it that on Friday (today), ahead of the Sunday deadline for adding to the U.S. schedule for tariffs, the U.S. will instead postpone those tariffs, while reducing existing tariffs from current levels. In exchange, the Chinese side is expected to commit to the purchase of $50 billion worth of U.S. agricultural goods in 2020, in addition to undisclosed purchases in other areas that will include the energy space (Nat Gas?, WTI Crude?). Will the other, perhaps more important U.S. concerns (intellectual property theft, narrow foreign access to markets, forced sharing of technology) be addressed in this first thawing in tensions between the planet's two largest economies? My guess is that there will at least be a mention, and that included in this agreement will be "snap-back provision" where should Chinese behavior not live up to what is agreed to contractually, that an increased schedule of tariffs would be reimposed. Just in case you thought there would be no fodder for negative headlines through the coming year, there will be plenty.

Understand this, gang, from a corporate point of view. Increased certainty means increased capital expenditure across the entire economy. Reducing current tariffs by 50% will save U.S. businesses roughly $30 billion per annum. That, my friends is a corporate tax cut for those impacted. Higher revenue, lower expense. That, my friends is pure margin expansion. The IMF (International Monetary Fund) has estimated that the condition between the U.S. and China had shaved a rough 0.6% from U.S. GDP. How much of that does a Phase One agreement recapture? Well, a lot more than nothing, and Q4 GDP was already running at a 2% clip.

Right Down The Line

Gerry Rafferty? No. Sector performance. Should this agreement come off the way it reads overnight, the warmer relationship between the U.S. and China should increase demand on both sides of the Pacific, resulting in an improved environment for growth. This potential for growth spikes yields at the longer end of the U.S. Treasury curve. The U.S. 10 year note experienced its largest one day spike in yield in three years on Thursday. You with me?

Illustrated for you here, as I have shown you before, is the yield spread between U.S. 3 month T-Bills and U.S. 10 Year Notes. The Thursday spike, good for 12 basis points, is clearly visible. Now, we overlay S&P 500 performance over this spread.

Twins. The correlation is undeniable. When inverted, the spread warns of recession. When expanding? Well, it doesn't take a genius. This condition, especially with the FOMC anchoring the short end of the curve at least through March with their balance sheet expansion program, and perhaps through 2020, automatically creates better fundamentals across many S&P 500 sectors, as well as increased net interest margin. That supports the financials, the banks in particular.

It is important that everyone "gets" this. Increased net interest margin in an expanding economy where ancillary or unforeseen inflation created by increased demand will be depressed by lower up-front outlay (reduced tariffs). This condition could unleash business lending by financial institutions, creating... a viable business (powder keg). Not to mention higher equity valuation. Long the banks? That's probably a darned good thing.

Who else wins in this new environment? Suddenly, the Utilities and the REITs are no longer part of the "in crowd"... now Materials, Industrials, Information Technology (the semis), and Communications Services (5G) might rock. Health Care? meh... still cheap relative to performance, still a political football, still a cash cow, still inelastic demand created by a captive and growing customer base. Still long.

The Cartoon Network is bringing back "Ricochet Rabbit"? No. It appears that a bipartisan spending deal is in the works that will keep the federal government operating through the balance of the fiscal year 2020, which ends in about 10 months. Remember, on top of the USMCA deal, and the constant drumbeat of impeachment (that financial markets lost interest in, if there ever was any, weeks ago), Congress had to worry about running out of money by December 20th.

Not that this agreement, which is still at the committee level is even in writing yet, but I'm saying that there's a chance. A chance that the government is not closed over the holidays. Jingle, jingle.

Just stinkin' drop. I'm on the floor next to you. Now, get some, and don't let me beat you.

Spring Break? No, trading volume. Volume simply exploded both at 11 Wall Street and up at Times Square. Composite volume for constituent companies of the Nasdaq Composite landed 20% above the 50 day SMA for that index. 20%! Algos gone wild? Some humans too.

The shooting star that we saw earlier this week only worked for one day, but how telling was that island last Tuesday? Holy Smokes, was that the buy signal of then month or what? ... and it was plain as day for all to see. By the way, on Thursday, winners beat losers by almost two to one, while advancing volume beat declining volume by more than three to one... at both the New York Stock Exchange as well as the Nasdaq Market Site.

Last night Costco (COST) missed on the revenue side. The shares are off a bit. I did enter early on Thursday afternoon as I wrote I would. There was no special dividend mentioned which was in the back of my head when I thought sales would come in higher than they did. Fortunately, this market does well to camouflage mistakes. The $298 level remains key. My net basis is currently $295.55 for an eighth of a position, leaving plenty of dry powder. Costco, I believe, benefits from an ease in trade tensions. If the market gives me anything in the area of $292/$2923, I'll add twice as much as I bought yesterday.

I also mentioned Adobe (ADBE) earlier in the week, a long-time Sarge fave. This name reported it's fiscal fourth quarter number last night. EPS? beat. Revenue? beat, and +21.5% y/y. Slight miss for subscription revenue, which was made up on the product side. The all important Digital Media unit roared, up 22% to $2.08 billion (More than 2/3 of the business). The firm guides Q1 revenue slightly below consensus, while guiding full year 2020 revenue slightly above. Overnight, the shares have been on fire. 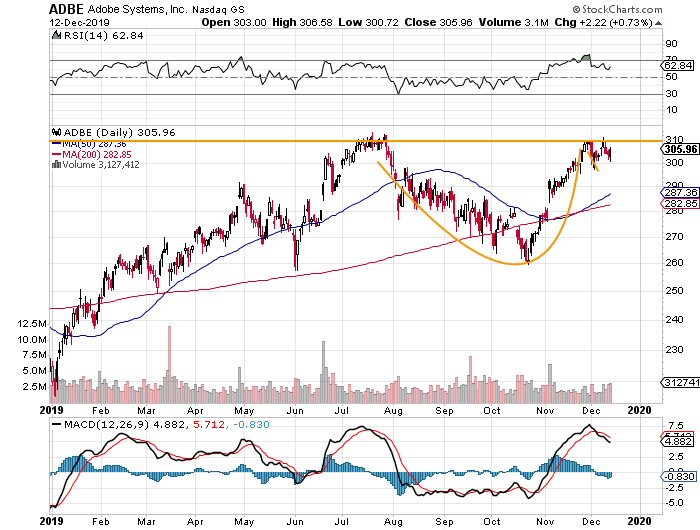 These shares failed at the $310 level earlier this week, which was the pivot created by the visible cup with handle. Overnight the shares are trading at $315 and change. There will be profit taking later in the day. If these shares are to make a run at my target price of $355, we are going to need to see support at that level when tested. Keep in mind that this one has been a huge winner, and that means one must protect oneself. I think I move my panic point up to an even $300 on this surge.

As for recent dip purchase Lululemon (LULU) , those shares have sold off again overnight after rallying on Thursday. I see that many among the analyst community came out in defense of the name on Thursday. With the shares trading in the $221's, and running with a net basis of $221.80 on a quarter of a position, I am not active at this level. Right now, I'm thinking $210 for an add, and $235 for a sale. Anything in between does not interest me at this point.

There are no significant corporate earnings releases scheduled for today.

Get an email alert each time I write an article for Real Money. Click the "+Follow" next to my byline to this article.
TAGS: Earnings | Investing | Markets | Politics | Stocks | Technical Analysis | Trading | China | Canada | Mexico