The date was Thursday, December 12th. The financial world was abuzz, or one might say "all agog" with increased excitement. The "veil of uncertainty" had been lifted. "They" were active. Who "they" are matters not at the moment. They sold Treasuries out on the longer end of the curve and they sold them hard. They bought equities and they bought them with great elan. They bought oil, natural gas, corn, wheat, copper. They did not buy gold. They did not buy the U.S. dollar. Oh, happy day.

Friday told a different tale. Not a complete reversal but honest caution at the top of the chart. A Phase One trade deal between the U.S. and China had apparently been agreed to in principle that simply left out the two items we need to see most... details... and signatures. The bottom line was basically that President Trump would allow the December 15th deadline to pass without escalating the strained condition of trade between the two nations but would reduce exiting tariffs instead.

One thing though, these cuts were smaller than had been bandied about in the media. "They" bought back the long end of the Treasury curve. The spread between yields paid by 3 month U.S. paper and 10 year U.S. paper had spiked a rough 12 basis points on Thursday, just to give about 10 bps back on Friday. Equities ended the day sideways on good volume, for once not quite following the spread that has simply had the S&P 500 on a leash for months on end. The CBOE Put/Call ratio had plummeted onto the 0.70's on Thursday, and then spiked up to 1.10 on Friday. For those less than familiar, these numbers would be compared to 50 day and 200 day simple moving averages that normally reside in the mid 0.90's.

Lower tariffs on Chinese imports are obviously an immediate positive. Seemingly better relations with China, if sustainable, would be a medium term positive. That much is true. The deal in place? Are there issues still under negotiation? It is said that the Chinese side has requested that anything in detail not be made public. If true that would make the deal more easily presentable as a victory for the U.S. side, if not this might mean that the Chinese side has agreed to ratchet up purchases of U.S. goods, perhaps not to a contractually guaranteed level, but more based on market need, with U.S. sellers placed ahead of competitors. That would be a victory of far less magnitude.

There are other positives. Across the pond, whether folks might favor the UK's exit from the EU, or would rather remain, the increased certainty created buy a lopsided electoral outcome has to be considered something that will result in global businesses being able to better make plans around investment. At the same time, progress is finally made on getting the USMCA trade deal ratified across North America after leadership in the U.S. House of Representative inexplicably sat on the deal for more than a year.

Does all of this improved framework with an aim of defining the future of cross-border commerce allow for a new era of clarity? One would think even as some of the data suggests that both the U.S. and China have started to learn how to function around each other, that the result would be improved potential for GDP on both sides of the Pacific.

Now, we know that the Federal Reserve remains quite accommodative. I want you to think on that a bit. The dot plot suggests that the Fed is on the sidelines through 2020. The dot plot is also ridiculous. Only the most foolish would refer to this tool as forward guidance, or even a tool at all. In last week's press conference, Fed Chair Jerome Powell told listeners that there would have to be a run of persistent consumer level inflation prior to the consideration of increasing short term targets for interest rates.

That said, the Fed's balance sheet expansion program targeting only T-Bills with an aim to ease short-term liquidity concerns and not to further stimulate the economy has had an overtly positive impact on equity markets. The Fed has only committed to the program through March. Hence, I only trust the Fed to stay on the sidelines through March. Then a taper tantrum? It might be of interest to note that futures trading in Chicago have not priced in any possibility at all of a rate hike through the end of 2020. My guess is that chances are greater than zero.

This Friday, the Bureau of Economic Analysis will throw down upon us their monthly PCE Price Index, the measure of consumer level inflation conveniently favored by the central bank, as on a year over year basis, it regularly runs well below the more popularly accepted monthly CPI numbers released by the Bureau of Labor Statistics. This divergence between the two monthly releases permits a more patient stance by policy makers. That's a positive for investors. For those in need of medical services or shelter, not so much.

Understand that energy prices have suppressed headline level consumer inflation for as long as short attention spans allow folks in the real economy to remember. The Saudis seem to know what they are trying to do. U.S. rig counts are down significantly. WTI Crude suddenly flirts with the $60 level, which could easily be a gateway to $66/$67. Not a lot of traffic in between.

The consumer is healthy. That much we know, or we think. What we know is that the consumer is working, and that the consumer is being paid more at the median than in many years. We also know that this same consumer is saving more than in many years. That's all good, but a generation that came up at a time where there were no jobs, that saw their parents lose theirs and then come back to work at far lower wage levels is a very careful generation. How will they react when they must pay more for gasoline and heating oil? How will they react when the long end of the Treasury curve that is now trading at the whim of the free market starts to make room for yes, growth and inflation, but higher mortgage rates as well.

Don't worry, reaching a Phase One agreement with China was so easy, Phase Two, with all the difficulty to agree on items, should be a snap.

Believe it of not, I am positive on earnings going forward, as it is my belief that conditions now set by an improved backdrop for trade, not just with China, but globally will now allow the U.S. industrial sector to bottom. The resurrection of this particular slice of Americana, as well as an improved trade balance with the nation on this planet with the most mouths to feed, has great potential to improve conditions for the American middle class. Globalization, or at least an imbalanced version of globalization had hallowed out the U.S. middle. Not out of the woods by any stretch. Perhaps, though, back in the mix, and every long journey starts with a single step.

I guess my point is that the journey will continue to be a walk through danger. Nothing is assured. Ever. The unveiling of certain layers of uncertainty reveals... different uncertainties. Increased margins will improve corporate execution. Will that matter for stocks? One might think. Then again, the year 2019 has been simply wonderful for the equity crowd, despite three consecutive quarters (going on four) of earnings contraction, a reversal of sorts from the prior year. As long as we understand, and as long as we can identify, we then adapt in order to overcome. It's what we do. No one amongst us is ever defeated until we admit defeat. No one else can take your fighting spirit, but you can give it away. It may then never come back. Be invincible. It's up to you.

All We Are, We Are

We Are All, All We Need

Sarge Names On The Move 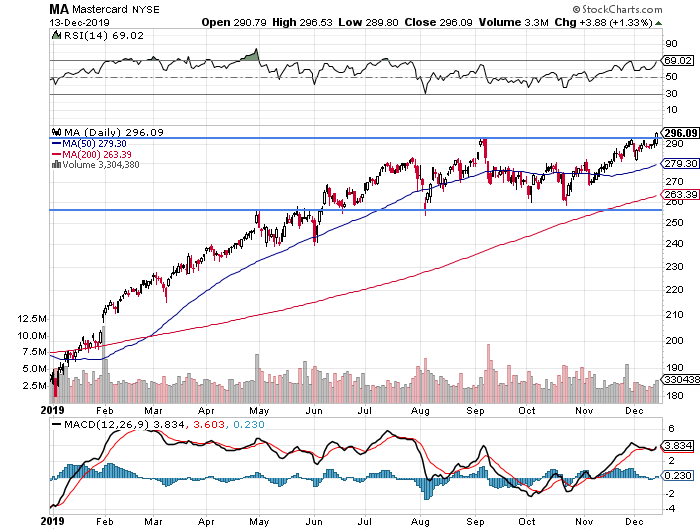 Readers will note that Mastercard (MA) finally took and held (at least for now) the pivot at $294. Once we see support at that level, then I think I trust that the shares have broken out of a basing pattern in place since September. Target Price: $340 (reiteration), Panic Point: $279 (up from $265). 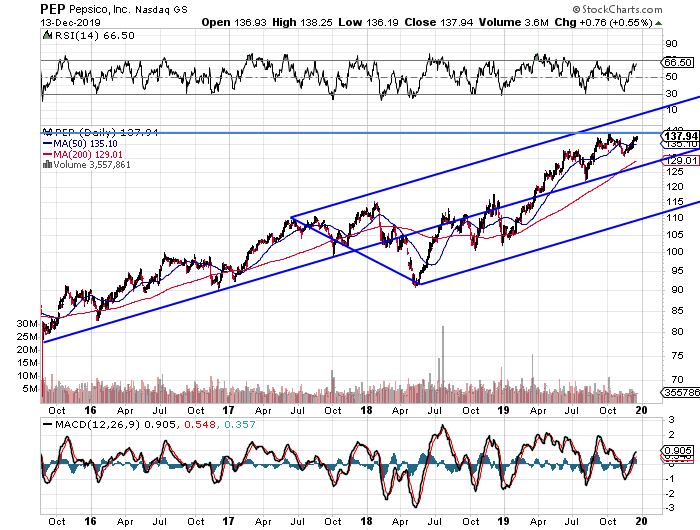 Pepsico (PEP) continues to recover from the October/November beat-down. Shares closed just below $138 on Friday, finally bringing the pivot at $140 into view. Now that these shares have largely obeyed the Pitchfork for more than two years now, and have made us of the central trendline as support for most of 2019, as that line had been resistance for all of 2018 and then some. A successful taking of $140 in my opinion sets up prices potentially as high as $165. We get $140, and I'll establish panic at $129 (the 200 day SMA). 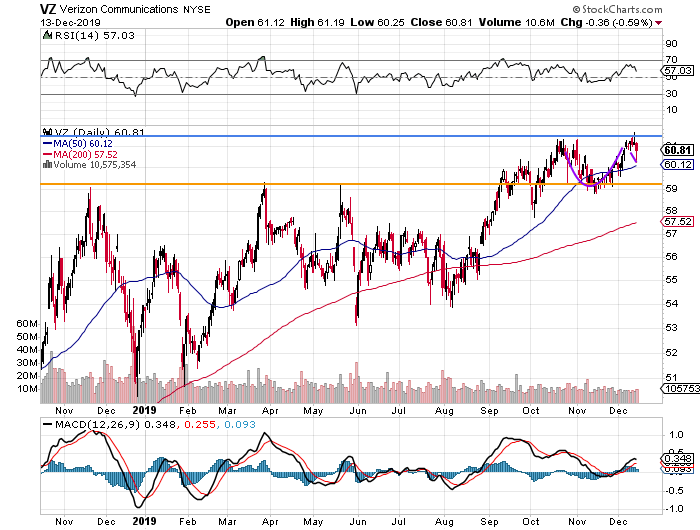 Talk about painting by numbers? Keep in mind that this is not a volatile name, so the moves are not gigantic, but Verizon (VZ) does pay investors 4% to hang around. In September, Verizon took long-term resistance and turned it into support. A new line of resistance then formed just above the $61 level. You see what I see? Mid-October through late November forms a cup, and then a selloff. The 50 day SMA (currently at $60) potentially forms a line of support that could turn this selloff into a handle for the cup. Target: $70 (up form $64), Panic: $57 (up from $54).

(Mastercard and PepsiCo are holdings in Jim Cramer's Action Alerts PLUS member club. Want to be alerted before Jim Cramer buys or sells these stocks? Learn more now.)

Get an email alert each time I write an article for Real Money. Click the "+Follow" next to my byline to this article.
TAGS: Earnings | Federal Reserve | Interest Rates | Investing | Markets | Stocks | Technical Analysis | Trading | China