Was that just what the doctor ordered for US financial markets? Was that face-ripping rally on a Monday, on the first day of a new month and a new quarter the turning point? Was that "the" bottom, a "tradable" bottom, or just another bear market rally that burns out as soon as the algos have run out of "momentum juice", also known as shorts needing to cover?

Let's consider the possibilities, and then I'll tell you what I think. For one, US debt and equity markets, and some dollar-based global commodities came in oversold. The US dollar came in overbought. That's a pretty good recipe for a face-ripper.

The news out of the UK, that the government there would not try to force the issue on unfunded tax cuts helped early on Monday by reducing the risk of imminent crisis in a G-7 nation involving a crucial global reserve currency. That supported British sovereign debt and put a bid under both the British Pound as well as the Euro versus the US dollar.

As the US dollar finally relaxed a bit, talk of a sizable OPEC+ production cut this Wednesday ratcheted up. These developments were welcomed with open arms by US debt, equity and commodities traders.

In addition, here in the US, the ISM Manufacturing report, which is the most broadly focused upon manufacturing based purchasing managers survey in this country, disappointed alongside August Construction Spending for August, which also disappointed. Construction spending in the US contracted for a third consecutive month in August and if one goes back to May, even that month's gain was minimal, so it's really four straight months of underperformance for that slice of the US economy. That's one third of a year, which is enough to leave a scar.

As for the September ISM Manufacturing Survey, the results come dangerously close to foretelling that a recession that many of us already felt that we were already in, and others refuse to see coming. The headline print of 50.9 fell short of expectations, but still printed in expansionary territory. However, a number of key components did not. The most important component in any manufacturing survey is New Orders, and New Orders in September swung to a decisively contractionary reading of 47.1, all the way from 51.3 in August.

A move like this in one month has to be seen as quite alarming. Manufacturing based employment made a similar move dropping all the way from a quite comfortable 54.2 in August all the way into contraction in September at 48.7. New Export Orders printed in contraction for a second consecutive month, probably a casualty of dollar strength, as backlogged orders wound down to something barely expansionary (50.9) as businesses had less new orders to work on.

Much of this is contractionary for the economy broadly and disinflationary, not truly deflationary just yet as the pace of pricing growth slowed to 51.7, but remained north of 50. This was the 28th consecutive month for increasing prices in this survey. That said, the price of shipping a container across the Pacific Ocean has dropped from $15K to 18K at the height of the supply chain gridlock to less than $3K (-82% y/y) today to the West Coast and less than $7K to the East Coast (-63% y/y), so that labyrinth is very close to being completely unscrewed.

That Monday morning data coupled with already gathered generally negative domestic macroeconomic performance has become rather obvious supportive evidence, and on a global scale that the Fed has moved too far and too quickly, almost solely placing the onus of creating a tighter monetary environment upon the sledge-hammer like manipulation of short-term interest rates.

The Fed is woefully behind on their quantitative tightening program for those who do not follow such things. Readers may recall that using short-term rates as the primary tool and the balance sheet secondarily is the exact opposite of how I advised the Fed to go about this.

New York Fed Pres. John Williams, who has never been confused with a bolt of lightning, spoke on Monday. Williams said, "Tighter monetary policy has begun to cool demand and reduce inflationary pressures, but our job is not done."

Hmm, maybe that means we should allow Main Street, USA to catch up a little so we have a better idea of how much damage we've done? Williams goes on... "Unfortunately, that's it for the good news on inflation. The fact is, lower commodity prices and receding supply chain issues will not be enough by themselves to bring inflation back to our 2% objective."

The truth, my friends... is that five year break-even rates are close to 2%. There is absolutely no entrenching of increased expectations for inflation going on. Any mention of acting in order to prevent such entrenchment is simply an excuse to enforce tighter monetary policy.

How is the economy going to perform moving forward? Williams said, "I expect real GDP to be close to flat this year and to grow modestly in 2023. As a result of slowing growth, I anticipate the unemployment rate will rise from its current level of 3.7% to around 4.5% by the end of 2023."

Using the rough math provided by fellow Real Money contributor Peter Tchir in his weekend piece, who relied on BLS data himself, each percentage point (this constantly changes) in the unemployment rate is currently worth about 1.58M jobs. So, Williams is casually talking about putting 1.264M of you out of work. Let that sink in. Oh, and if he's underestimating the end unemployment that he and his kind bring forth... well, you can do the math.

Ed Yardeni, who is someone I always unmute the television for while I am working, also spoke on Monday. Yardeni, who famously coined the term "bond vigilantes" back in the day, on Bloomberg TV, said, "I'm totally stumped, mystified, surprised that Fed officials do not seem to acknowledge that just focusing on the Fed funds rate, which is part of the monetary tightening cycle, is a mistake. When you also have QT2 (quantitative tightening) and a soaring dollar, there are very restrictive monetary developments. I think one more rate hike coming in November and that will be it, because the financial stability issue will pop up as a primary concern."

Obviously, US financial market participants saw the data, and respected the sentient take of someone as thoughtful and as closely followed as Ed Yardeni. US debt and equity markets were off to the races. In addition, the Reserve Bank of Australia increased their benchmark rate by 25 basis points on Tuesday morning, when a 50 bps hike had been expected. Yields fell further and US equity index futures traded higher in response.

So, back to our question. Was that "the" bottom, a "tradable" bottom, or just another bear market rally that burns out as soon as the algos have run out of "momentum juice", also known as shorts needing to cover? On Monday, the yield for the US Ten Year Note dropped from 3.8% to 3.66%. This morning it trades at 3.58%. On Monday, US Two Year paper went out paying 4.12%, down from 4.21%. This morning we see the Two Year yielding 4.01%. Front month WTI Crude futures are trading at $84 a barrel early on Tuesday morning, up from about $79 on Sunday night.

We move to equities. Despite the exclusion of Tesla (TSLA) due to their miss on deliveries, and the gap between deliveries and production announced over the weekend, equities roared. The Philadelphia Semiconductor Index popped for 3.76%, as equipment providers such as Lam Research (LRCX) and Applied Materials (AMAT) led large caps in that space. The Dow Transports ran 3.37%, led by Kirby Corp (KEX) and Matson Inc (MATX) , both involved in maritime shipping, followed by the rails. This is oil/commodities based as the dollar strength abated just a bit.

The S&P 500 gained 2.59%, the Nasdaq Composite gained 2.27%, and the Russell 2000 gained 2.65%. None of those indexes even came close to retaking any of my three key moving averages. (The 21 day EMA is the closest to being somewhat reachable.) All 11 SPDR sector-select ETFs closed in the green on Monday. Energy (XLE) easily led the way, up 5.65%. Ten of the 11 closed up at least 1.72% for the session. Only Discretionaries (XLY) struggled as autos struggled, thanks to Tesla.

However, trading volume across the S&P 500 exceeded its own 50 day trading volume SMA by 14%, and while down significantly from Friday (end of quarter volume), was indeed elevated from trading volume for the three "down" days prior to that.

Take a look at these two charts. You have seen them often as I have been trying to drive them home... 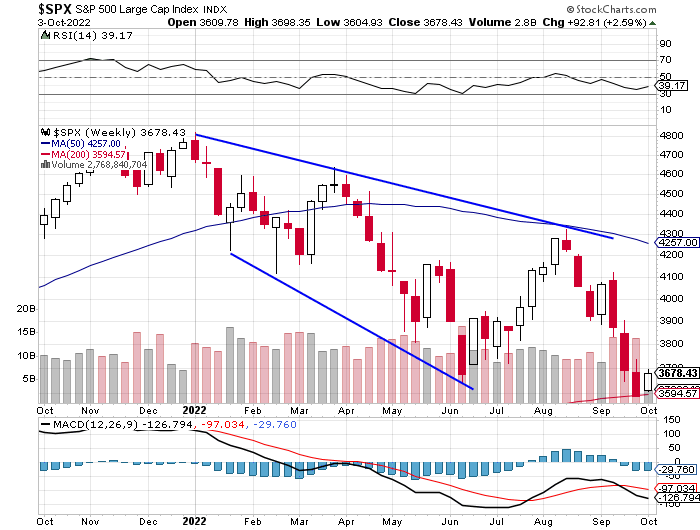 This, again is what is known as a descending broadening wedge. This is considered to be a bullish pattern of reversal. For validation, between two and five touches are required on both trend lines. We now have that. 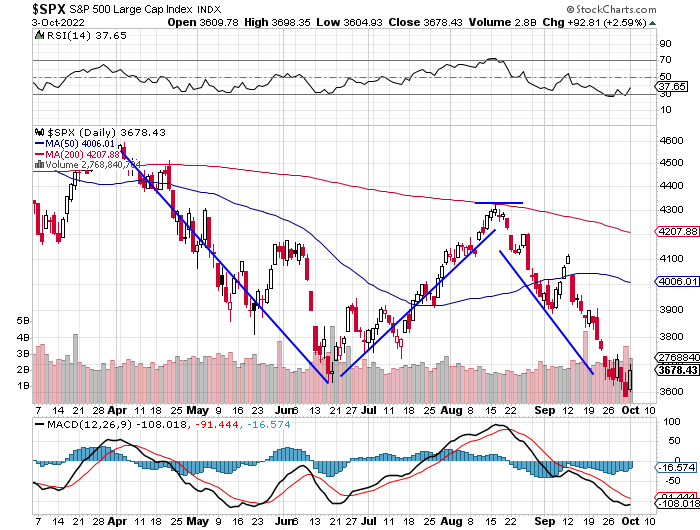 With everything working against the markets right now, from the global and domestic economies to the Fed and their rising interest rates, imbalanced currency valuations and reverse wealth effect to heightened geo-political risk, sentiment has been poor. All as the S&P 500, after receiving the above validation, sets up to move into a potential "double bottom" reversal.

This does not necessarily mean that this is the bottom, but if we get another rally just like Monday's, only on increased trading volume this week or early next week, then we have a ballgame. (A ballgame is a tradeable bottom, not "the" bottom). That would signal at least a temporary change in trend.

What I am doing is wading back into a higher level of exposure. Wading. Gently. I am still overweight cash. That said, I have been adding to all of my defense contractors. I am sure you have noticed the avalanche of contracts awarded in recent sessions, especially to Lockheed Martin (LMT.) I have also added to Eli Lilly (LLY) , and initiated TJX (TJX) in addition to Monday's Tesla purchase which you know about if you read me here or watch me on Fox Business with Liz Claman.

Get an email alert each time I write an article for Real Money. Click the "+Follow" next to my byline to this article.
TAGS: Economic Data | Economy | Federal Reserve | Investing | Markets | Stocks | Technical Analysis | Trading | Defense