For his third "Executive Decision" segment of Mad Money Wednesday night, Jim Cramer checked in with Ynon Kreiz, chairman and CEO of toymaker Mattel (MAT) , which announced a wider-than-expected 56-cents-a-share earnings miss. The company has been plagued by supply disruptions, retail closures, and now delays in movie releases.

Kreiz explained that Mattel started the year with strong sales, but saw sharp declines beginning in March. The company saw some improvements in April. Kreiz added that online sales continue to grow strongly.

Mattel still has strong brands, Kreiz added, and his company has been able to gain market share in gaming.

As for Mattel's charts, let's check them out.

In this daily candlestick chart of MAT, below, we can see that prices have struggled the past year. MAT declined sharply in February and March, and has only a limited recovery since late March. I can see a couple lower shadows in March as traders rejected the extreme lows and another lower shadow Wednesday, but overall the chart is not that robust.

The trading volume is light/dull and the On-Balance-Volume (OBV) is at a new low for the move down. Traders and investors are not being aggressive buyers at these lower levels.

The Moving Average Convergence Divergence (MACD) oscillator gave a cover shorts buy signal in late March but it is still below the zero line telling us that there is not much strength in the trend.

In this weekly candlestick chart of MAT, below, we see that prices have struggled for the past three years. There have been some bounces along the way but no sustained uptrend. Prices are below the declining 40-week moving average line.

The weekly OBV line is bearish and close to a new low for the move down, while the MACD oscillator is in a sell mode below the zero line.

In this daily Point and Figure chart of MAT, below, we can see a potential downside price target in the $7.50 area. It is not a big decline but it still says that distribution (selling) is still the order of the day. 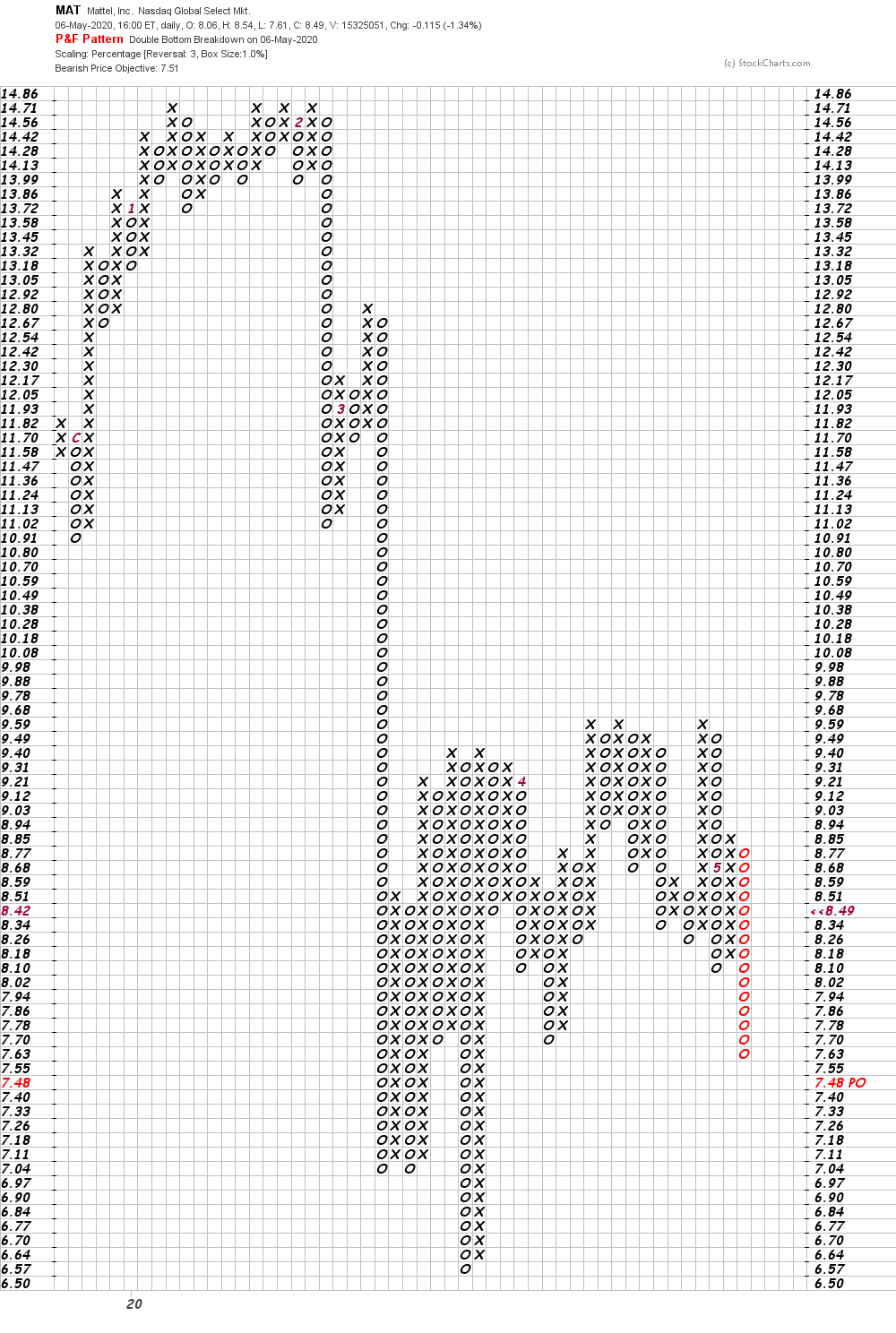 Bottom line strategy: While the fundamental story may be slowly improving, the charts and indicators of MAT are still bearish and not ready for a sustained upside move. Avoid the long side for now.

Get an email alert each time I write an article for Real Money. Click the "+Follow" next to my byline to this article.
TAGS: Earnings | Economy | Investing | Stocks | Technical Analysis | Trading | Movies | Gaming | Mad Money | Executive Interview