During Friday's Mad Money program, Jim Cramer told viewers about a number of stocks that would be reporting their latest quarterly earnings figures this week. On Tuesday we'll hear from AutoZone (AZO) , Intuit (INTU) and Toll Brothers (TOL) . Cramer was bullish on all three, but noted that Toll Brothers needs to be perfect to head higher.

Let's check on the charts of Toll Brothers before they report their latest earnings after the close of trading Tuesday.
In this daily bar chart of TOL, below, we can see that prices have resumed their advance after our last review on February 22 when we wrote that "Toll Brothers is scheduled to report earnings on Tuesday and if traders are disappointed or worried about a rise in mortgage rates we could see TOL decline in price. I suspect a pullback or correction to be relatively shallow but stay on your toes."
Prices resumed the advance in March and April but we can see a pullback in May. TOL is testing the rising 50-day moving average line but is well above the rising 200-day line which intersects just above $50.
The On-Balance-Volume (OBV) line shows a rise into April and a little softness in May telling us that traders have been more aggressive sellers ahead of earnings tomorrow.
The Moving Average Convergence Divergence (MACD) oscillator is pointed down to the zero line and could soon cross below it for an outright sell signal.

In this weekly Japanese candlestick chart of TOL, below, we can see some weakness. In early May the chart shows a bearish engulfing pattern where the second week's real body wraps around the real body of the prior week. This is a reversal pattern and that can mean that prices trend sideways or lower.
The slope of the 40-week moving average line is positive. The weekly OBV line is positive and the MACD oscillator is narrowing towards a possible downside crossover and take profits sell signal.

In this daily Point and Figure chart of TOL, below, we can see a potential downside price target in the $54 area. A trade at $62.25 would probably improve the picture. 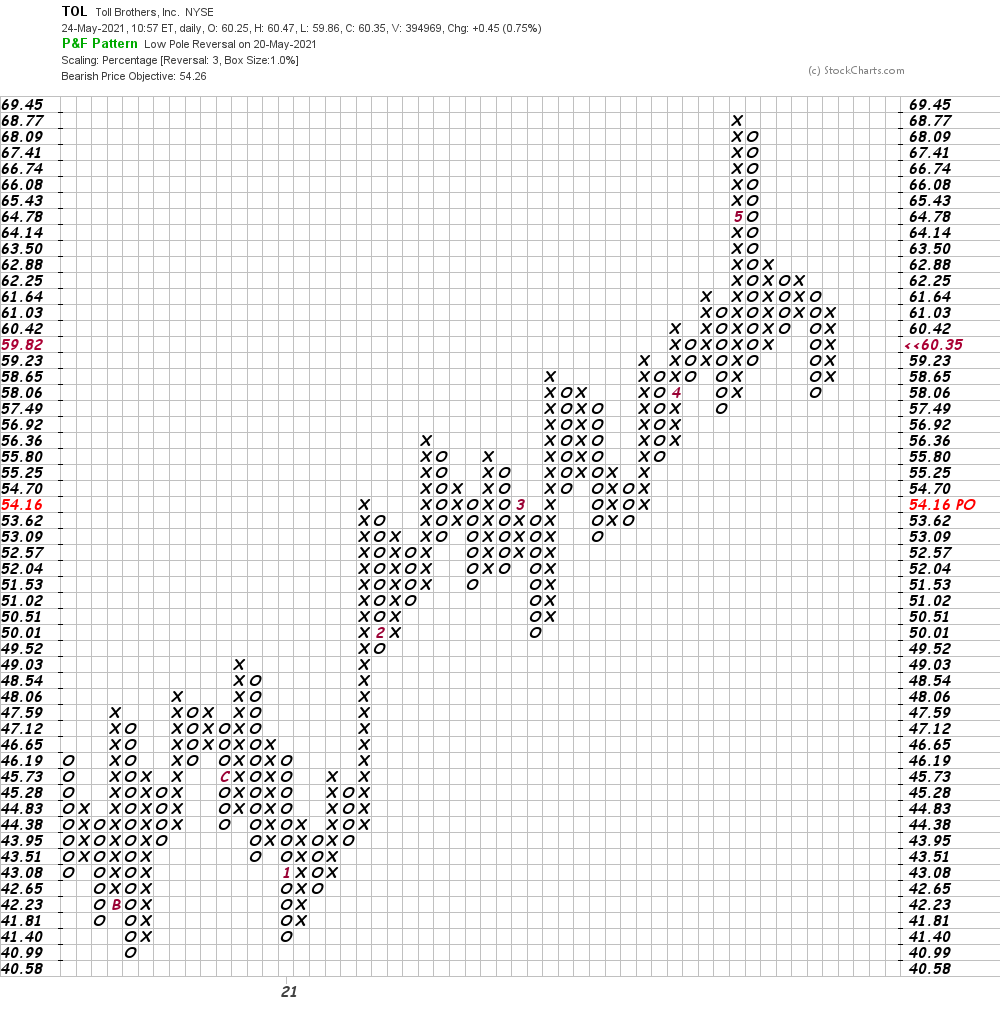 In this weekly Point and Figure chart of TOL, below, we can see a potential price target in the $79 area.

Bottom line strategy: There's plenty of information on the booming housing market so traders may have high expectations for homebuilders like TOL. TOL has probably been increasing their selling prices with the rally in lumber prices but I have no idea if that has helped or hurt their bottom line.
I have no special knowledge of their upcoming numbers but the charts of TOL suggest we could see $79 per share later in 2021.
Get an email alert each time I write an article for Real Money. Click the "+Follow" next to my byline to this article.
TAGS: Investing | Stocks | Technical Analysis | Trading | Housing Market | Construction & Engineering | Mad Money | Earnings Preview