If one is in AT&T (T) , they are there for the dividend. For years, there has not been much else to attract investors due to a number of almost incredible blunders made along the way as the firm tried to evolve into something it was not. The shares bottomed earlier in October as the firm works to unwind that multi-year journey into the world of entertainment, and refocuses on being what it should be... a major player in telecom. This is the story of a major corporation as it comes to a point of inflection.

First, AT&T reported the firm's third quarter financial performance on Thursday morning. The firm posted adjusted EPS of $0.87, and GAAP EPS of $0.82. By both metrics, earnings comfortably beat Wall Street. The adjusted number was good for earnings growth of 14.4%. AT&T generated revenue of $39.9 billion over the three month reporting period. That missed consensus view by a smidge, and shows as a year over year contraction of 5.7%, reflecting the separation of DirecTV.

The investment and refocusing on the core business appears to be paying off. AT&T added 1.22 million wireless customers over the quarter. Postpaid phone adds amounted to 928K of those, while rival Verizon VZ added just 429K postpaid phones for the same period. AT&T also added 249K prepaid phones. Postpaid churn landed at 0.72% for the quarter up from 0.69% a year earlier. The firm noted that adjusted for the pandemic era "Keep America Connected" program, that churn actually improved year over year.

Back in May, as the firm continued its refocusing on the core business, AT&T announced that it would spin off the WarnerMedia entertainment unit in a $43 billion deal with Discovery (DISCA) . The deal is expected to close sometime in mid-2022. The crown jewel of WarnerMedia is currently the HBO channel and HBO Max streaming service. Total subscriptions for the HBOs increased by 1.9 million globally to 69.4 million, and is on track to hit the target of 70 million to 73 million by year's end. Interestingly, U.S. subscriptions dropped from 47 million to 45.2 million throughout the quarter as HBO was removed from Amazon (AMZN) Prime Video in September.

The firm will pay out a $0.52 dividend on November 1st to shareholders of record this past October 11th. Though the payout will likely now be variable, that's still a yield of 8%. Even if eventually halved, AT&T will still be a dividend stock. Just understand that the firm has stated an intention to return less free cash flow funds to shareholders and instead pay down some debt with the balance. This will be a negative event for the stock if and when the day comes that AT&T announces a reduced dividend. That will also be a good day for the health of the company, and its ability to better sustain that dividend. 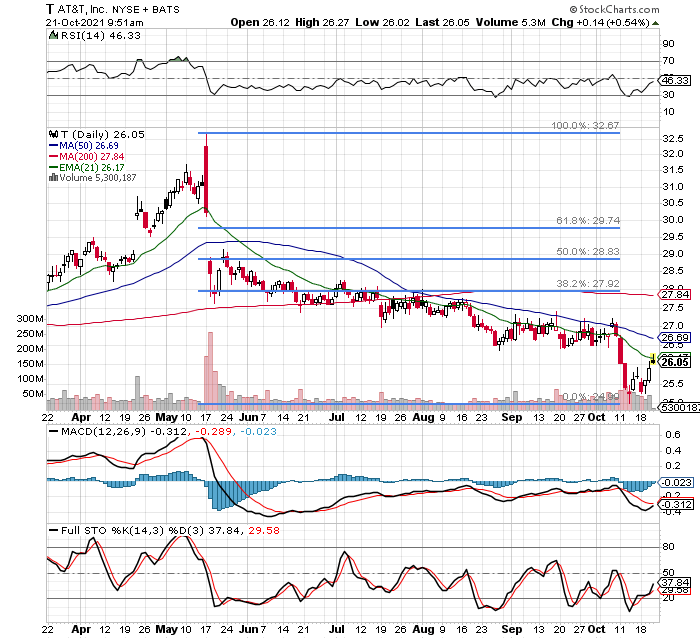 Traders can move on to something else. This is a decision to either invest or not invest. Readers don't have to worry about these shares becoming overbought on this morning's pop. The shares have hit some traffic at the 21 day EMA ($26.17), and if taken would hit the 50 day SMA at $26.69, so there will be technical resistance.

You see the 200 day SMA? Just getting there will require a 38.2% Fibonacci retracement of the 2021 selloff top to bottom. What I see is that unfilled gap on huge trading volume from back in May. Think it can fill? It might. AT&T is definitely a different company than it was, and will continue to evolve into mid-2022. AT&T also seems to be beating Verizon at the game they both play. I see nothing wrong with an entry trade of 1/8 (12.5%) of intended full position size, as long as something is sold against it in order to soften net basis, preferably out into the middle of next year.

Note: Profit is capped at $27 (8.4%) through the middle of next year. Think 8.4% is pedestrian? Haven't been in AT&T for a while have you? This is the first step in building a long position, not a trade.

Get an email alert each time I write an article for Real Money. Click the "+Follow" next to my byline to this article.
TAGS: Earnings | Investing | Stocks | Technical Analysis | Trading | Telecommunications