The bad news for me might be that I maintain a small sub-portfolio of exploration and production names on my books for the dividend. I more or less treat the group that currently trades well below what traditional metrics for valuation might suggest. I (really, really) like the huge dividend payments that are supported by even huger cash flow. This industry, in all honesty, has not performed well but I will be quick to point out that there are two ways to make money on long positions. One would be share price appreciation over time. The other, the methodical erosion of net basis though appropriate sales made in related options. (puts: risky, calls: not as much).

The good news would be that I exited Exxon Mobil (XOM) as I swapped those shares out for Chevron (CVX) , a stock that has also sold-off, but to a lesser degree. Is it time to take another look at Exxon Mobil? The firm has been all over the news of late. First, the firm agrees to sell it's Norwegian assets to Var Energi for a cool $4.5 billion. Then the firm was included in a piece published in Barron's over the weekend that highlighted research by analysts at Morgan Stanley suggesting several energy sector mergers or acquisitions. (FYI: In that research, Pioneer Natural Resources (PXD) and Diamondback Energy (FANG) were offered up as potential targets for Exxon Mobil.) Finally on Monday, Exxon Mobil was included among the many in registering for November drilling rights off the coast of Brazil. Except, "finally" was a poor choice of verbiage. There was more.

I remember air raid sirens. Perhaps those of you who reside in locales that rely upon volunteer fire departments do as well. I grew up in Queens, NY. Way back, when I was in the early grades of elementary school, if the sirens went off during the school day, Sister Janine (I'm Irish Catholic. Wanna go?) would hustle us into the hallway in between classrooms, and we would have to sit on the floor with our heads between our knees to protect our heads, and our hands over the back of our necks in order to protect our medulla oblongatas. The Russians probably were not on their way, but if they were, no way they were getting my medulla oblongata. The siren in the back of my head went off again early on Wednesday morning when I saw the news. This time it was Exxon Mobil.

On Tuesday evening, Exxon Mobil filed a warning ahead of releasing the firm's third quarter financial results this October 31st. The firm now says that largely due to lower energy prices, overall income for this third quarter would likely print close to $3.1 billion, which would be -50% y/y. Segregated, Oil and Gas Production will experience a 45% decline, while downstream profits can now be expected to provide just $500 million to to the total (-70%).

If you're looking for professional opinion on XOM, you may be disappointed. Though, I can find 29 analysts who have rated this stock, 22 of those are holds, and there has been a real dearth of public opinion from any highly rated analysts at all for many months. Merrill Lynch basic materials analyst Doug Leggate did maintain a "Buy" on the name last week, while setting a $100 price target, but I am not extremely familiar with Leggate's work. At least not yet. 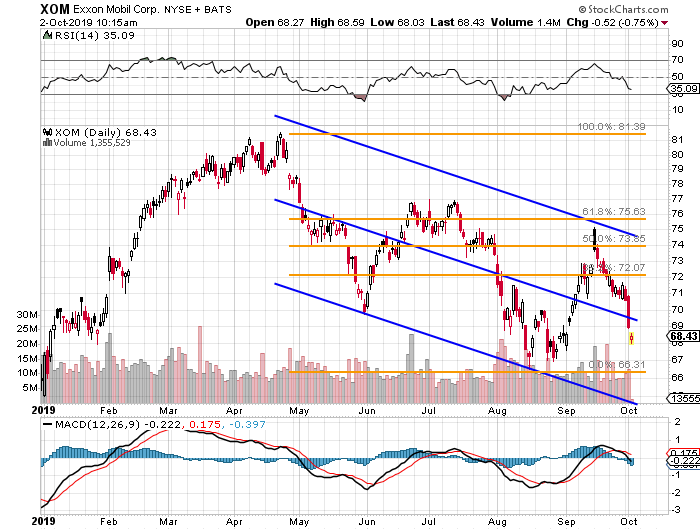 Very troubling chart since the shares peaked for the year in April. Obviously, this is a growth name, and trade wars hurt growth, not to mention monetary policy that remained inappropriate for the environment for much of the year. Relative strength is back toward the bottom. The daily MACD is telling investors to hold their fire. The shares are so far below their 50 and 200 day SMAs that I just took them off of a crowded chart.

The purple lines are placed as to illustrate the consistency of lower highs coupled with lower lows. That condition has persisted for almost six months now. The orange lines point out Exxon's obedience to Fibonacci retracement levels, technically. The September high is nearly a perfect 61.8% above the April through August low.

Now, see the double bottom in August at 67? As a reversal pattern, that worked like a charm. That spot also presents as the greatest danger to this name right now.

Do I grab a few shares on this weakness? I have plenty of dry powder. That's for sure. I came into this week very well positioned for some volatility. I do like the dividend yield that at an annual rate of $3.48 now approached 5.1%. There are two other things that bug me right now.

1) The sale of the assets in Norway had my hopes up for either an increased dividend or the initiation of a share repurchase program. Obviously, with the shortfalls now expected in profits, I think this becomes less of a sure thing. Much less.

2) Presidential candidate Elizabeth Warren, who appears to be juggernaut at the moment, proposed an aggressive plan to tax heavily those corporations or trade associations that spend heavily themselves on lobbying the federal government. That tax, under her plan starts at 35% on lobbying based expenditures and scales up to 75%, as such spending also scales higher. This is not a political statement. Just an observation that such a plan would impact negatively a firm such as Exxon Mobil.

For the short-term, I think I watch that 67 level. Longer-term, I watch Elizabeth Warren in the polls.

Get an email alert each time I write an article for Real Money. Click the "+Follow" next to my byline to this article.
TAGS: Dividends | Investing | Oil | Stocks | Technical Analysis | Trading |