It might be time to take a little gamble on GMBL. By (GMBL) , I'm talking about Esports Entertainment Group. The company announced this morning that the state of New Jersey Division of Gaming Enforcement has formally accepted the company's application for a gaming license. There's still more to the process, but management anticipates it will be able to accept live bets by the end of its fiscal first quarter. For reference, its fiscal fourth quarter ends June 30, 2021, so we're looking at September 2021.

The company is also making a smart decision partnering with Liquidpedia.net. This will allow the company to create another outlet for potential players to reach their platform. Liquipedia is the Wikipedia of eSports.

Additionally, in March they acquired Lucky Dino which is an online casino with a Malta license. The company generated $21 million and $3.8 million last year. That's a huge plus for a company . Between this latest acquisition along with previous acquisitions, GMBL anticipates revenue of $70 million in 2020. Through multiple acquisitions, the company has taken major strides toward creating a vertically integrated eSports ecosystem and betting focus.

Three NFL teams have signed deals making eSports Entertainment Group their esports tournament provider. The Baltimore Ravens, Denver Broncos, and Philadelphia Eagles have already agreed to terms with at least one taking a stake in GMBL as part of the agreement. We anticipate more teams will follow suit as we near the kickoff of the 2021-2022 NFL season. They also agreed to terms with the LA Kings, LA Galaxy, and Philadelphia Union. 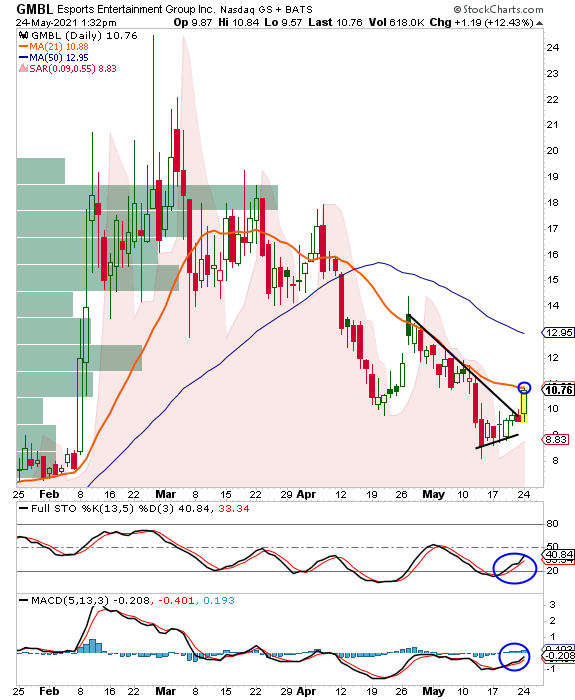 The price action has finally turned to the upside after months of lagging. With the bulls pressing the 21-day simple moving average (SMA), I think we're heading to the 50-day SMA just below $13 within the next few weeks. There's a chance we're rejected at these levels today and pushed back toward $10 but I like the strengthening indicators in both momentum and trend. As sports return, the economy heats up, and people begin to return to normal, I believe we'll see a continued increase in gaming. With their pro partnerships, GMBL can certainly benefit from both the stay-at-home gamblers as well as the return of sports.

I'm a buyer of the stock at these level with the willingness to add in the $9 to $10 range. I will consider taking some small profits around $13, but I'm shorting for $15 to $16 this week before taking off a second tranche.

Get an email alert each time I write an article for Real Money. Click the "+Follow" next to my byline to this article.
TAGS: Investing | Stocks | Technical Analysis | Trading | Gaming | eSports

What Jerome Powell Did and Did Not Say

The market had a strange reaction to the initial headlines out of the Fed, and even now it's unclear how long the liquidity taps will remain open.

Jim Cramer said the 3D market is owned by Unity.