So, Microsoft (MSFT) is not going to end up buying the U.S. assets of the TikTok app from ByteDance. We learned over the weekend that Oracle (ORCL) had "won" that battle, but that it increasingly looks like we don't know exactly what it is that Oracle has won. Ownership may not exactly be the prize here. As most readers know, Microsoft is a long-time Sarge fave. I was delighted when I thought that the firm had a shot at acquiring TikTok's U.S. (and more) assets as apparently was most of Wall Street. The stock ran on that rumor, and has sold off as the rumor turned out to be just that. Quietly though, this week, Microsoft has been either making news, or at least in and around a number of news events, without gathering much attention. I find some of this interesting.

Why Are We Here?

We, no wait... I will say "I", not assume that you are in this trade with me. I was in Microsoft well before the TikTok news, probably before I ever heard of "TikTok". Why? Not a tough question. First, I think CEO Satya Nadella is one of the smartest people that I have ever heard speak. Then there's the firm's position in the now dominant cloud/software industry. The firm is a leader in what is known as the hybrid cloud, and corporate clients are choosing "Azure" because the firm simply uses the same stack as is used in the public cloud. This allows for flexibility in data storage, on premise, or off.

Beyond that, the firm has driven it's ongoing relationship with clients from a purchase and licensing model to one that provides recurring revenue through subscription. This goes for the wildly growing gaming business. This goes for legacy office software. This goes for LinkedIn, and this goes for newer products as well. On that note, I still expect "Teams" to compete better against Zoom Video (ZM) than it has. In addition, lost in the news cycle amid the global pandemic, has been the firm's commitment not only to green energy, but actual carbon removal from the environment.

This week we learned that industry-wide video game sales grew 37% year over year in August. That's an acceleration from July's 32% and June's 26% after the incredible gains made in April and May. Yes, people locked down will play video games. Sales of accessories for video games by the way, increased 42% in August. The top selling accessory of the year is the Xbox (Microsoft) Elite Series 2 Wireless Controller.

This comes after Microsoft had announced last week that for this holiday season the firm will release the higher end Xbox Series X at $499, and the Xbox Series S at $299. The next generation consoles will launch on November 10th (Semper Fi), and monthly financing options will be offered to consumers. I bring this up because on Monday, chief rival Sony (SNE) reduced the firm's production outlook for it's next generation console the PlayStation 5 by four million units to just 11 million. The issue is with the custom designed chip for the unit. Sony also expects to launch a high end model at $499, and a slimmed down version probably at less than $400. This news could benefit Microsoft both on availability and in pricing.

Seemingly out of left field. Microsoft and former Sarge fave that did not work out so well, BP PLC (BP)  , appear to have agreed to work together as partners to further the digital transformation in energy systems as well as advance the well known net zero carbon goals of both corporations. BP will continue to rely upon Microsoft's Azure as the firm's cloud-based infrastructure provider. In return BP will be permitted access to Microsoft's portfolio of services to get itself better positioned for a greener future. The firms have signed a framework agreement to work together towards this mutual end across much of the globe. 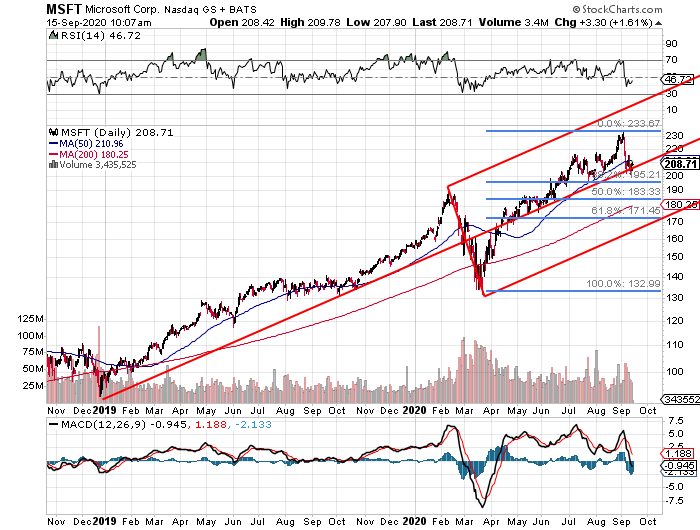 Interestingly, where the deep selloff last spring provided for so many names, a cup with handle pattern, for Microsoft, I see the crosshairs of a Pitchfork model that defines a trend going back to the much milder selloff of late 2018. So, when asked if I should have sold MSFT up in the $230's a couple of weeks ago, I'll say of course I should have. I am a trader, and that was the high. If asked if I should sell the shares now? I don't think so.

These shares have found support at the central trend line of that Pitchfork since April and has held on at least 10 significant tests of that rising line. Even if it does crack, there is Fibonacci support at $195. I see these shares trading at $250, probably after the election is decided. Notice, I did not say after the election, I said after it was decided. We may see some mayhem in between now and then. That, however, is my target price. Dan Ives of Wedbush put a $260 price target on the shares last Friday, so I am in some pretty good company. Where do I panic? I was thinking $183, but I have a lot to protect here. I am now thinking I would allow a test of $195, but not add there, instead prepared to act upon failure. A trader long at least 100 shares of equity might want to look at the October 30th (right before the election) $225 calls for a sale. These calls are currently priced around $4.

Get an email alert each time I write an article for Real Money. Click the "+Follow" next to my byline to this article.
TAGS: Investing | Markets | Stocks | Technical Analysis | Trading | Software & Services | Technology | Advertising