Let's check the charts and indicators for The Wendy's Co. (WEN) . Earnings are not expected until later this month but the power of the uptrend appears to be waning.

In this daily bar chart of WEN, below, we can see that prices have worked higher from early August but some bearish divergences have materialized. Prices are trading slightly above the rising 50-day moving average after plenty of tests of the line since early January. The slower-to-react 200-day moving average line is rising and intersects just below $20.50.
The daily On-Balance-Volume (OBV) turned higher with prices in early August but it has turned flat to lower since early this year and has diverged from the price action.
The 12-day price momentum study in the lower panel shows lower highs from the middle of August when prices have been making higher highs - this is a bearish divergence and tells us that the pace of the uptrend has been slowing for months. This bearish divergence is probably foreshadowing a turn lower for WEN.

In this weekly bar chart of WEN, below, we see a mixed picture. Prices are in an uptrend and above the rising 40-week moving average line.
The weekly OBV line has been rising from late July but it has not made a new high along with the price action.
The Moving Average Convergence Divergence (MACD) oscillator has been "rolling over" for several months and tells us that the strength of the uptrend has been weakening.

In this daily Point and Figure chart of WEN, below, we can see that prices are in an uptrend with a potential upside price target around $24 but a break of $21.25 will likely weaken this chart. 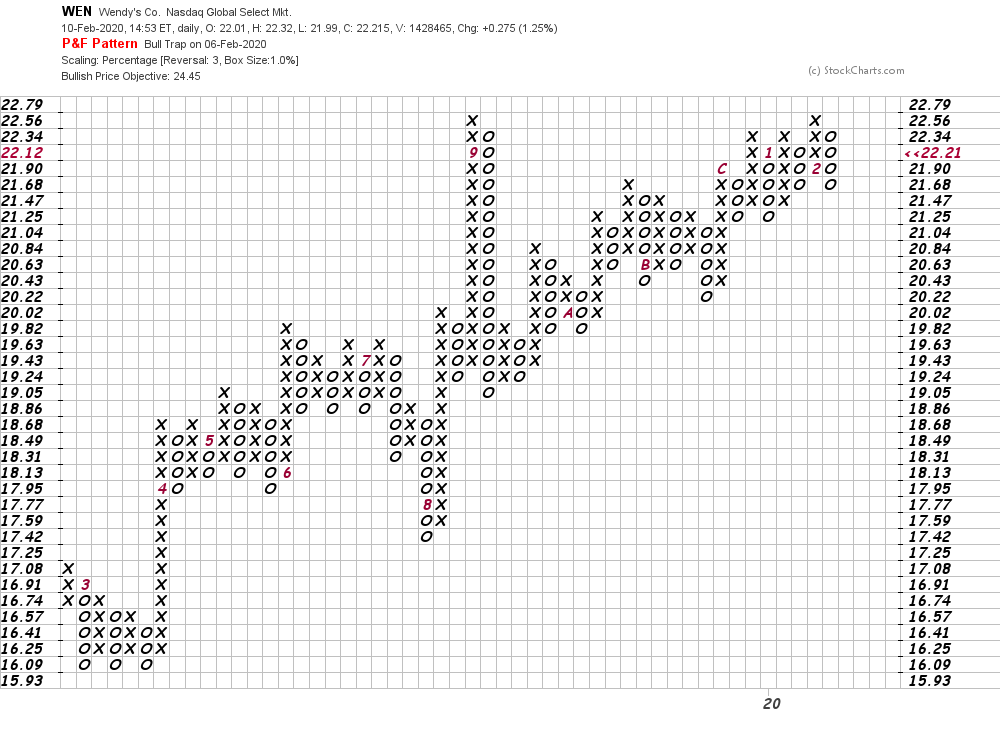 Bottom line strategy: Traders and investors who are long WEN should consider raising their sell stop protection to lock in gains and avoid losses should the rally in WEN come to an end.
Get an email alert each time I write an article for Real Money. Click the "+Follow" next to my byline to this article.
TAGS: Investing | Stocks | Technical Analysis | Trading | Restaurants | Mad Money