During the "Lightning Round" segment of Mad Money on Monday evening, one caller asked Jim Cramer about Edwards Lifesciences (EW) : "Those guys are terrific. I want to buy that one right now," Cramer replied.

The last time we reviewed the charts of EW was back on December 14 where we wrote, "Continue to hold any existing longs and consider going long or adding to longs above $88.19 - a new high on the daily Point and Figure chart. Risk $79 for a sell stop. The $104 area is our price target for now."

Prices have yet to reach our $104 price target and remain above $79 but we still want to check the charts again.
In this updated daily bar chart of EW, below, we can see that prices have been in a choppy sideways pattern since September. Prices have crossed above and below the 50-day moving average line a number of times since September. Currently EW is trading below the flat 50-day line and above the cresting 200-day line.
The On-Balance-Volume (OBV) line has been declining since the beginning of 2021 and tells us that sellers of EW have been more aggressive.
The Moving Average Convergence Divergence (MACD) oscillator moved below the zero line in late January for an outright sell signal.

In this weekly bar chart of EW, below, we can see some weakness in the indicators. Prices are still trading above the upward sloping 40-week moving average line.
The weekly OBV line shows weakness the past two months suggesting that sellers of EW have been more aggressive. The MACD oscillator crossed to the downside in January for a take profit sell signal.

In this daily Point and Figure chart of EW, below, we can see a potential upside price target of around $100 but also that a decline to $81.44 would weaken the picture. 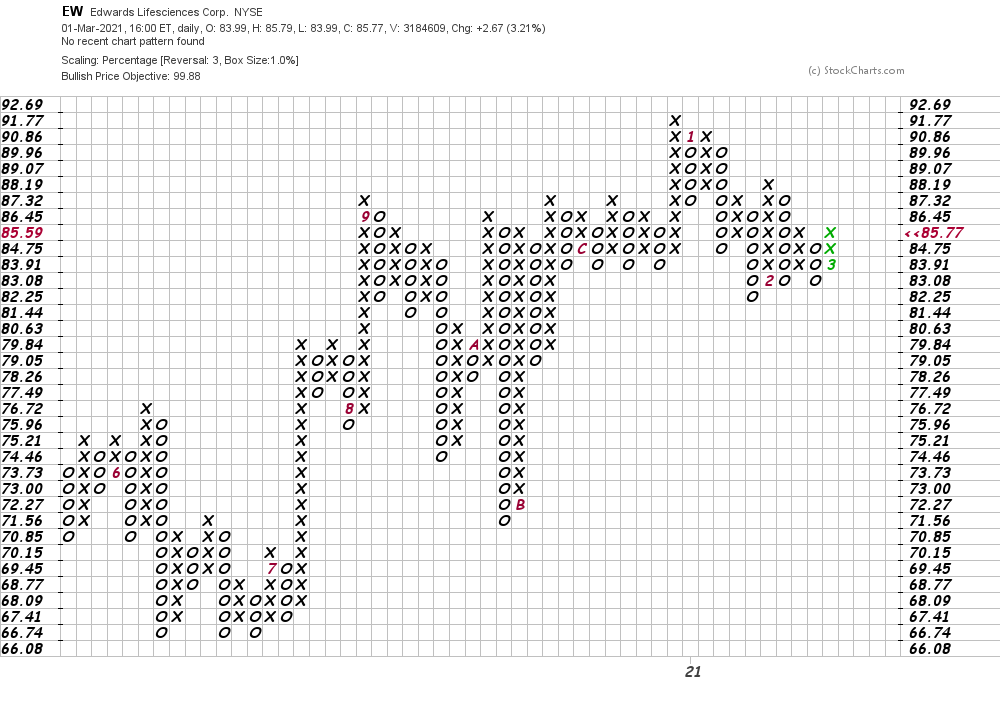 Bottom line strategy: The charts of EW have weakened in recent weeks. A rally to new highs could unfold because of strength in the broad market but I would recommend that longs raise their stops to $81 from $79.
Get an email alert each time I write an article for Real Money. Click the "+Follow" next to my byline to this article.
TAGS: Investing | Stocks | Technical Analysis | Trading | Health Care Equipment & Services | Life Sciences | Mad Money

Here's How Johnson & Johnson Stock Looks Ahead of Earnings

All eyes will be on JNJ as it releases its numbers Tuesday.

The supermarket operator could see its technical signs improve after posting its second-quarter results.

The lack of urgency at the FDA, as it is in the defense space, is alarming.