The shares of Apple (AAPL) had significantly outperformed the broader markets this week, which begs the reader, knowing that Apple is the most widely held stock across our marketplace and weighs so heavily upon our large-caps indices, just where would markets be, if Apple had suffered along with most of the rest of the market. We may find out today.

The afternoon of October 28th to be precise. Apple reported fiscal fourth quarter results that met consensus on the bottom line while falling short of expectations for the bottom line. The stock was hit rather hard in response. The next morning, with the stock on the ropes, I wrote to you here at Real Money, and after listening to CEO Tim Cook, based on the performance of the growing services sector and perceived demand for the hardware broadly, and the iPhone specifically, pending chip supplies. I increased my target price from $166 to $182 that day.

Four star (at TipRanks) UBS analyst David Vogt writes that though still elevated, wait times for the iPhone 13 Pro and iPhone 13 Pro Max have declined for the U.S., UK, Germany, France, China and Japan by roughly two days from where they were to as little as 14 days and as much as 18 days depending on locale. Voigt took the high price point as a sign of strong demand, and projects current quarter iPhone sales of 80M units, and for full fiscal year 2022, 230M units. Vogt rates AAPL as a "buy" with a $175 price target.

In addition, there have been reports of both Apple having become the number one smartphone seller in China, and then news broke of a coming iPhone SE targeting middle markets for Q1 2022.

Bloomberg News reported that Apple has told suppliers that demand for iPhone 13 has weakened. Apple had already cut production goals by some 10M units due to a lack of parts. Now, news of not supply constraints, but a slack in demand as consumers may just be taking a pass on finding the somewhat scarce, and not inexpensive smartphones. Consumers may be ready according to the story to just skip this upgrade cycle. In other words, Apple, according to this story, might not be able to make up for lost holiday sales later in the cycle. Several Apple suppliers traded lower along with AAPL overnight.

Dan Ives, the five star analyst over at Wedbush does not seem to be buying this story. Ives increased his target price from $185 to $200, calling Omicron variant concerns a "clear and present" buying opportunity for AAPL and other elite tech stocks. Ives has "increased confidence" on the entire iPhone 13 cycle going into next year.

Ives says his iPhone 13 checks are "much stronger than expected" going into the holidays and he thinks that Apple could sell more than 40M units despite constrained supplies of chips. Ives adds that a "massive product cycle" is playing out across all of Apple's hardware offerings and that investors are underestimating the cycle. He sees the chip supply issues as "nothing more than a speed bump" on what will be a multiyear upgrade cycle.

Readers will note that Jim Cramer said on CNBC this morning that "no Apple supplier would ever tell the media that Apple sales are weaker." I mean, we don't really know until we know, but that is food for thought. 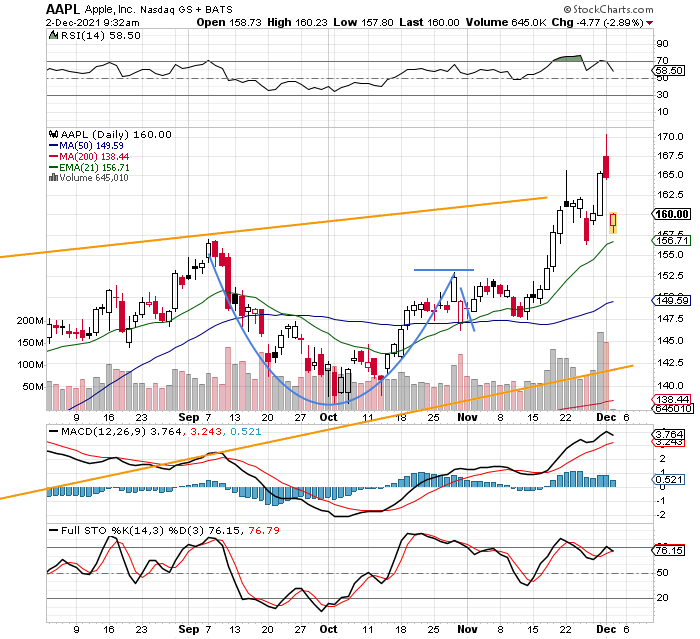 Readers will see that the breakout provided by the cup with handle pattern that I drew up for you in late October is still intact. Yes, the stock is down significantly on Thursday morning, but if we zoom out a year, we see that AAPL has been trading in a channel for 16 months. All this morning's weakness really does is allow for failure on the first actual sustained attempt to turn a piercing into a new breakout of what has been a confirmed trend. Watch the 21 day EMA ($157) for support.

In all honesty, this morning's selloff does not scare me at all in this name. I have long grown to trust Dan Ives' opinion on these matters, and if he's not undefeated, he is pretty darned close.

Get an email alert each time I write an article for Real Money. Click the "+Follow" next to my byline to this article.
TAGS: Investing | Markets | Stocks | Technical Analysis | Trading | Software & Services | Technology | Telecommunications | Coronavirus