There are always signs. No matter how careful. No matter how slow one moves, it becomes difficult not to leave some kind of tell-tale sign as one makes progress. Especially if there are a few of you. Especially if the gear is heavy. Easier to walk in water, if one is lucky enough to find a shallow stream running in the same direction as is the necessary travel. Kind of like hitting the lottery. Other than that, it's pretty much fill your socks with leaves and pull those socks over your boots in order to not leave edges or tread marks upon the earth behind you... and stay away from fresh vegetation. That said, there will still be signs. Always signs.

Often, I write to retail investors on managing risk around trouble. The first thing I try to teach is to "Understand" in order to "Identify". It goes on, We 'Identify" in order to "Adapt", and we "adapt" in order to "Overcome". Once we "overcome", we "Maintain." It all stitches together quite nicely in theory, but we can not fool ourselves. One must remain thoughtful in order to logically implement any one of these steps and then cogently use that step as a building block in order to take down the next.

Yet, to move forward on instinct alone, to take action based on undeveloped conclusions is to increase the unknown in what will always be a risky game. Serial action taken as method, trusted through trial is what separates investment, or trading from simply gambling. Through acting or not acting based on that first step, of understanding the environment, probabilities are changed, and opportunity is enhanced. Hopefully risk is reduced in relation to potential for reward.

Equity markets sold off rather harshly on Friday morning to stabilize in spots later in the day. Still, technology shares, and smaller caps took it on the chin a little bit worse than did broader markets. Makes some sense. The smaller the capitalization, the more likely a company is to be more domestic in where that firm generates sales. The better August housing data had led investors to believe that the economy was perhaps in a better place than it actually is. August Durable Goods Orders, released by the Census Bureau on Friday morning, tell a stark tale. Yes, that data-point may have beaten expectations at the headline, but the two lines that matter the most... Core Capital Goods Orders and ex-Defense both missed the mark, and both printed in contraction for the month.

Those numbers hit the tape as the Bureau of Economic Analysis posted data for Personal Income and Spending. What became obvious was that spending had slowed in August, and that reduced consumer activity had bled into the awful miss for September Consumer Confidence that the Conference Board posted last Tuesday. The question now becomes... one of where is the economy if not for the consumer, being that we sort of knew business spending was not quite at a level that we wanted to see?

Line In The Sand?

Technically speaking, the Nasdaq Composite surrendered it's 50 day SMA last week after seeing that line provide support for all of September (after providing resistance for all of August)... take a look. 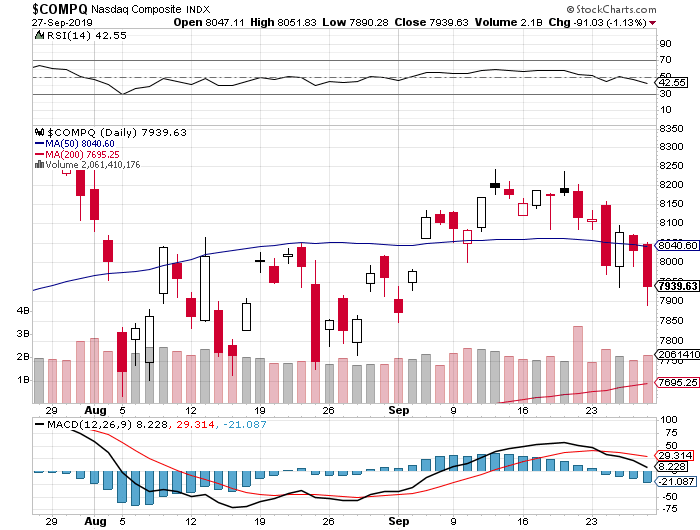 Where did that come from? Yes, perceived domestic economic weakness is a factor. The Nasdaq Composite through, is tech-heavy, and tech, especially hardware such as semiconductors is a space more reliant upon global (Chinese) growth and participation. Late morning on Friday, Bloomberg reported that the Trump administration was considering limiting U.S. investment in Chinese companies. This could include restricting or limiting the freedom of pension funds to invest in China, or the actual delisting of Chinese companies already traded in the U.S. Bear in mind that though the Treasury Department has openly denied that such a delisting was under consideration, that Sen. Marco Rubio has sponsored legislation that would indeed prevent pension funds from investing in companies not held to the same disclosure rules as are U.S. firms, as the SEC during the Obama era had granted Chinese firms this special exclusion.

Just in case the domestic economy that has now thrown a couple of unexpected road blocks at this market, and the never ending, and always changing headline environment regarding trade with China ahead of that nation's October 1st celebration and the high level meetings scheduled for about October 10th were not enough to make traders uncertain, there are several other omnipresent threats to U.S. financial markets.

The business of moving forward with an impeachment inquiry of the U.S. president, especially without a full vote of the House (which is unprecedented) is being both applauded and condemned by roughly half of the nation. I will make every attempt to hide my politics here, but the fact is that most pundits that I read this weekend are downplaying potential market impact related to these events. I see that very differently. With consumer confidence apparently stepping back, and housing data really starting to look pretty good, this has great potential to impact markets. Should the sitting U.S. president, as well as a chief rival, both suffer political damage from the development of these events, the market could be forced to price in a socialist leaning presidency. Any guess at the financial carnage this produces is just that... a guess. That said, after three years of what has been a pro-business environment (at least domestically), it won't be a walk in the park. Higher taxes and a tougher regulatory environment would hurt every single American.

Speaking of every single American, this Friday will bring us another episode of "Jobs Day". How important is this one? Yes, they are all important. For the month of August, the U.S. experienced increased participation that led to increased underemployment. I don't know how important headline job creation still is when there has already been more job openings than unemployed persons in this country for quite some time. I do know that absorbing greater participation without damaging hourly wages or average workweek is how this impacts regular folk. This will be key, with the big banks still two weeks away from unofficially opening Q3 earnings season, as this season is not expected to be among the U.S. economy's best, and is expected to extend the ongoing earnings recession into a third consecutive quarter of contraction.

One more thing, gang. There are no speakers scheduled for today (Monday), but the clown car pulls into the center ring on Tuesday, and just like at the circus, they'll come pouring out of that vehicle for the rest of the week. Between Tuesday and Friday, I am tracking at least 16 public speaking events by high-level Fed officials, including six on Friday headlined by the Chair, Jerome Powell, who will speak of maximum employment and price stability (The Fed's mandates) at 2 pm ET from our nation's capital.

For uncertain times? PepsiCo (PEP) will report the firm's fiscal third quarter this Thursday morning. Personally, I have held positions in this name this year, though not of late... as I search out our marketplace for the type of names defensive enough to tread water in a tough environment, yet exposed enough as to not cut one off from any growth resulting from positive outcomes across a number of issues. I think PEP, despite trading at 22 times forward looking earnings may be such a name. The higher than market valuation, at least to me, simply means that markets have sought value over growth this summer. Ride over? We'll know soon enough.

PepsiCo is a global operation that has experienced slow and steady revenue growth, with the strength of this growth in it's most mature market (North America), as well as in salty snacks (Frito-Lay). This has pushed gross profit margin higher. Think Americans won't keep eating this stuff because it's bad for them? I would not bet the farm on that one. PepsiCo posted free cash flow of $5 billion for Q3, and has guided Q3 toward that number as well.

This is also important. The firm pays shareholders $3.82 annually just to hang around for a yield of 2.82%. That means that shares bought at Friday's closing price of $135.60, even if the investor fell asleep for a year, would carry a net basis of $131.78 twelve months later. I think this name can be a solid add to the defensive portion of a portfolio that does not already include the name. 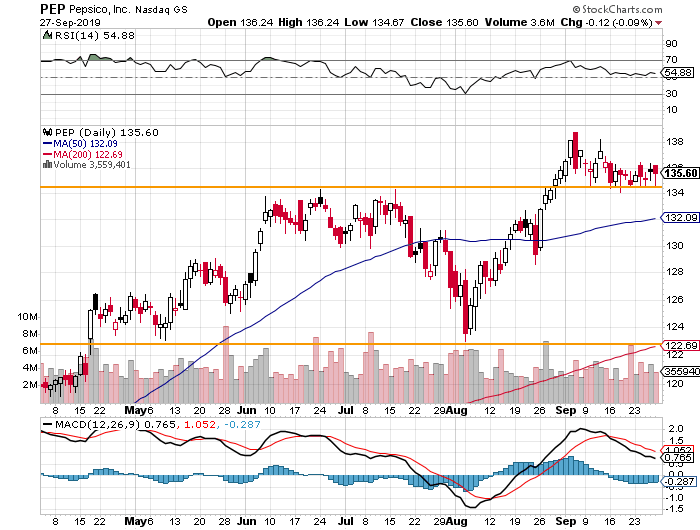 Short-term, one quickly sees a basing pattern that has run from May through August. This led to a breakout ahead of Labor Day that has stalled but not failed. The shares have found support at the upper bound of that base for a month.

Long-term? How's this for slow and steady performance? This Pitchfork goes as far back as summer of 2015, and is yet to break, In fact, these shares have occupied the upper chamber consistently since early this year.

My thinking is that I would love to grab some of these shares closer to the stock's 50 day SMA ($132) than the last sale. Don't know if that chance presents ahead of earnings. What I expect to do, is... if the PEP October 4th (Friday) puts open close to the $0.78 that they went out at, to make that sale. Then, if the shares weaken at some point this week, to purchase one-eighth of my intended position size, while selecting calls to sell against the long that provide enough value to make a dent in net basis ahead of the numbers. Pepsi rocks, and I'll have a trade. Pepsi dives, and that allocation of one-eighth will grow.

There are no public events scheduled for today.

Get an email alert each time I write an article for Real Money. Click the "+Follow" next to my byline to this article.
TAGS: Earnings | Federal Reserve | Investing | Markets | Options | Stocks | Technical Analysis | Trading | Food & Drink | China

Costco Is Winning in Retail and the Charts Show It

A look at COST amid its impressive June sales numbers.

Financial markets have been warped by policy, which has severed price discovery from underlying economic performance.performance. Know where the exit doors are along the way.

It's 'The New New Thing' All Over Again