A certain level of risk-off behavior permeated financial markets this past Friday. Profit taking after a fantastic week for equity prices had not only been expected but well telegraphed ahead of time. Some reduction in overall exposure had been in order as the impact of the Wuhan coronavirus remains the lead story for global health officials, policy makers, and economists.

For most of last week, U.S. equity markets had shrugged off the threat of what a potential global pandemic could do in terms of economic growth or corporate revenue generation. Even allowing for Friday's action, the Nasdaq Composite experienced a again of more than 4% for the week... the S&P 500 more than 3%. Even the Dow Jones Transportation Average had a nice enough week (+2.75%), something that most traders probably would not have expected one week ago.

For the week, the Information Technology sector led the way, with the Technology Select Sector SPDR ETF (XLK) running 4.4%. Within that sector, the Dow Jones U.S. Software Index, with very little inherent exposure to the Chinese economy, screamed 5.7% higher. Very interestingly however, also within the sector, semiconductors as an industry grouping would be highly exposed to China, but still did very well last week. Both the Philadelphia Semiconductor Index (SOX), and the Dow Jones U.S. Semiconductors Index saw identical 4.16% weekly increases, even after both saw Friday decreases of more than 2%.

Asian markets opened lower on Monday morning (Sunday night here in NY), as certain companies in China tried to go back to work while regionally anything beyond working from home is still not possible. U.S. equity index futures markets traded lower overnight as well. As the PBOC (People's Bank of China) announced the first batch of special re-lending funds to qualifying national and regional banks in support of production and business activities related to combating the impact of this virus, markets improved. The funds are expected to be released by Wednesday.

This put a lift in Asian equities, as well as in U.S. futures markets despite that fact that the total number of confirmed cases (globally) had now risen above 40,000. And speaking as a layman opining from his office in the middle of the night, that number appears somewhat subdued due to the lack of available testing in locales where the illness seems most prevalent. Of the 910 confirmed deaths blamed on this virus, 871 (95.7%) would be within Hubei Province in China. In fact, using the website provided by The Center for Systems Science and Engineering at Johns Hopkins University as a resource, I only count two deaths outside of Mainland China, and one completely outside of the whole of China.

Perhaps it is a belief that this coronavirus is somewhat contained, despite it's continued growth... perhaps it's the belief that central bankers have the market's back, but Friday's selloff in New York came on far weaker trading volume that most traders might have expected. Trading volume attributable to constituent members of both the S&P 500 and Nasdaq Composite experienced in aggregate lower totals on Friday than for any other single day last week (all up days), and also far lower than the selloff that markets had experienced the Friday one week prior.

What I guess I am trying to say through the use of supportive data is that I expected risk-off behavior last Friday, and we did see this, but that this risk-off behavior was both less broad, and far less aggressive than I had expected.

As you and I stand at the precipice of this brand new workweek, the threats to the marketplace remain obvious. On Sunday evening, China's National Bureau of Statistics released the national prints for inflation. While at the producer level, inflation remained under control, what looks like a serious outbreak in consumer level inflation is clearly underway. Chinese CPI printed at growth of 5.4% y/y for January. That's up from 4.5% in December, and 3.8% in November... going back to just 1.5% only 10 months earlier. Much of this growth in inflation goes back well before the breakout of this illness. The tack on all of this increased liquidity? Anyone see a chance of this upward pressure abating as industrial production becomes quite lumpy, and both expected and unexpected shortages begin to appear across the domestic Chinese economy?

This is where recent dollar strength will also matter. As those seeking haven have sought out the U.S. currency as well as debt securities denominated in the greenback, demand for the U.S. dollar has soared. The US Dollar Index (DXY) approached the 99 level on Friday, after bottoming above 96 as recently as late December. The dollar has been stronger versus almost all significant peers, but remember that the "Dixie", as it is known on Wall Street, is overweight in its exposure to the euro (and Europe is in a bad way). Some items to also keep in mind for investors beyond the negative impact of a strong dollar upon commodity prices will be reduced demand for both Industrial and Materials sector stocks with out-sized sales exposure beyond U.S. borders. This imbalance in Forex valuations will also discourage foreign travel to the U.S. for those not already frightened by the virus.

Then, there is also the reverse image of foreign investors seeking safe haven in U.S. stock and bonds. The inverse response would be a lack of willingness by U.S. investors to expose themselves to foreign markets. Remember all those talking heads at year's end that suggested that this was the year for emerging markets? Well, there's a long way to go, but year to date the S&P 500 has returned 3% to investors, and the Nasdaq Composite 6%. For sake of comparison, the MSCI All-World (ex-USA) index has returned -0.93% year to date. In other words, if you bought a foreign currency to buy a foreign security, you are being taxed in a way before you see any gain made by that security in it's home currency. Buying foreign ETFs denominated in U.S. dollars might make those markets easier to trade, but is not a way around this impact should the U.S. dollar retain its current status. If one believes the worst of the virus to have passed, then this is where your discount is. Personally, this is more in the way of speculation than I am will to go at this time. By the way, investors have probably noted that some wealth in nations with weakening currencies has been finding its way into Bitcoin. Bitcoin traded above the $10K level overnight for the first time since early Autumn.

What do we know? We know that U.S. assets, from bonds to stocks to the currency itself, are in demand as long as there is concern. What don't we know? Though we have data for confirmed infections, confirmed deaths, and confirmed recoveries, we have no idea how much bigger these numbers might actually be. How many folks in a city of 11 million, or other large cities, might not have even been reached at this point? We don't know. We don't even know if the numbers reported are honest. We do know that two weeks is up since this news became a big deal. If the two week incubation period is correct (who knows?) then we now see how broadly this virus has crossed international borders.

Add risk now? Uhm, I'm good. Thank you. The S&P 500 traded up from 18.4 times forward looking earnings at the start of last week to 18.8 times by week's end, according to FactSet. For those who don't crunch numbers for a living, that's one heck of a pop in one week, especially when already at elevated levels to begin with. To be straight with you, it's not all safe haven seekers.

Corporate performance has been far better that expected. The blended rate (results & expectations) for S&P 500 Q4 earnings growth ran from -0.3% to +0.7% in just one week, and from -1.9% in just two weeks. All of the sudden, there is now light at the end of the tunnel for the S&P 500 earnings recession that the marketplace has been mired in since last posting year over year earnings growth in Q4 2018. The problem now becomes the first quarter. Those estimates are coming in rapidly in response to the expected economic impact of this virus. The question now becomes just how transitory in nature the big money sees this impact.

Alibaba (BABA) reports quarterly performance on Thursday morning. It is here that perhaps investors learn some insight into what impacts are being seen within China. While one might think that an e-commerce type operation could do well in a quarantined environment, it's not quite that easy. You still need delivery services workers that then become quarantined themselves. This could be the most important earnings release of the week. 50 day SMAs are always important, but I don't know if one of these lines has ever been this important... 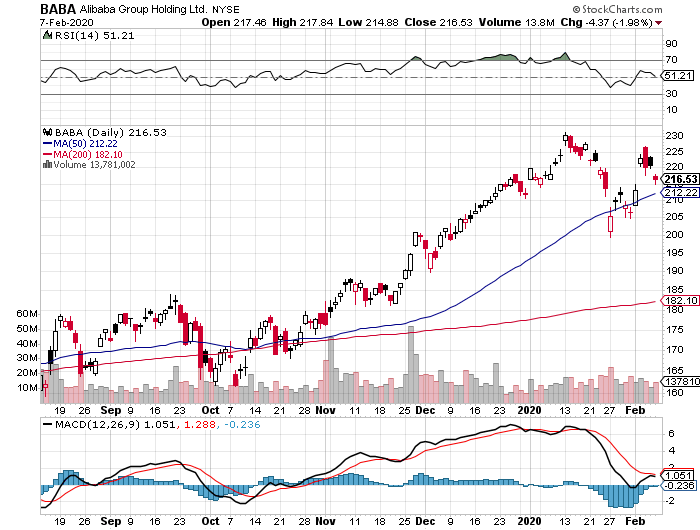 In addition to potentially key insight provided on the Alibaba call, investors will also look to hear news related to both sides of the demand/supply equation as Applied Materials (AMAT) , Cisco Systems (CSCO) , and Nvidia (NVDA) all report later this week as well.

(Cisco Systems and Nvidia are holdings in Jim Cramer's Action Alerts PLUS member club. Want to be alerted before Jim Cramer buys or sells these stocks? Learn more now.)

Get an email alert each time I write an article for Real Money. Click the "+Follow" next to my byline to this article.
TAGS: Bitcoin | Earnings | Investing | Markets | Stocks | Technical Analysis | Trading | E-Commerce | China