The bell had rung its last. The regular trading session has ended. It took about five minutes. It felt like a hundred. There it goes... "Disney earnings on the tape !!" For the firm's fiscal first quarter, Disney posted an adjusted EPS print of $1.06 (+231% y/y), crushing Wall Street by more than 40 cents. Revenue generated over the three month period totaled $21.38B. That too beat consensus, and was also good for annual growth of 34.3%.

Total segment operating income increased 144% from the year ago period to $3.258B, while net income from continuing operations printed at $1.152B, up from $29M a year ago. You can do the math if you like. The improving conditions that Disney found itself in in late 2021, while still restricted in several ways, was not really comparable to the environment experienced by this firm in late 2020. Free cash flow as certain expenses increased, did decrease from $-685M a year ago to $-1.19B.

Revenue increased 15% to $14.585B, while operating income decreased 44% to $808M. The segment beat projections on both of those numbers.

Linear Networks is still the breadwinner here, meaning it is paying the bills, but it's not the story. At least not the headline story. Domestic Channels revenue increased 1% to $6.2B, but saw a 21% decrease in operating income reflecting lower operating income at both Cable and Broadcast. This is where higher production costs and increased marketing expenses are more than offsetting increased advertising revenue.

Direct to Consumer grew rapidly while suffering greater operating losses, primarily driven on both lines by Disney+ more than at ESPN+ or Hulu. The big story here is the subscription growth that is ramping back up. Disney is willing to subsidize this business unit in order to prioritize growth in this area. The strategy is working. Disney+ subscriptions (globally) increased 11.8M subs over the three months versus expectations for 7M. Total subs now stand at 129.8M, up 37% from a year ago. Hulu SVOD subscriptions increased 16% to 40.9M, Hulu Live TV & SVOD subs increased 8% to 4.3M, and ESPN+ subscriptions increased 76% to 21.3M.

Content Sales/Licensing & Other is another unit that produced a loss. This was primarily due to reduced theatrical distribution results and higher film cost impairments that were partially offset on the Direct to Consumer side.

Revenue increased 101% to $7.234B, while operating income improved to $2.45B, up from an operating loss ($-119M). The segment absolutely crushed expectations for both of these numbers.

Domestic parks enjoyed increased per capita spending, up more than 40% from pre-pandemic levels, which speaks to Disney pricing power. The parks are still operating with Disney's self imposed limits on capacity as are the cruise ships.

International parks were able to post an operating profit despite temporary closures across a number of regions globally.

Consumer Products, while still profitable, did suffer declines in performance as a substantial number of Disney branded retail stores across both North America and Europe had been forced to close intermittently due to the pandemic.

The firm's net cash position is down 9.5% from three months ago to $14.444B. Current assets are down less than that to $32.913B, as receivables are higher. Current liabilities are also down, to $30.037B as accounts payable are considerably lower. That makes for a current ratio of 1.1, which is not awesome, but does get a passing grade from your pal Sarge. It's kind of like getting a C. Your parents won't like it, but you're not getting kicked out of school.

Total assets of $203.311B easily outweigh total liabilities less equity. The firm does have $47.349B in borrowings on the books (down small). Of that total, $6.783B is considered to be current.

I can only find four five star rated (by TipRanks) analysts that have opined in any way in response to these earnings. Among the four, there are two "buy" ratings or buy equivalents, and two "hold" ratings or hold equivalents. There are only three target prices across the four as one of the holds, Laura Martin of Needham declined to offer a target. The other hold has a higher target than one of the buys which tells us nothing. The most optimistic among the four is Douglas Mitchelson of Credit Suisse who has a $218 target price. The other two target prices check in at $175 and $170.

My Dog In This Fight

Long-time readers know that I named Disney as my "Stock Pick of the Year" in late December. I came in long the equity. Large position. Average price $144.15. I had also written $150 calls expiring this Friday and some puts with far lower strike prices also expiring this Friday that either knock $3 off of my net basis, or add $3M to my net exit price if I do indeed end up being called away tomorrow night, which appears to be likely. So, I'll probably be forced out with a 6.15% profit

Of course, this being my pick of the year, I will have to engineer as skillful a re-entry as possible. At least you know that I do indeed play my game as much as talk about it. Note to my fellow talking heads... offense intended.

It's very nice to see the Mouse get off of the canvas. It's very nice to see Disney have a nice quarter with Bob Chapek at the helm as he did take this, leading a company specializing in entertaining mass audiences as planet earth went into its most economically damaging pandemic in at least a century.

It's clear that while cable and broadcast are eroding slowly, they are both still powerful drivers capable of getting the businesses where the firm must spend capital. The re-emergence of the theme parks, resorts, and cruise ships can go a long way here as the firm has no plans to cut back on content in the least. Quite the contrary. Now if we can just keep this darned virus from re-imposing itself in a big way, Disney is indeed, on its way. 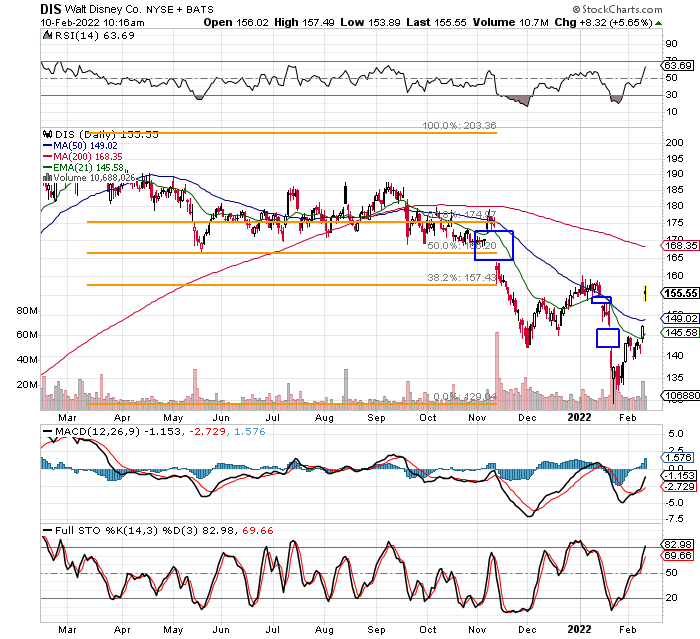 The shares have gapped higher this morning, and have filed the second of two gaps created in January to be filed in February. Relative Strength is "almost overbought" as is the Full Stochastics Oscillator. The daily MACD is pointed in the right direction, but has some room to the upside. It is key that DIS retook its 50 day SMA on Thursday after retaking its 21 day EMA on Wednesday.

There is an unfilled gap between $164 and $173 that was created back in November (earnings). However, there is a Fibonacci retracement level to get through at $157, and the stock has also just created an unfilled gap to the downside. In other words, I would not be surprised to see DIS consolidate in the $150's for a little while. That said, it is difficult to truly be surprised at all these days. That Fib level is also close to the $160 early January high.

For now, my pivot would be that $160 high, which allows me to place a target price up around $190. For me, though, very likely, my large position in DIS will be a large cash position before Super Bowl Sunday. Re-entry? I just told you that these shares just created a new gap. I'll be the creepy looking old guy in the ghillie suit.

Get an email alert each time I write an article for Real Money. Click the "+Follow" next to my byline to this article.
TAGS: Earnings | Investing | Stocks | Technical Analysis | Trading | Consumer | Media | Movies | Resorts and Hotels | Sports