For the three month period ended June 30th. Livent posted adjusted EPS of $0.37 (GAAP EPS: $0.31) on revenue of $218.7M. Top and bottom line results both beat Wall Street while on a year over year basis, earnings grew 825% and revenues grew 114%. Adjusted EBITDA landed at $95M, up 78% sequentially and up six-fold over the year ago comp.

Last week, Livent announced a supply deal with General Motors (GM) . The firm addressed the deal almost right away in last night's earnings related press release. The agreement is set to last six years, which will deliver lithium hydroxide starting in 2025 and bring with it a $198M advance payment from GM to be made at some point this calendar (2022) year. This increases certainty for Livent as the firm funds and plans capacity expansion. Livent CEO Paul Graves commented: "Auto OEMs are becoming more focused on securing reliable lithium supply to support their own aggressive electrification plans."

Where were we? Oh, current assets... Receivables and inventories ($156.3M) were both higher over six months, leaving current assets at $386.3M, which is largely in-line with year's end 2021 despite having made large investments. Current liabilities amount to $148.8M. This puts LTHM's current ratio at a quite robust 2.60. Ex-inventories, the firm's quick ratio comes to 1.55. Still outstanding.

Total assets add up to $1.721.4B dominated by property, equipment and those already mentioned investments. There is no entry for intangible assets of any kind. None. Ooh-stinkin'-rah. Total liabilities less equity comes to $441.3M. Of that, $241.2M is related to long-term debt. I would normally recommend reducing debt in relation to cash, but we already know what the firm is doing with their cash and approve. This is a very strong balance sheet.

Readers should know that I am long this stock and have been impressed with this company for quite some time. Maybe I'm biased. That said, the performance is I think plain to see. Demand for lithium, I can say is inelastic but is probably going to be at least somewhat durable as all things, but mostly automobiles are still in the early innings of trying to go green. Before you ask, the stock trades at an above market, but I think reasonable 21 times forward looking earnings. 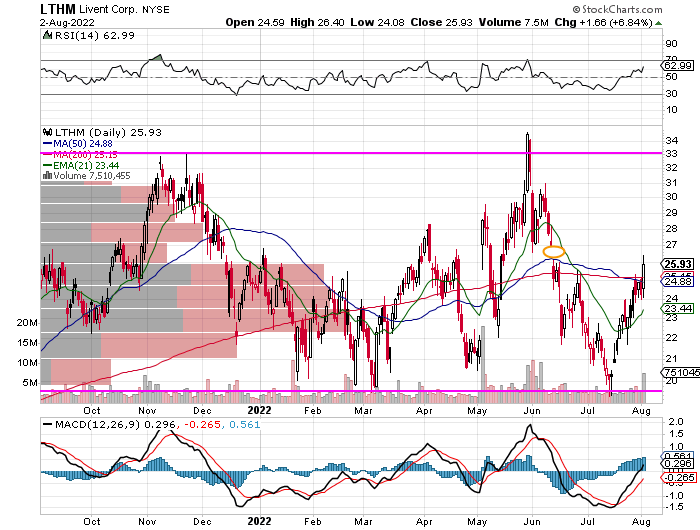 Looking over the past year, readers will see that this stock has traded in a tight range. Support has presented at the $20 level or just below, repeatedly. Resistance has been much less regular, but has apexed in the low $30's. 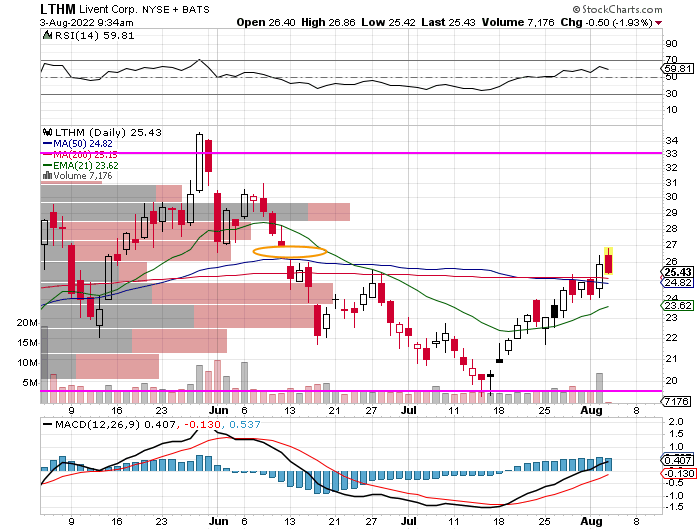 Zooming in a bit, readers will see that LTHM has been trying to form a cup pattern, and has retaken its 50 day and 200 day SMAs this week. Should the stock be able to hold these lines that could be the catalyst that brings more professional investors on board.

As of June, LTHM had 602 funds invested in the name. Competitor Albemarle (ALB) , which is more diversified and more well known (reports tonight) has a rough 1,752 funds on board, so we know there are more professionals out there invested in this business that are not yet in LTHM.

Get an email alert each time I write an article for Real Money. Click the "+Follow" next to my byline to this article.
TAGS: Investing | Stocks | Technical Analysis | Trading | Automotive | Industrial Goods | Electric Vehicles | Earnings