Every morning, I take my first break somewhere in between 06:00 and 06:30. I get cracking around 03:30 every day, and by that time, I have a general idea of what I want to accomplish (or try to avoid) that day. I feed my dog, a six year old female named Mooshi, and then I feed myself. Once the dishes are clean, we go out front. The neighborhood is very quiet at that time, especially since lockdown. Mooshi is very well behaved, and really doesn't need to be leashed on this mini-walk. This is our quiet time. This is my time for prayer, and she pals around beside me. This morning, she took off after a squirrel that happened to be on a front lawn two houses away. I called her name once. Nothing. I called twice. She came running home. Told you. She's a good dog, and wow... can she run.

I alluded in this morning's Market Recon to another runner, another kind of dog. One that I have had interest in since the public debut back in September, but has not traded especially well since. The growth in revenues as well as across basically all operating metrics is at this point, not just astonishing, but consistent. Yes, I think I do have to be long Datadog (DDOG) , but now that the race is on, the trick will be to admit my mistake in having played games around this name in the past, and establishing that long position in some kind of intelligent way.

For the first quarter, Datadog reported adjusted EPS of $0.06. A loss of two cents had been expected. Revenue landed at $131.25 million, growth of 87.4%, and also a serious beat. Adjusted operating income amounted to $16.1 million, produced through an adjusted operating margin of 12.3%. Operating cash flow for the quarter totaled $24.3 million, with free cash flow of $19.3 million. The activity left the firm with a cash position, including equivalents and marketable securities of $798.5 million by quarter's end. Keep in mind that the IPO raised $648 million.

The firm operates a cloud-based monitoring and analytics platform (big data) for developers. Businesses use Datadog to aid IT departments in running their computer infrastructures. On the impact of the Covid-19 pandemic, CEO Olivier Pomel, in a written release, said, "This crisis has demonstrated the need to be digital-first and agile, has underscored the importance of observability into cloud environments, and reaffirmed the long-term opportunity for Datadog." On that note, by the end of the quarter reported, Datadog had reached a total of 960 clients with annual recurring revenue of $100K or greater, up from 508 one year earlier.

This morning (Tuesday), I count so far, eight sell-side analysts that have opined in some way on the name. Each and every one of the eight comes highly rated, at least 4.5 stars out of a possible five at TipRanks. Of the eight, I see seven "buy" ratings (or the equivalent) and one "hold." Of the eight, the average target price is now $66.25, with a high of $75, and a low of $59 (the hold). The phrases "positive trends", "new customer acquisitions", and "early leadership in a fast-emerging market" are the kinds of things being said about this name. 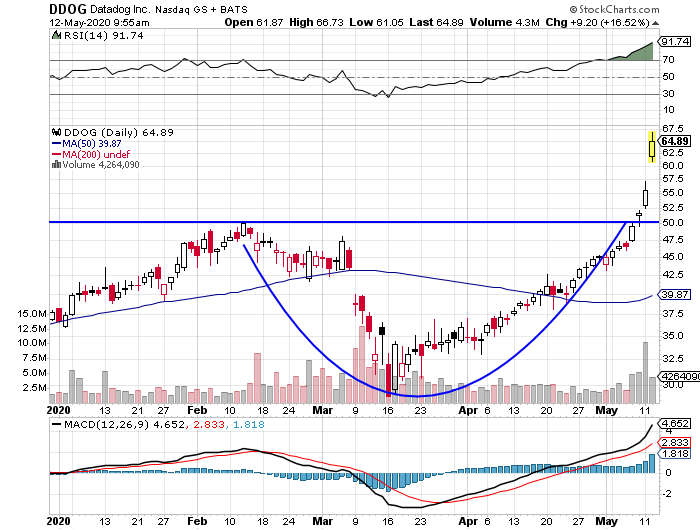 This is the obviously updated chart used this morning. The last sale is now almost 10% higher. Do I chase at this point? I don't think so, not my style, though with a short interest that is really not large at all, I believe the buying is real. Not really much of a squeeze.

What I can do, is instead of boldly purchasing the name at the top of the chart, I could, and probably will sell $60 puts expiring this Friday for a rough $0.85, and a like amount of $55 puts expiring in June. Those are currently going for $1.60. Assuming the sale of minimal lots, one contract each, there are really three outcomes should the trader not cover the puts written. One... DDOG trades higher through both expiration dates, and the trader pockets $2.45. Two... The trader gets tagged at $60 by Friday, but not at $55 in June. In that case, the trader ends up long 100 shares at a net basis of $57.55. Three... the trader gets tagged at $60 on Friday, and at $55 in June. Should this happen, the trader winds up long 200 shares in a little more than a month at a net basis of $56.28.

The strategy here is to either pocket some change, or wind up paying yesterday's prices for a stock now on a serious run higher.

Get an email alert each time I write an article for Real Money. Click the "+Follow" next to my byline to this article.
TAGS: Investing | Options | Stocks | Technical Analysis | Trading | Software & Services | Technology