Growing up, my favorite board game was chess. ( I'm lying, my favorite game was Strat-O-Matic baseball, but I really did like chess.) My dad taught me to play chess at a young age. My dad also helped me set up my own retail trading account when I was 13 with with two years worth of dough that I had saved selling newspapers. My dad is one of those crazy high IQ guys. I owe him my work ethic, and what brains I do have.

There may be a lot of things that we do not know. Then there are a few things that we think we do know. One item for sure, is that they don't make corrections like they used to. I have never really been one to put much weight in the broadly understood measure of what defines a stock market correction (-10%), or a bear market (-20%). What I do know is what a bear market feels like, and these markets have certainly started to feel that way. The Dow Jones Industrial Average bottomed out in Monday's regular session at 11.3% below the October 3rd highs that were created just as Jerome Powell prepared to nuke the financial markets with his "long way from neutral" comment.

The Dow rallied hard off of the lows of the Monday session, actually closing up small for the day, or a "mere" 9.4% below that Oct. 3rd peak. The day belonged to the tech sector, specifically both semiconductor names and software (the cloud) alike, as well as a defense and aerospace group sub-sector that finally showed a little life. What really happened? That was an algorithm induced story. Apple (AAPL) moves markets. Period. Headline seeking algos latched onto the story that courts in China had ruled against Apple, and in favor of Qualcomm (QCOM) in a case involving two patents that would directly impact sales of older iPhones in that country.

Then as Josh Brown and Jim Cramer discussed AAPL's valuation from both a technical and fundamental perspective on television, the pendulum suddenly swung in the other direction, and then held for the day as news broke that Apple would appeal the ruling. I have no idea if patents have been infringed upon. I am no lawyer, and I am certainly not a tech geek. However, I do know that Apple competes directly against Huawei around the globe for smartphone sales, and that analysts Edison Lee and Timothy Chau (Jefferies) pointed out in a report several days ago, and reported at Bloomberg... Huawei is dependent upon Qualcomm chip technology patents in 4G and 5G radio access technology in order to compete.

What do I know? I have for what it's worth always enjoyed Chess. It appears to this commoner from Queens, New York that we are at the point of the game where each side starts losing pieces that actually matter. Equity index futures are moving higher this morning as news breaks regarding an overnight phone call being seen as the next step being taken on trade talks. On the call were Treasury Secretary Steven Mnuchin, U.S. Trade Representative Robert Lighthizer, and Chinese Vice premier Liu He. This was followed by a brief, but possibly optimistic, statement made by the Chinese side.

As plain as the nose on one's face, the U.S. will at some point face an unsustainable fiscal situation. Many might argue that this point is already in the past. As a fiscal conservative, I watch budgetary developments very closely. As someone who often invests in defense and aerospace names, I see this double edged sword from both sides.

Earlier this autumn, President Trump had expressed what seemed like dismay at the time over expanding budget deficits, and asked all government agencies to cut spending for next year by 5% from this year's levels. Reports circulated on Monday that the president had told DefSec James Mattis to go ahead and submit a proposed (FY 2020) defense budget of $750 billion, up from this year's $733 billion. A 5% reduction would have landed the defense budget just above $696 billion. Hmm?

Negotiating tactic? Almost certainly. That did not stop all of our favorite defense names from having a nice afternoon, though from a personal point of view, they had all passed what I refer to as "panic points" and had forced the hand of discipline at long ago points on the chart. The two two big names that I hung on to, Lockheed Martin (LMT) , and Raytheon (RTN) were up 4.5% and 3.7%, respectively. Both were outperformed by Northrop Grumman (NOC) , up 5.1% for the day, but also an under-performer in the wake of the midterm elections.

One defense name that never even approached my personal panic point also had a very nice day. Sarge-fave Kratos Defense (KTOS) popped as well. Kratos started acting well late last week as a report in DealReporter mentioned that interest in the name had recently been ramping higher. On Monday morning, Goldman Sachs upgraded KTOS to a "Buy", and added a couple of expectations worth repeating. Goldman expects double digit revenue growth through the middle of the next decade after first experiencing 20% organic growth in each of the next two years. Goldman also hiked the firm's target price from $13 to $20.

By the way, also last week, KTOS landed a contract to provide engineering and program management support services to the U.S. Navy and U.S. Marine Corps. The deal comes with a five year base, as well as a five year option, comes with the potential value of $5 billion per annum. Gang, KTOS has not produced a $200 million quarter since 2015, so at least now you know why GS sees such a pop in revenue. It was headline material. 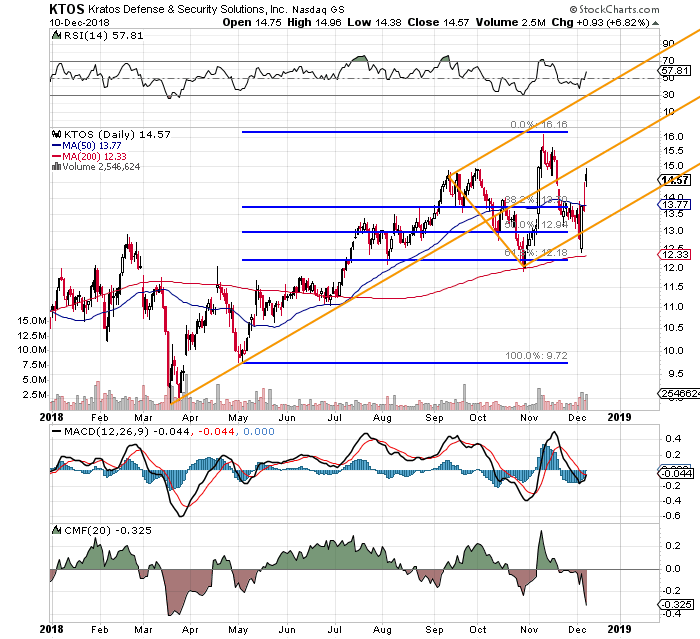 As you can see, very recently Relative Strength moved sharply to the upside, while the daily MACD appears poised for an imminent crossover of the bullish variety. Is a new Pitchfork forming? Quite possibly, though the model that I have laid out for you suggests that if the name were to head seriously higher that the November high again becomes resistance in late December/early January. As readers and viewers know, this stock has been a personal favorite for a long time and has served me well in otherwise difficult markets. I was well ahead of Goldman on the positive rating, but they are ahead of me on the target price. The public reacts to Goldman's calls, therefore, I am getting my target price out of the darned way.

As options markets are thin in the name, examples use last bid, instead of last sale, or implied value in order to avoid misleading readers. Kratos is scheduled to report quarterly earnings on 26 February.

This sale of these options reduces this trader's initial net basis to $12.27.

(Apple and Raytheon are holdings in Jim Cramer's Action Alerts PLUS member club. Want to be alerted before Jim Cramer buys or sells AAPL or RTN? Learn more now.)

Get an email alert each time I write an article for Real Money. Click the "+Follow" next to my byline to this article.
TAGS: Economy | Federal Reserve | Investing | Markets | Stocks | Technical Analysis | Defense | Software & Services | Market Recon | Analyst Actions