I win the bad trade of the week award. Two days ago, I tried to catch the knife on Net Element (NETE) . My approach was buy half a position on Wednesday, then buy the other half on Thursday as that pattern worked well four previous times over the past few months. While it may still work for an entry, it has also buried me with a 10%+ drawdown in less than 48 hours. Not exactly awesome sauce to end the week.

I've spent the better part of two days combing through the 8-K to uncover the reason for the harsh selloff. My initial thoughts were the signed merger agreement triggered an unlocking of shares. I haven't seen any filings from insiders yet, but it could still come. We do know the current execs and board will be replaced, so they may have little motivation to hold their shares. Also, the company did hold convertible notes, so it is possible the debt holder is aggressively hedging their position.

Honestly, reading the 8-K and not having the answer jump out at me felt like staring at a sterogram but never seeing the image beneath the pattern. Fun fact, I've never been able to see an image. And just like the stereogram, I didn't find the answer I wanted. I did manage to unearth a Mullen Technologies investor presentation from September 2019. That presentation encompassed the company's goals and projections. Although some of the funding projections changed because of the merger, virtually everything else the company projected has fallen into line. The timeline is slightly off thanks to Covid but not by much. While I don't love the action or the chart, the underlying fundamental story appears strong, so I'm continuing to hold.

In the same space, Spartan Energy (SPAQ) continues to trend lower in a clear channel after its initial big surge a month ago. This one will be a merger with Fisker Automotive likely in the fall of 2020. The companies have until February 2021 to finalize the merger, but I expect we'll see it closed before that time. Shares have taken a hit after Fisker announced in a roadshow that it had not finalized a deal with an OEM yet. The concept of working with an OEM is to keep fixed costs lower for production.

Fisker has been somewhat active on Twitter (TWTR) . Several of the recent tweets have been cryptic in nature alluding to some kind of news. Of course, rumors will fly as to what that news entails, but anything that points to an OEM could light a fire under shares. Unlike NETE, this one doesn't look like a falling knife. The stock has bounced off the 50-day simple moving average, so we have an idea on where we'd place a closing stop loss. I'd likely use $11.50 rather than $11.89. Breakout only traders will want to see a push over $13 to get involved. 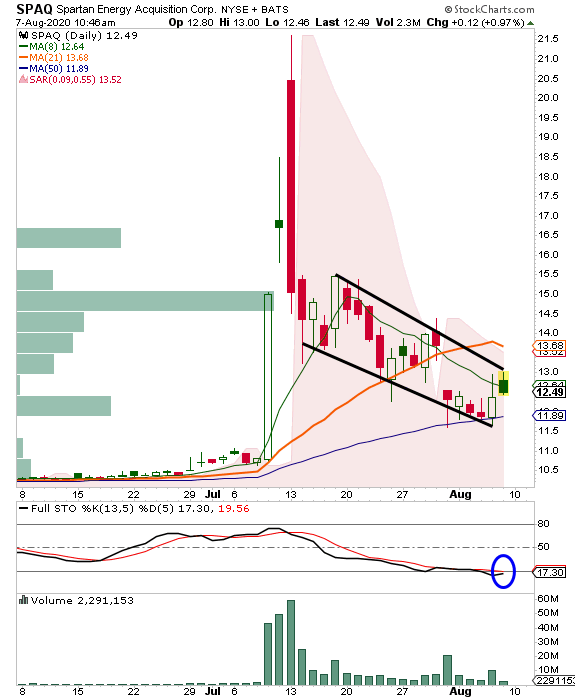 I think we're still in the early stages of the non-Tesla electric vehicle stocks, so I'm happy to tuck away both NETE and SPAQ for the next 6 to 12 months as I believe both stocks can double from their current prices.

Get an email alert each time I write an article for Real Money. Click the "+Follow" next to my byline to this article.
TAGS: Mergers and Acquisitions | Investing | Markets | Stocks | Trading | Electric Vehicles

The market is concerned that these taxes would trigger a rush to lock in gains before possibly higher rates went into effect.

Jim Cramer: If the Capital Gains Taxman Cometh, Be Ready for Anything

Don't fear the taxman, view this one as an opportunity, not a penalty.

Take the Pedal Off the Metals?

A deep dive into gold, silver and copper.

Here's how to play it.