On Wednesday night, after Fed Chair Jerome Powell had already lit a torch to equity markets, Qualcomm (QCOM) had to report the firm's fiscal fourth quarter financial results and unfortunately for the shares, set guidance for the current quarter.

For the three month period ended September 25th, Qualcomm posted adjusted EPS of $3.13 (GAAP EPS: $2.54) on revenue of $11.396B. The bottom line met  Wall Street's expectations while the top line number not only beat Wall Street, but was also good enough for year over year growth of 22.1%.

Adjusted EBT (earnings before taxes) increased 26% to $4.142B as adjusted net income increased 22% to $3.548B. The lion's share of the adjustments made ($0.39 worth of EPS) was for share based compensation purposes. Most of the rest was for "other items." Free cash flow improved from $647M for the year ago comp to $812M. The quarter reported was not the problem.

Taken directly from the press release... "Given the uncertainty caused by the macroeconomic environment, we are updating our guidance for calendar year 2022 3G/4G/5G handset volumes from a year over year mid-single digit percentage decline, to a low double-digit percentage decline. The rapid deterioration in demand and easing of supply constraints across the semiconductor industry have resulted in elevated channel inventory. Due to these elevated levels, our largest customers are now drawing down on their inventory, negatively impacting the mid-point of our EPS guidance for the (fiscal) first quarter of 2023 by approximately ($0.80)."

Qualcomm ended the quarter with a net cash position of $6.382B and inventories of $6.341B. Cash is down significantly over the past year, while inventories have almost doubled. Current assets are up small over that time to $20.724B. Current liabilities come to $11.866B, including $1.945B in short-term debt. This brings the firm's current ratio to 1.75, which is strong and in-line with the firm's past balance sheets. Qualcomm's quick ratio, however, works out to 1.21. Now this is still not even close to being a problem, just be aware that a year ago the firm's quick ratio stood at 1.41.

Total assets add up to $49.014B including $12.39B in "goodwill" and other intangibles, which is not a problem. Total liabilities less equity comes to $31.001B. This includes long-term debt of $13.537B. This balance sheet is not weak, and that's a good thing because it looks like the firm's swollen inventories and the swollen inventories of the firm's customers could damage sales for more than just one more quarter. Not imperative, but my opinion is that I would like to either see a reduced debt-load or an increased cash balance. Maybe a little bit of both.

I have found 13 sell-side analysts that are rated at four or five stars (out of five) at TipRanks and have also opined on Qualcomm since these earnings were released. Of those 13, there are nine "buy" or buy-equivalent ratings and four "hold" or hold-equivalent ratings. One of the "holds" declined the opportunity to set a target price. The average target price across the other 12 is $143.42 with a high of $170 (Kevin Cassidy of Rosenblatt Securities) and a low of $105 (Gary Mobley of Wells Fargo).

The firm really did not say anything that would make investors choose to allocate new capital toward this stock. That's in addition to the Fed doing its best to push investors out of risk. 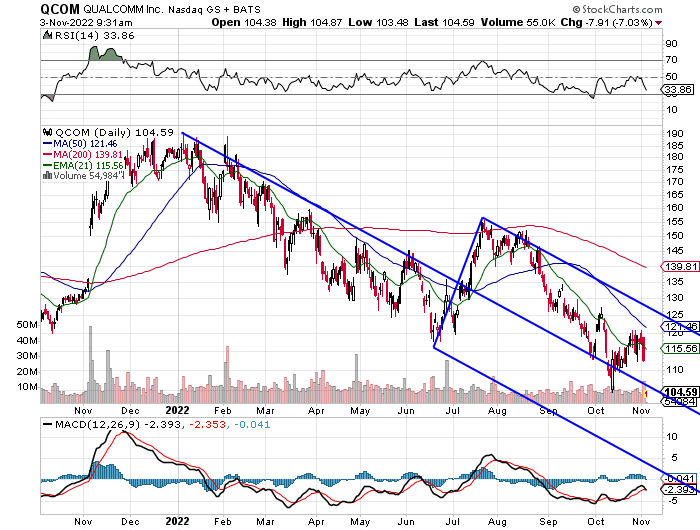 The shares, which have been in a downtrend since December 2021, had been trying to add an upper chamber (creating a Pitchfork model) since July. The shares are now, with this selloff, creating a gap and dropping below the central trendline - which had been stiff resistance December through June - for the first time in a month. The stock has now lost contact with its 21 day EMA and has not touched its 50 day SMA since early September. Relative strength is soft, as is the daily MACD. Technically, the stock is positioned to fall further.

That said, the stock trades at just eight times forward looking earnings... The company does have the balance sheet it will need to weather this storm, and it does yield 2.67%. There will be a time to buy this stock. When? You see the rapidly descending 50 day SMA. If the stock rallies at all in coming weeks, the last sale and that line will meet. Then, at least some portfolio manager will decide to increase exposure.

My idea for this name would be to try to bunt for singles in a risk-controlled manner. Don't even touch the equity for now. Maybe do something like sell a bear put spread. An example would be writing November 11th QCOM $100 puts for about $2.00, while simultaneously purchasing a like number of November 11th $96 puts for $0.95. The idea would be to pocket the net credit of $1.05, while capping the downside risk at $4.