Apple (AAPL) kicked off the firm's annual Worldwide Developers Conference, referred to in short as WWDC, on Monday. Though the event will last the entire five day workweek period, it was CEO Tim Cook who stole the show during a 107 minute keynote presentation. There is just so much here, it leaves a trader who has traded the shares relatively well over the first half of the year, why he did not just own the shares the whole time and trade something else for sport. That said, let's just look at the story that is being told. Quite complex. Quite a lot.

Still some quirks. Supply chains remain problematic. Covid-19 continues to hamper the retail environment. However, Apple remains the greatest consumer electronics company of all time, and they are certainly not done.

There was plenty. The headline according to most of the media was the fact that the very first Mac computers using homegrown processors will be available by the end of the year. The firm is taking this business away from Intel (INTC) , who Apple has been working with for 15 years. Completing the switch will take about two years. Apple claims that its newly designed custom chips are both more efficient and offer a higher performance level regarding graphics. Before feeling bad for Intel, one might recall that Apple paid about $1 billion last year for Intel's modem business.

This is the latest news, but is really part of Apple's strategy, which is headed toward the design and manufacture of its own hardware components. This is known as "insourcing."

According to Wayne Lam, who I found in the Wall Street Journal, roughly 42% of core components for iPhones are now made internally. The result? Certainly one can expect to see reduced expense resulting in expanded margin. Not to mention, increased flexibility in design and in release date manipulation, should global conditions develop outside of any individual company's control.

Aside from the major news, which was this "insourcing", all of the firm's consumer favorites saw some kind of improvement made to either usefulness or ease of function. The iPhone will see an upgrade to IOS 14. Widgets will replace apps on home pages, which will declutter the device. The device will automatically organize those apps in a more user friendly way and a picture in picture feature is on the way. The iPad will finally have a 'Scribble" function that will allow hand-writing as if on paper that can then be converted to text. (Bet Apple can't figure out my catscratch, I know the nuns couldn't.)

The Apple Watch intrigues me. Now, there will be a few health tracking features added, a "Sleep Tracker" being the star addition. There will also be a handwashing timer that automatically realizes what one is doing and counts down. What the watch needs to do, in my opinion, is compete with the Oura Smart Ring that the NBA and some casinos in Las Vegas are buying for employees. The ring, due to a "readiness" reading, has been with some accuracy, informing pre-symptomatic Covid patients who feel fine that all is not fine, and gets them out of public circulation.

Other lower profile but interesting changes would be a new privacy feature that allows users to simply permit approximate location rather than be forced into either permitting precise location finding or none at all. In addition, the newer AirPods will be upgradeable to the capability of seamlessly switching audio playback between multiple Apple devices.

What Are They Saying?

A plethora of sell-side analysts have opined on Apple since this event kicked off on Monday. In an effort to reduce the clutter myself, I pretty much excluded any analyst not rated at a minimum of 4.5 stars out of 5 at TipRanks. If this somehow leaves out your firm's talent, I apologize. I have noticed 10 analysts writing since Monday that pass through this screening. Eight of the 10 have either initiated or reiterated "Buy" ratings. There are two "Holds". Yes, there was a "Sell" rating from a well-publicized analyst working at a well-known firm on Monday who did not pass my simple 4.5 rule.

The average target price across the group was $367.50. The high was $400, and there were four of those. The low was $250, and was $70 below the second lowest. Why is this interesting? The stock is a buy. Right? Yet the shares trade with a $364 handle while I write this missive. I mean, even at the $400 target, that's less than a 10% run from here. Certainly nothing to sneeze at. The shares already trade at the average, or close to it. Of course, there is the $3.28 annual dividend. The yield is a little light, but that certainly is not "nothing." 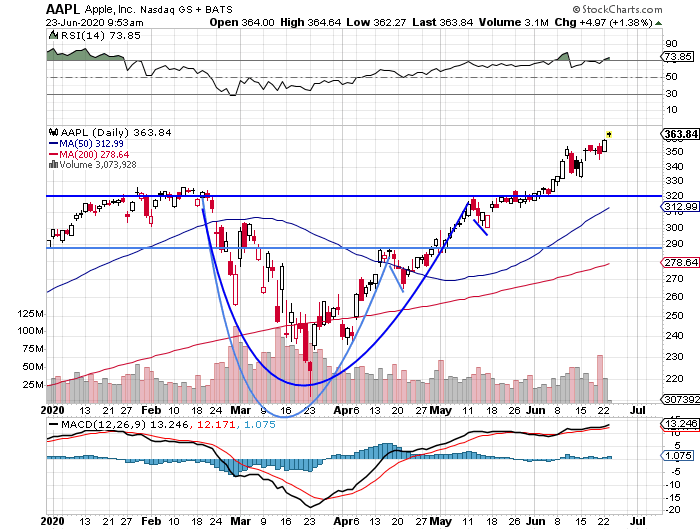 Readers will note that these shares are at least technically overbought. Both Relative Strength and the daily MACD appear extended. There appears to be a cup with two handles staring straight at us. The light blue pattern offers up a $288 pivot. That one would have placed a target in the $340's, and is the one that I reacted to with that well-placed short that I discussed on Liz Claman's show at the Fox Business Network two weeks ago. That short, even though we pulled it off because we did not dilly on the exit, was the wrong idea at that time. The dark blue pattern shows us a $320 pivot. This pivot could allow for prices as high as $385.

Apple reports on July 30th. My instinct is to get long July 31st $365 puts for a rough $16, and then write the July 31st $345 puts to the downside for about $8. Basically this trade is gambling $8 to try to win back $20. A bullish trader could just buy the shares. If going that route, I would be inclined to write a like amount of calls against that long position. Selling the July 31st $385 calls would knock almost $8 off of net basis.

Get an email alert each time I write an article for Real Money. Click the "+Follow" next to my byline to this article.
TAGS: Investing | Markets | Stocks | Technical Analysis | Trading | Software & Services | Technology | Technology Hardware & Equipment | Analyst Actions