In a column Thursday evening, Jim Cramer noted that in the banking sector Wells Fargo & Co. (WFC) is a great value with a new CEO and a 7.5% yield.  Value is not a word that is typically used by technical analysts so let's check out the charts.

In this daily bar chart of WFC, below, we can see that prices stalled in November and December and then rapidly declined from the beginning of the new year. Prices are well below the declining 50-day and 200-day moving averages. One could easily consider that prices are extended when compared to these indicators.
Early this month the 50-day moving average line crossed below the 200-day line for a bearish dead (or death) cross. This mechanical sell signal is the opposite of the bullish golden cross.
The daily On-Balance-Volume (OBV) line has been weak since the beginning of December - well before the coronavirus decline. Sellers of WFC have been more aggressive suggesting still further price weakness ahead.
The Moving Average Convergence Divergence (MACD) oscillator turned bearish in early January. All the signs were there.

In this weekly bar chart of WFC, below, we needed to go back 10 years to get a sense of how weak the chart was. Notice the large top formation going back to early 2014. The weekly close below $44 completed the pattern. Prices looked headed down to the $25-$22 area from 2010-2011.
The weekly OBV line shows a peak back in 2015. The MACD oscillator is at its lowest point in the past decade.

In this weekly close only Point and Figure chart of WFC, below, the chart shows the large distribution pattern and a possible longer-term price target of just $12. Maybe $12 is too extreme but that is what the Point and Figure "count" comes to. 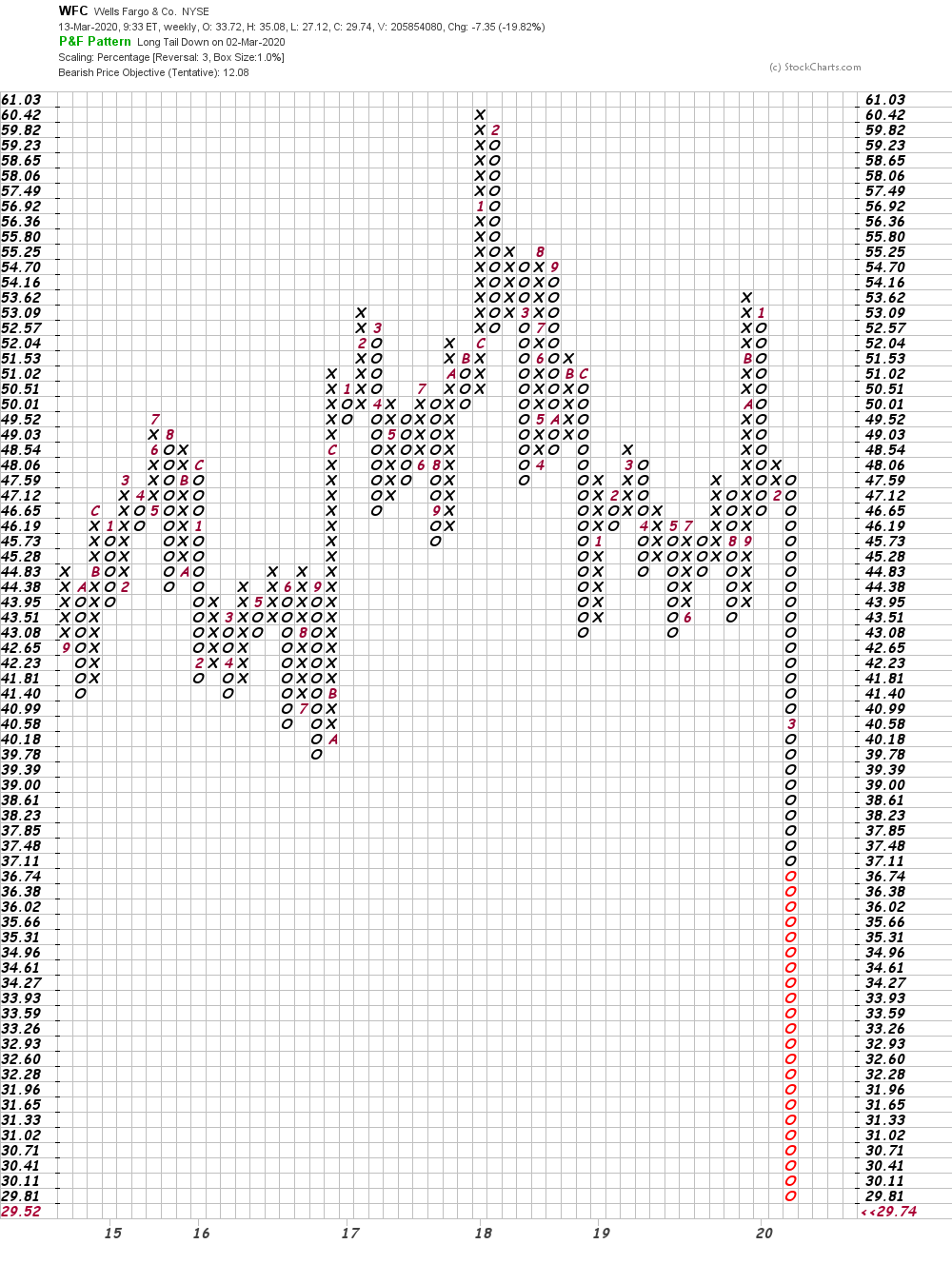 Bottom line strategy: WFC could have an oversold bounce but that does not make it attractive to a technical analyst. Chart watchers want to see a low and then hopefully a successful retest so we can judge where to suggest a sell stop. The decline in WFC started early and that should tell us something.
Get an email alert each time I write an article for Real Money. Click the "+Follow" next to my byline to this article.
TAGS: Investing | Markets | Stocks | Technical Analysis | Trading | Banking | Financial Services | Brokerages