For the three month period ended December 31st, Goldman Sachs posted GAAP EPS of $3.32, falling several miles short of consensus view, which was for something closer to $6 than $5. Net earnings came to $1.326B for the quarter, which was down 66% from the year ago comp. Revenues also missed estimates for the fourth quarter, though not quite to the same magnitude as profitability, landing at $10.593B. This was down 16.2% year over year.

While net interest income increased 16% and non-interest revenues decreased 21%, certain parts of the firm, such as trading, did outperform expectations. The severe drop-off in production at the investment bank and in asset management just proved too heavy to be fully offset. Operating expenses increased 11% to $8.091B. A testament to that condition would be the fact that the firm laid off a rough 3,200 individuals last week, with rumors spreading that another chunk that will not be overtly terminated will instead face smallish bonuses.

Chair and CEO David Solomon commented in the press release, "Against a challenging economic backdrop, we delivered double-digit returns for our shareholders in 2022. Our clear, near term focus is realizing the benefits of our strategic realignment which will strengthen our core businesses, scale our growth platforms and improve efficiency. The foundation of all our strategic efforts is our client franchise which is second to none."

I haven't seen any changes made across the community of analysts just yet this morning. I am sure that some of that is coming, For the most part though, Wall Street saw something bad coming. Still estimates were way too high. Over the past two weeks five of five sell-side analysts, all rated at either four or five stars by TipRanks, placed new or reiterated "hold" or "hold-equivalent" ratings on GS with an average target price of $355.29. I saw the stock trading with a $358 handle in early trading, down almost 4.0%.

One has to ask themselves. Does investment banking rebound in 2023? Does asset management get any easier? Does it get tougher to make money trading fixed income and currencies? If equities don't rally, strength here is a must. Goldman just declared a quarterly dividend of $2.50. which is in-line with previous quarters. The forward yield there is now 2.67%. That's a positive. The stock is inexpensive in theory at 11 times forward looking earnings, trading at just above 1.2 times book. Is it really cheap though?

We have thought GS cheap for years. While the stock rallied significantly into mid-year 2021, it has done little since. Except exhibit more volatility than its shareholders would probably like. 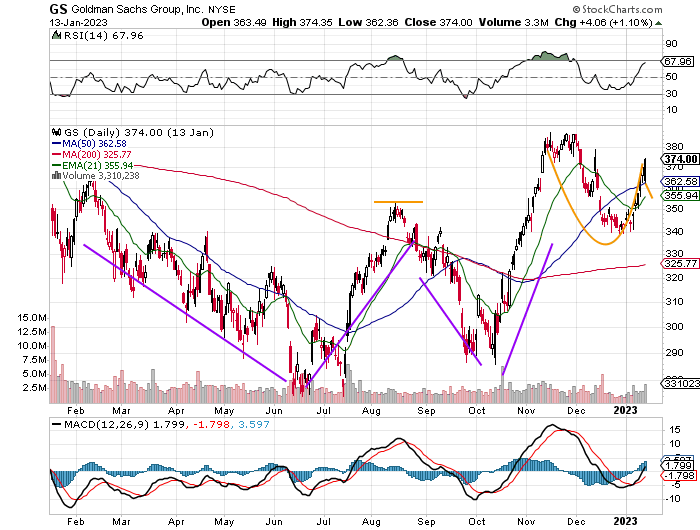 Readers will see that GS has already benefited from a double bottom reversal with a $358 pivot that broke out in November. The shares failed in the high $380's and proceeded to form a smallish cup that could add a handle today. If that is what happens, the pivot will move to the right side of the cup. That's $374.

That said, the 50 day SMA (simple moving average) looms at $362. Goldman needs to find support at that line this morning. A failure to hold there will likely unleash a bevy of portfolio managers playing by the book and looking to reduce exposure. If looking to buy this dip, I would wait to see what happens at $362. A failure there could lead to a test at the 21 day EMA (exponential moving average) ($355). Find support there and there still will be a more significant test at pivot.

I just don't think there has to be a rush to buy Goldman. My guess is that this stock sees $355 before it sees $374 again.

Get an email alert each time I write an article for Real Money. Click the "+Follow" next to my byline to this article.
TAGS: Earnings | Investing | Stocks | Technical Analysis | Trading | Banking | Financial Services | Brokerages