Kind of feels as if Apple's (AAPL) stock hasn't done anything since last summer as the shares peaked going into the 4 for 1 stock split. Basically because they haven't. Well, AAPL has bounced around a bit, but there's been a lid on the shares. Has the stock been tradable? In hindsight, sure. Still, one never knows when the shares of corporations hitting on all cylinders will just get away from oneself. Hence, Jim Cramer's "own it, don't trade it" mantra when it comes to this name. Apple reported the firm's fiscal second quarter performance on Wednesday afternoon. Finding anything to complain about is just about impossible.

For the reporting period. Apple reported GAAP EPS of $1.40, beating the street by an incredible 42 cents. Now read this next part slowly. Revenue generation printed at $89.6 billion. That's growth of 53.7% year over year, and a beat of consensus view of a rough $12.3 billion. JP Morgan points out on Wednesday morning that $12.3 billion (the size of this beat) is greater than the trailing 12 month revenue for 330 (66%) of the companies comprising the S&P 500. I think we can all pause here to say "wow" and rattle our heads for a second.

We move on. We'll have to break this down a few different ways just to get across how broad, significant, and consistent excellence is across Tim Cook's Apple. Let's talk about consumer electronics. Total product sales checked in at $72.683 billion versus expectations of $61 billion-ish. These sales were led by the iPhone at $47.938 billion with expectations in the low $40 billions. Mac sales blew the doors off of the $6.7 billion that the street was looking for, posting sales of $9.1 billion. iPad crushed projections of $5.6 billion with a $7.8 billion print. Lastly, Wearables, Home and Accessories posted a narrow beat at $7.836 billion, but they still beat. Know what my wife asked me for, for Mother's Day? An Apple Watch. I have never owned a watch worth more than $25. Yup, yup, yup, yup.

On to the Services business segment, which has been the catalyst for AAPL from a stock priced at 12 or 14 times forward looking earnings to the more than 26 times the stock now trades at. Service related sales amounted to $16.9 billion, beating the $15.5 billion consensus view, and setting new all-time records for many line items such as the App Store, advertising, Apple Music, and payment services. The key here as the Action Alerts PLUS gang pointed out in their note is that this $16.9 billion in revenue that the services biz contributes is just 18.9% of total corporate sales, but makes for more than 31% of gross income. That's a margin story. While gross margin for Apple printed at 42.5% for the quarter, which is both excellent and better than expected, broken out by segment, products ran with a gross margin of 36.1%, while services stole the show at 70.1%. Read that last number again. This is another spot where you say "wow" and rattle your pretty little head for a second.

North American sales increased 35% year over year, making North America the firm's most sluggish region in terms of growth... by far. China? Up 88%. Asia Pacific? Up 94%. Europe? 56%. Japan? 49%. You see what's going on here? Apple is taking market share everywhere, and designing their own chips to do it. You see the firm's suppliers this morning? Skyworks Solutions (SWKS) , Cirrus Logic (CRUS) , Qorvo (QRVO) , Qualcomm (QCOM) , and Broadcom (AVGO) are all popping, though Qualcomm did post earnings of their own. Operating expenses came in lower than expected, while operating cash flow landed at $24 billion, and the net cash position at quarter's end still stood at $83 billion.

This quarter reported by Apple is just home run after home run after home run. It's almost embarrassing gushing over a quarter like this. Oh, and it's not just me. So many analysts have opined since this release that I had to omit any analyst not rated at five stars by TipRanks, meaning that the analysts at Goldman Sachs, Citigroup and UBS, just don't make the cut today. Sorry guys. 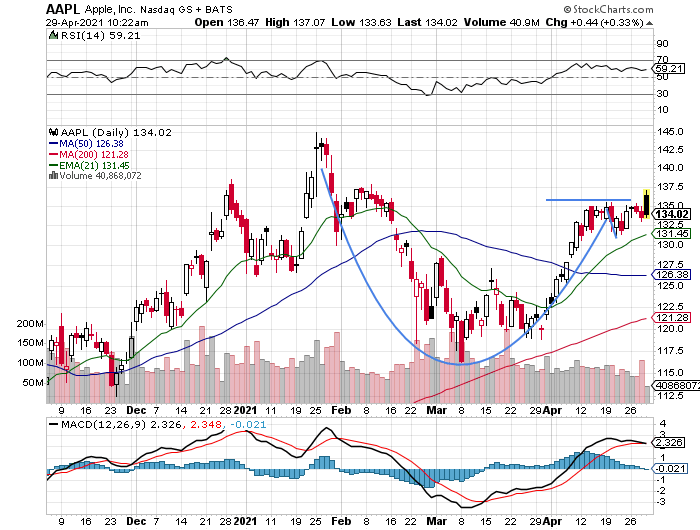 Readers will immediately see the cup with (shallow) handle pattern that AAPL is trying to break out of (and failing so far) on Thursday morning. Current support is the 22 day EMA at $131. 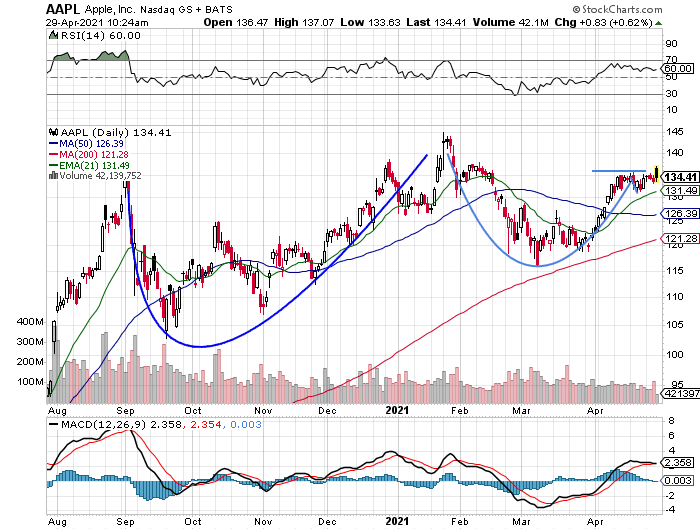 Zoom out to nine months, and the reader will see that this is the second attempt by AAPL since the split to form and break out of a cup. Does it work this time? The pivot is lower. The supporting fundamentals are... "off the charts"... get it? Okay. Basically, I like the stock, I am not selling the stock of any company performing at this level unless I need the money. Dips are to be bought. At least by me. You won't be alone.

(Apple and Broadcom are holdings in Jim Cramer's Action Alerts PLUS member club. Want to be alerted before Jim Cramer buys or sells these stocks? Learn more now.)

Get an email alert each time I write an article for Real Money. Click the "+Follow" next to my byline to this article.
TAGS: Earnings | Investing | Markets | Stocks | Technical Analysis | Trading | Semiconductors & Semiconductor Equipment | Software & Services | Technology | Technology Hardware & Equipment