General Electric (GE) has been hot of late, to say the least... in a volatile environment at that. Bear in mind that GE is in the news this morning, and that the firm's investor day is this Wednesday, March 10th. More on that in just a bit. GE last reported on January 26th which really did not turn out to be a catalyst for the stock at that time. FYI, GE will report the firm's first quarter financial performance in late April and the street expects to see year over year contractions for both the top and bottom lines.

The catalyst for the recent upward momentum for the shares of General Electric seems to be January 22nd, when Goldman Sachs analyst Joe Ritchie reaffirmed his "buy" rating on GE and increased price target from $14 to $15. Ritchie's thought circled around timelines for free cash flow. Ritchie believed at the time that GE could top consensus estimates for Q1 free cash flow and possibly reach for the higher end of the firm's own full year free cash flow projection of between $2.5 billion and $4.5 billion. That was just the start of the lovin'.

Last Wednesday, shares of GE reached levels not seen since 2018, as UBS analyst Markus Mittermaier, like his colleague at Goldman Sachs, both reiterated a "buy" rating while lifting his target price from $14 to $15. Mittermaier's thinking focuses specifically on several drivers such as potentially (as part of the Covid relief bill) being permitted to extend amortization of pension shortfalls out to 15 years from the current 7, as well aggressively reducing pension liabilities through both the freezing of palms as well as through lump sum plan buyouts. This improves not just the bottom line, but the balance sheet as well as yes... free cash flow.

Just a day later than that, Morgan Stanley's Joahua Pokrzywinski maintained an "overweight" rating while taking his target price all the way up to $17 from $13. Pokrzywinski was looking forward to this week's investor day, and thought that in particular, GE Aviation could return to profitability sooner rather than later post-Covid. Aviation would be making news sooner than that.

Word on the street, and reported by all of our favorite business news publications, is that General Electric is close to a $30 billion (give or take) deal to combine the firm's aircraft leasing business known as GE Capital Aviation Services, or GECAS for short (the largest remaining unit within GE Capital), with Irish aircraft leasing business AerCap Holdings (AER) . AerCap comes to the table with a market cap of almost $6.6 billion, but an enterprise value of more than $34 billion when adjusted for cash and debt according to S&P Capital IQ, which I in turn found in the Wall Street Journal.

Obviously, this has been a suppressed business throughout the pandemic as many airlines have placed as many aircraft in storage as they have in the skies. Remember, GE took a $500 million write down on this business last quarter. Still, GE or GECAS, brings more than 1,600 owned or on order aircraft to their side of the table, leasing jets manufactured by both Boeing (BA) and Airbus (EADSF) for both passenger and cargo purposes as well as smaller, regional jets. AerCap itself brings about 1,400 aircraft either owned or on order.

Obviously not enough is known about this potential deal or if it will even happen. Does this become a merged new firm spun out from the parent? Is this something of an acquisition? I don't know how much that would help.

Shares of AerCap are up 8% this morning, while GE stock is up a more pedestrian 2.7%. Good for both sides? If it reduces overhead as the industry recovers. Good for GE? If it helps the balance sheet. CEO Larry Culp has been anything if not aggressive in simplifying not just the firm's myriad of confusing businesses, but its focus. Don't forget, Culp sold off the biotech business to his old firm, Danaher (DHR) for a cool $21 billion last year, while also selling off the firm's majority stake in Baker Hughes (BKR) , while working on reducing overhead as well as remaining obligations that have slowed the firm's resurrection coming out of the disastrous Jeff Immelt era. 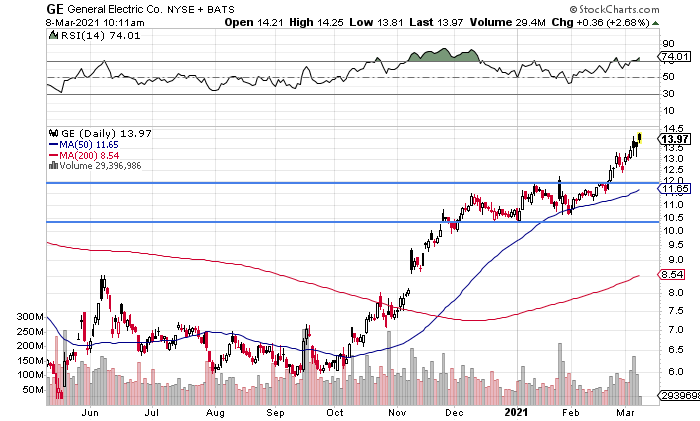 Readers will note the basing period of consolidation that formed from late November through late February. The pivot there would be $12 and the breakout by my math would bring with it a target price of $14.40, based on a 20% move off of pivot. A 25% move, which is still within the trading parameters that I often preach, would give this model a target of precisely $15 putting us spot on with both Goldman Sachs and UBS. I can live with that.

I also want readers to notice this. I have been reading that GE is overbought, and technically it is. Check this out. Not only has GE run with a relative strength index reading above 70 (often used to signify an overbought condition) for roughly six weeks late last Autumn, as well as for a couple of days in mid-February. In either case did the condition provoke a sell-off. The prolonged overbought reading of last November/December built out the basing pattern which was very healthy, while the stock just ran over the reading in mid-February. I will not be adding up here, but in no way am I ready to sell any.

Optionally Speaking.... an investor with a long position of at least 100 shares of GE stock might find interesting the June $15 calls that at last glance paid as much as $1.03. Even if called away at $15, it would be like selling the shares at $16.03.

Get an email alert each time I write an article for Real Money. Click the "+Follow" next to my byline to this article.
TAGS: Earnings | Investing | Options | Stocks | Technical Analysis | Trading | Industrials