While the top line print just met consensus view (and was good enough for y/y growth of 17.7%), the bottom line number fell short of expectations. Those revenues that grew 17.7% would have grown 23% in constant currency. It becomes rapidly apparent that the strong dollar had a significantly negative impact on these earnings and you will see that through the balance of this piece. Adjustments to GAAP profitability were primarily made for the amortization of intangible assets as well as for stock based compensation.

Cloud Services and License Support revenue increased 14% (20% in constant currency) to $8.417B, as the percentage of total revenue driven by this unit dropped from 76% to 73%.

Cloud License and On-Premise License revenue increased 11% (19% in constant currency) to $904M, as the percentage of revenue driven by this unit remained steady at 8%.

Hardware revenue printed flat (+5% in constant currency) at $763M, as the percentage of total revenue driven by this unit dropped from 8% to 7%.

Services revenue increased 74% (84% in constant currency) to $1.361B, as the percentage of total revenue driven by this unit increased from 8% to 12%.

Oracle expects to see adjusted EPS of $1.16 to $1.20 on revenue growth of 15% to 17% for the current quarter. This is below consensus on both fronts. The firm also expects to have a negative 5% to 6% impact to revenue from exchange rates. This may also hit expected EPS by as much as seven cents.

The firm ended the quarter with a net cash position of $11.22B, nearly cut in half from three months ago (Cerner acquisition), while current assets dropped more than $10B to $21.004B. Current liabilities amount to $34.819B, up from $19.511B over three months ago as current notes payable and borrowings ($16.097B) skyrocketed. This places Oracle's current ratio at a paltry 0.6.

Total assets add up to $130.309B, including $74.128B in "goodwill" and other intangibles. Obviously, I have trouble with a balance sheet where intangibles comprise 57% of total assets. Total liabilities less equity (which is a deficit in this case) comes to $135.758B. This includes $75.48B in notes payable and other borrowings not considered to be current. Add the long and shorter-term debt and you have $91.577B.

There is absolutely no way that I can feel good about buying the stock of a corporation with a balance sheet like this.

I have found eight sell-side analysts that are both rated at a minimum of four stars by TipRanks and also opined on ORCL since these earnings were released. After allowing for changes made, we have among the eight, four "buy" or buy-equivalent ratings, three "hold" or hold-equivalent ratings, and one "underweight", which is sell-equivalent.

One of the "holds" declined to offer up a target price. The average target price across the other seven analysts is $95.57 with a high of $115 (Philip Winslow of Credit Suisse) and low of $70 (Brent Bracelin of Piper Sandler). When omitting the high and the low as outliers, the average of the other five moves up to $96.80.

Obviously, there is some organic growth. Cerner was a big chunk and could very well turn out to be a real producer. To hear founder, chairman, and chief technology officer Larry Ellison speak, he thinks Oracle will start taking share away from other cloud providers very soon. Then there is the share repurchase program, which is aggressive, and supported by free cash flow that over four trailing quarters, has grown 9%. Those are reasons to stick around for shareholders.

Then I get to the balance sheet, which I do not like. That makes it tough for me to initiate anything on the long side. 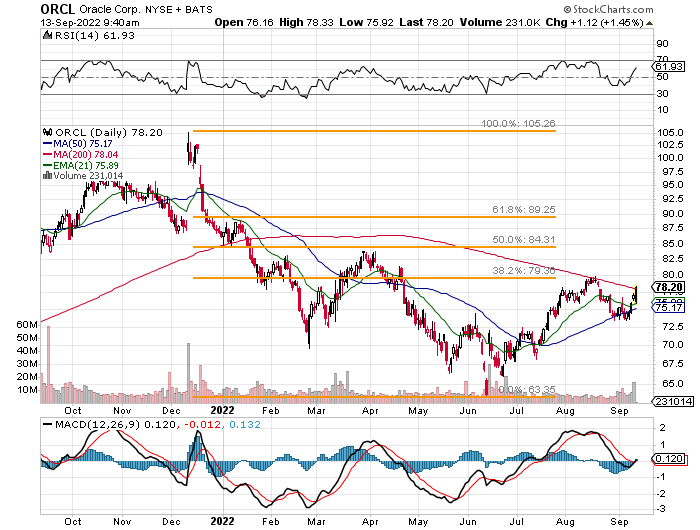 Wall Street appears to like last night's report, even as the broader market sells off. I'll tell you what. ORCL is bumping up against potential resistance at its own 200 day SMA ($78.04) and a 38.2% Fibonacci retracement of the December through June selloff ($79.36). If ORCL can take and hold both of those levels in this now much tougher (after the August CPI hit the tape) projected monetary environment, then I will be convinced.

For now, for cloud services, my opinion is that AWS and Azure are better bets. The disclosure below displays this opinion.

(MSFT and AMZN are holdings in the Action Alerts PLUS member club. Want to be alerted before AAP buys or sells these stocks? Learn more now.)

Get an email alert each time I write an article for Real Money. Click the "+Follow" next to my byline to this article.
TAGS: FOREX | Investing | Stocks | Technical Analysis | Trading | Software & Services | Technology | Earnings