For me, Pfizer (PFE) is one of those names that once you buy, you may never sell. Because it's such a good name to hold? Hmm... yes and no. The real answer is in consistency. There are much better names for traders looking for beta. There are very few names that can spend a long time on one's book, while never hitting either a target price nor a panic point. Pfizer is one of those names. Why don't we just give up? No reason. Especially if the firm pays you $1.56 a year per share, or 4.36% just to hang around. 4.36% might not seem like a lot, but it beats your losers, and it sure beats the bank.

For the firm's fourth quarter, Pfizer reported adjusted EPS of $0.42. That missed Wall Street's projections by a nickel. GAAP EPS came to just $0.10. Revenues landed at $11.68 billion, up 11.8% year over year, and a solid beat of expectations as well. It was during this period that Pfizer completed the deal spinning off the Upjohn business unit in combination with Mylan to form what is now Viatris (VTRS) . Pfizer has been moving toward focusing on core businesses for several years now.

Oncology is Pfizer's largest business, featuring such drugs as Ibrnace for the treatment of breast cancer, and Vyndaqel which is a heart medication. The unit experienced 23% sales growth, contributing $3.024 billion in sales to the whole. Other units experiencing significant growth were Vaccines for obvious reasons... at +17% to $2.001 billion, and Rare Disease. That unit grew 26% to $865 million. More stagnant, but still large contributing business units include Internal Medicine at $2.308 billion (+1%), Hospital at $2.22 billion (+8%), and Inflammation & Immunology at $1.267 billion (+1%).

As for the BNT 162b2 vaccine that was developed alongside German biotech BioNTech (BNTX) to combat the SARS-Cov-2 virus that causes Covid-19, Q4 sales amounted to $154 million which boosted overall performance for the Vaccines unit. The firm expects to sell roughly $15 billion worth of this vaccine this year and has increased forward looking guidance accordingly.

Adjusted net income increased 15% for the quarter to $2.366 billion. Backing out of the adjustment, net income improved to $594 million from an outright loss for Q4 2019.

On a positive note, a study conducted by the firm showed that the more contagious strains of Covid-19 that have been first identified in the UK and in South Africa, showed only a small impact on the effectiveness of this Pfizer vaccine. Moderna (MRNA) showed somewhat similar results. This appears to be a bit better than what we have heard from some other vaccine developers. I do not know if this is an advantage of messenger RNA technology over other vaccine development technologies or not, but certainly bears watching.

Pfizer is already working on a "booster" shot to protect against new variants of SARS-Cov-2 as they arise, as is Moderna. 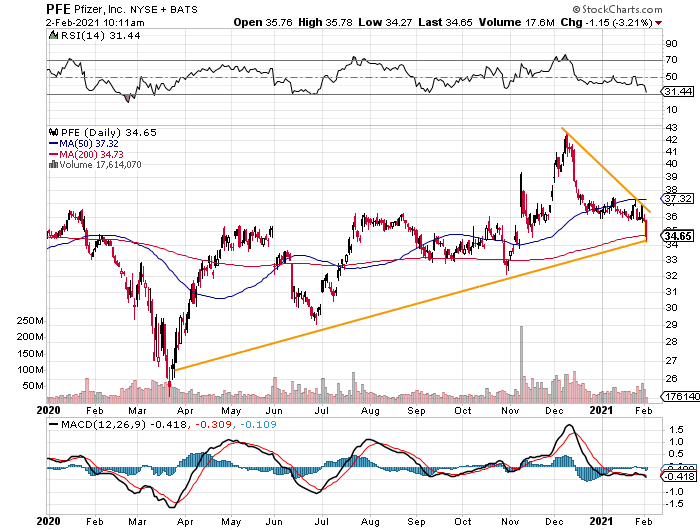 What we see here, I think, is a closing pennant or flag, but it's not clean. The lower trend line can be drawn all the way back to last spring's market collapse. The upper trend line has been a sharp decline of less than two months. I would expect this to produce some increased volatility. Given that the shares are very close to being technically oversold, my feeling is that the general direction upon the closing of this pennant will be in a northerly direction, but keep in mind that I am long the shares and potentially biased.

What we look for now is for the shares to retake and hold that 200 day line at $34.73. For me, this is an add at these prices. Once this piece is published, I expect to add to my long. My panic point is the $32 low of late October. My target remains for now unchanged at $48. Unless these shares trade either that low, or that high, I see no reason to make a sale. My net basis is just above the $33 level.

Get an email alert each time I write an article for Real Money. Click the "+Follow" next to my byline to this article.
TAGS: Drug Approvals | Earnings | Investing | Markets | Stocks | Technical Analysis | Trading | Healthcare | Pharmaceuticals | Coronavirus