I'm told that "they" say... Once is an accident, twice is a coincidence, but three times, that's a trend. Well, Target Corp (TGT) released its third quarter financial results on Wednesday morning and for the third time in a row, the retail chain put together a lousy quarter.

In full disclosure, I did get long a small position in TGT on Tuesday morning in hopes of seeing along the lines of what Walmart had posted. I sold those shares early this morning after Target released their numbers, but before being asked to cover TGT earnings for Real Money. Not, however, before losing some dough. At least it was just a trade, and not an investment sized position.

For the three month period ending October 29th, Target posted GAAP EPS of $1.54, which was down 49.1% from $3.03 for Q3 2021, on revenue of $26.518B. The earnings print fell a couple of country miles short of consensus view, while the revenue print was good enough for year over year growth of 3.4% and also good enough to beat Wall Street. Comparable sales increased 2.7%, on top of 1.7% the prior year.

This comp sales growth was driven by a 1.4% increase in traffic that produced an average ticket that grew 1.3%. Comp store sales increased 2.7% as comp digital sales increased 0.3%. 0.3%! Talk about poor corporate execution... readers might remember that on Tuesday, Walmart posted 16% growth in e-commerce.

The quarter produced an operating margin rate of 3.9%, that while an improvement over the prior quarter, fell well short of what Wall Street was looking for. Readers may recall that in the Q2 press release, Target had guided operating margin toward "a range around 6% in the back half of the year."

However, total current assets here are largely inventories and valuing inventories in this environment is very difficult. Sans inventories which we would not do to a retailer in a normal environment, brings the firm's quick ratio to 0.14. This, to be polite, is sub-optimal.

Total assets amount to $55.615B. The firm, to its credit, did not make any entries for intangible assets. Total liabilities less equity come to $44.596B, including long-term debt of $14.783B. Obviously, this balance sheet has issues. For one, cash on hand covers only about 43% of short-term debt. Never mind longer-term debt. Cash needs to be built back to a level several times higher than this. Inventories are going to be a drag on margin and on the firm's key ratios for probably still several quarters henceforth.

Target now sees a low-single digit decline in comparable sales for the current quarter. The firm also plans for an operating margin rate centered around 3%. This is the item that the firm saw at close to 6% a quarter ago and would be down from 8.4% for the similar quarter a year ago.

It's difficult to see a reason for optimism in much of this. The execution has been poor. Inventory management has been poor. The firm's guidance has been way off, and is poor. Margins are way down. Cash on hand has dwindled. Free cash flow has gone from decisively positive to decisively negative. Do I need to go on?

Oh, one more thing... Target says that shoplifting is up 50% this year, and has cost the frim a rough $400M in profit year to date. That seems more than a little high to me. It's certainly worth trying to find a solution.

The worst of it all is that Walmart, the firm's chief rival that also came in after two tough quarters, has also badly mismanaged inventory levels, and also runs with a balance sheet envied by no one... somehow managed to have a good quarter. What does that say about Target? What does that say about CEO Brian Cornell? Cornell has such a strong reputation as a manager. Well, that rep has been all used up. It's long past time to prove it. The competition figured it out.

I saw the plan to save $2B to $3B in expenses over the next three years. If they execute well, it's a start. For Target, solid execution seems like a big ask. 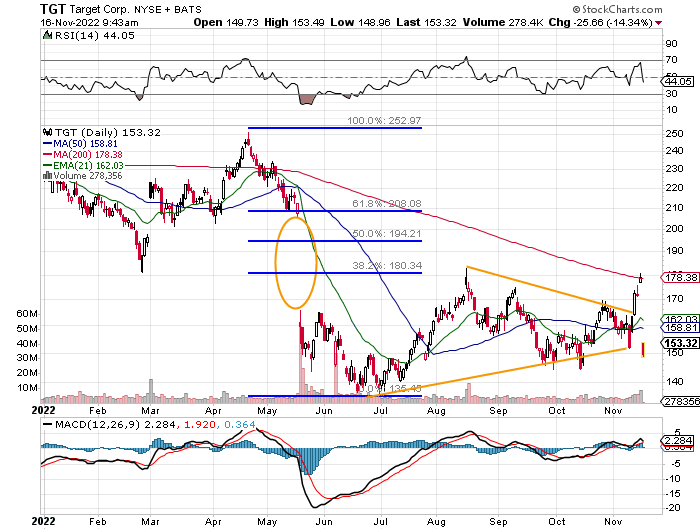 The stock will now have been rejected at its 200 day SMA as well as at a 38.2% Fibonacci retracement of the April into July selloff (twice). TGT has already surrendered its 50 day SMA and 21 day EMA on Wednesday morning. The unfilled gap created in May remains mostly unfilled.

The stock will be volatile. I will be avoiding TGT equity as if it were the plague. That said, a trader might get away with getting long a $5 wide strangle expiring this Friday if it can be had for $4-ish or less and had as soon as this morning.

- Stock is moving. Prices and strikes will be different.