On Thursday evening, DocuSign (DOCU) , a darling of the pandemic economy, released the first first quarter financial results. For the three month period ended April 30th, DocuSign posted adjusted EPS of $0.38 (GAAP EPS: $-0.14) on revenue of $588.69M. The sales number was good enough for annual growth of 25.5%, and did beat Wall Street. The bottom line print, however... fell short of expectations and compares poorly to the year ago comp of $0.44 adjusted, $0.04 GAAP.

If you're like me, you are probably looking at this quarter and thinking that it does not look so bad. The stock has been simply smashified overnight. For those wondering, the adjustments made, that add up to $0.52 per share, are derived from numerous sources. However, the dominant adjustment was made for stock based compensation. Let's explore.

The forward guidance was a little tough, which is primarily why overnight sellers piled in.

I can find 10 sell-side analysts who are rated at either four or five stars by TipRanks and have opined on DOCU since this release last night. There are a couple of downgrades and several slashed target prices. This is the aggregate after adjusting for those changes. Of the 10, there are two who rate DOCU as a "buy" or buy equivalent. There is one "sell" rating, that's Dan Ives at Wedbush. There are also seven "hold" ratings or hold equivalents.

One of the holds, Scott Berg at Needham did not set a target price. The average target price of the other nine analysts is $80.50, with a high of $151 (Patrick Walravens of JMP Securities) and a low of $50 (Ives). Omitting the high and low, the average of the other six is $73.83. 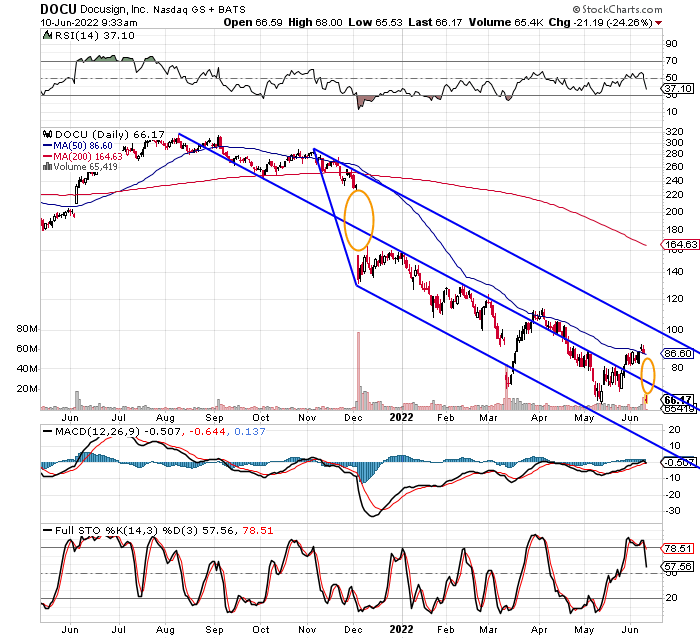 The trend is as plain as the nose on your face. The stock traded at a high of $314.76 last August, and has done nothing but head lower since, leaving an unfilled gap between $227 and $159, and now another gap this morning. The shares had recaptured their 50 day SMA this week, and that had drawn several indicators toward neutral if not almost short-term overbought readings.

With this morning's beating, these indicators have moved back toward neutral, but not nearly oversold, meaning that there is room to run.. to the downside. Incredibly, DOCU now trades almost $100 below its 200 day SMA. Buy the dip? Hasn't worked so far with this falling knife.

My instinct says to stay away. If I were drawn to DocuSign like a moth to a lethal flame, I would rather sell September $55 puts for $5.50 than get long the equity today. At least that way, the trader takes in $550 in revenue per contract and if the trader does get run over in September, you're talking about a net basis of $49.50 rather than something in the mid to high $60's.