Finally. What was that? Around 09:15 am ET. Surprised Carnival Corp (CCL)  didn't wait until after the opening bell. One would immediately think that maybe the firm released their numbers so close to the opening bell in New York in order to try to fly under the radar as most traders, especially sales traders, are exceptionally busy during the last 30 minutes ahead of the opening of the regular trading session. Carnival did lose a lot of money, much more than anticipated. That said, there are positives and the market, at least in the early going... appears to be focusing on those. Let's explore.

For the firm's second quarter, Carnival posted GAAP EPS of a loss of $1.61 per share on revenue of $2.401B. These top and bottom line numbers fell short of consensus view by significant margins. That said, the sales number was up 47.9% sequentially. There is no useful year over year comparison as this is the May quarter, and the ships still were not sailing in May of 2021. GAAP Net loss amounted to $1.8B. Adjusted net loss reached $1.9B. Adjusted EBITDA came to $-900M. Revenue per PCD (Passenger Cruise Day) decreased "slightly" from a 2019 comparison.

So, Why Was The Kneejerk... Higher?

There are a number of positive takeaways despite the massive cash burn...

2) Q2 ended with $7.5B in liquidity, including cash, short-term investments, and available borrowing under the company's revolving credit facility.

The press release actually provides very little in the way of balance sheet detail. What it does tell us is that Carnival ended the quarter with $7.205B in net cash, down from $9.139B six months ago, and that total debt (long-term and current) amounts to $35.135B, up from $33.226B six months back. Customer deposits add up to $5.08B, up from $3.508B over that same time frame.

Obviously, this is a business that was put in a tough spot by the pandemic. Now, just starting to tiptoe toward where it was prior to 2020, food and fuel prices soar and both the US and global economies threaten to go into recession. Not the best environment for a business that one would consider to be a bit pricey for middle class consumers to begin with, to have to be in. It's not that I am not a fan. It's that I don't see a clear path. 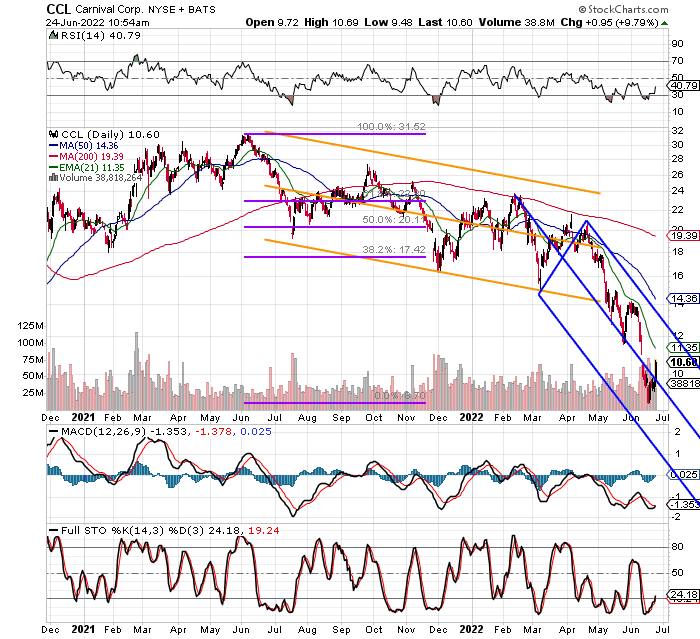 Readers will see that CCL was already mired in a downward trend from June 2021 through April 2022 when the pace of the pressure on the stock accelerated. The stock, even with this morning's rally, remains centered within the blue Pitchfork model, even though this model appears to be sloped in an unsustainable manner.

The key test, in the short-term will come at the 21 day EMA (currently $11.35). That line will, in my opinion, either propel the stock like a slingshot, or repel the stock, and put an end to this rally.

I can not purchase an equity stake in a business with fundamentals or lack thereof, like these, except in speculation. Hence, I would prefer to sell September $10 puts for a rough $1.35 than pay up for this stock on an "up" day. This exposes the investor to equity risk at a net $8.65 in three months' time. That same trader, if there was some kind of fear of missing out, could then get long September $10 calls for about $1.95. This way, the investor is favorably exposed to the upside for a mere net debit of $0.60.

Get an email alert each time I write an article for Real Money. Click the "+Follow" next to my byline to this article.
TAGS: Earnings | Investing | Stocks | Technical Analysis | Trading | Resorts and Hotels | Consumer Discretionary