M'm! M'm! Good! Campbell Soup (CPB) may have long ago put aside the firm's marketing slogan of yesteryear. That said, even with a revenue miss for the quarter reported on Wednesday morning, there is perhaps enough there to bring back such a nostalgic and in my immature mind, a simply fun advertising jingle.

Funny, not so funny story. On Monday, I had a can of my favorite Campbell Soup for lunch. FYI, it's the low-sodium (don't ask) Chicken Corn Chowder of the Chunky variety. The stuff is awesome, unless you try the regular version. So, if you are cutting back on salt, don't do that. Anyway, I actually had the thought upon sitting down to that lunch that I should not be using supplies from my pantry as grocery shopping in the New York metropolitan, while better than it was, can in no way yet be considered normalized.

That said, Tuesday afternoon... I geared up, and made a grocery run for the family. Where are we in New York almost three months after the shelves were emptied in a state of mass panic? Still a lot of under-stocked shelves. They had toilet paper, which was a first. Canned goods? Still at minimal levels. They had limited supply of Campbell Soup cans. None of the low-sodium variety. They had pasta, but not a ton of it. The breakfast cereal aisle was stocked. That was nice. Overall, the store was in much better shape than it had been of late. Still not close to pre-Covid-19 levels. This particular grocer is part of a national chain. Think Covid returns seasonally? Keep those pantries from running below certain levels.

For the firm's fiscal third quarter, Campbell Soup reported adjusted EPS of $0.83. that was a beat. Revenue of $2.24 billion came in a little light versus expectations, but still at annual growth of 14.9%. This is the best the firm has done in terms of accelerating sales growth in four quarters.

In terms of organic sales growth, overall the number was excellent at 17%. As folks hunkered down in place, the meals and beverages business line produced growth of 21%. That line itself was led by a simply astounding 35% print for growth in canned soups and broths. Trust me, if the stuff was in stock, it would have been higher. The firm's snacks business that includes Goldfish, Pepperidge Farms, Kettle Brands, Cape Cod, Pop Secret, and Snyder's of Hanover enjoyed growth of 9%.

Gross margin for the period increased for the entire firm to 34.7%, as they made improvements to the productivity of it's own supply chain while taking action to control expenses. Operating margin "exploded" to 17.2% versus expectations of 15.9%. CEO Mark Clouse acknowledged "unprecedented broad-based demand across our brands as consumers sought food that delivered comfort, quality, and value."

Peering into the future, Campbell Soup now guides full year revenue to growth of 5.5% to 6.5% versus prior guidance of -1% to +1%. The firm now sees full year EPS of $2.87 to $2.92. This is up significantly from the $2.55 to $2.60 that the firm had been looking for pre-crisis, however keep in mind that Wall Street's consensus had already been ratcheted up to $2.89, so this is not an upside shock that needs to be priced in.

The shares had been trading higher overnight, but now were trading lower. If one were inclined to invest in Campbell Soup, this may present opportunity. I have been long a number of pantry names throughout the crisis. My long positions across this group have all lent stability, upside and last but not least dividend payments to my portfolio. Conagra (CAG) has been spectacular. Even Kraft Heinz (KHC) has performed. My laggard has been PepsiCo (PEP) , and even that name has been positive. Campbell Soup has been one that I have swung on and missed on a number of occasions, as it has been more volatile than the rest of the pack, and when I miss, I do not chase. Just my way. Still would not mind owning the shares, and the shares do yield 2.7%. 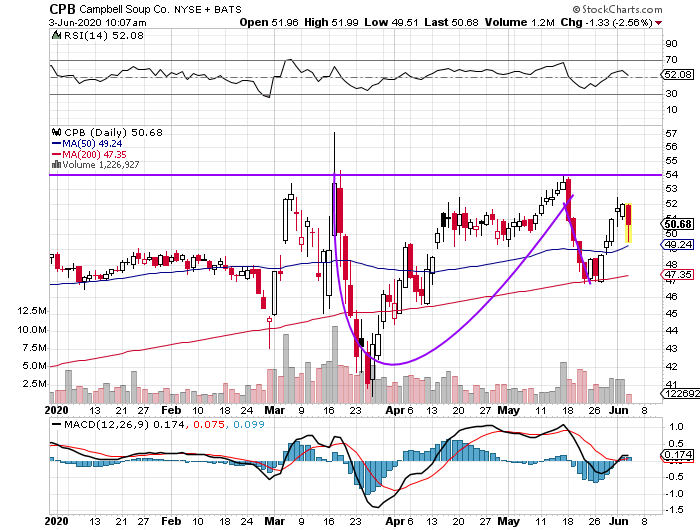 Readers will note that the shares appear to have failed this morning on approaching a $54 pivot created by a pandemic induced cup with handle pattern. The shares did approach their own 50 day SMA of $49.24 just after the opening. Just thinking that this would be a lovely point of entry. In fact, I think it's so lovely that after I see this piece hit publication, I am going to bid that price for an entry level (1/8) sized position. FYI... if I do get hit, I will be writing a June 19th $51 calls against the position if I can still get more than a buck for those.

Get an email alert each time I write an article for Real Money. Click the "+Follow" next to my byline to this article.
TAGS: Dividends | Earnings | Economy | Investing | Options | Stocks | Technical Analysis | Trading | Food & Staples Retail | Coronavirus