This morning, in Market Recon, we touched on "Complexity Theory" and the potential for unknown impact as systems either adapt or compete in order to gain or maintain access to resources. Of course two complex systems now under the microscope among others would be in finance and in healthcare. As one zooms out, we see that both are further intertwined with political, social, and transportation networks to varying degrees at local, regional, national and global levels.

On that note, several key banking executives will meet with President Trump this afternoon at the White House in the cabinet room. What will be discussed among many items will be thoughts or estimates on how long or how deep the spreading Covid-19 virus will impact the U.S. economy and subordinately... financial markets. There will also have to be discussion regarding protection or relief for U.S. consumers, as well as small- to medium-sized businesses.

Readers note that I have for weeks now considered the banks to be uninvestable. That thought came from the place of a collapsing Treasury yield curve. That's not to say that in the year 2020 that the banks, especially the larger, national banks do not have a bevy of ways to drive revenue, they do. It's that the markets still consider net interest margin when applying valuation metrics to the banking space, deserved or not. Getting out of the entire space was an investment decision. I still have bank accounts and I do not think the industry is in imminent danger. Let's not forget that at least on the trading side, the bigger banks can do very well in extremely volatile markets even if not appreciated when valued. My thought has always been that JP Morgan (JPM) is the "best in class" bank and when I do indeed reenter the arena, I would lead with that name.

We'll only go back a week. March 4th. That's the day that we learned via the Financial Times that large banks including Goldman Sachs (GS) , JP Morgan, Citigroup (C) , and Morgan Stanley (MS) had been testing disaster recovery sites in both the U.S. and the UK. The banks were working on continuity plans, seeking to spread out staffing as the coronavirus spread just in case an area was to be quarantined. This came one day after the FOMC had made an emergency 50 basis point reduction to the Fed Funds Rate target in between policy meetings, which is a rare event.

One day later JP Morgan CEO Jamie Dimon would end up in emergency heart surgery, and leave the firm temporarily in the control of co-Presidents Daniel Pinto and Gordon Smith. Dimon's surgery went well, by the way, and is reported to be recovering well.

By the following Monday, there would be an oil shock in addition to both a supply and a demand shock. All three of these "shocks" have started to add up to a financial shock. The banks, of course, have exposure to the U.S. shale oil patch, as many firms across that space rely upon access to liquid debt markets in order to sustain operations, and service that debt through the sale of their liquid commodity that now trades for a far lower price.

What banks are the most exposed to the oil patch? If you listened to Odeon Capital's Dick Bove this past Monday, it's not just the regionals. Bove claims that Bank of America (BAC) , Citigroup, JP Morgan, and Wells Fargo (WFC) could all have a problem. Among regionals, Bove named US Bancorp (USB) , PNC Financial (PNC) , Comerica (CMA) , KeyCorp (KEY) , and Regions Financial (RF) . That leads us to this afternoon's meeting in Washington. Gordon Smith will represent JP Morgan today. 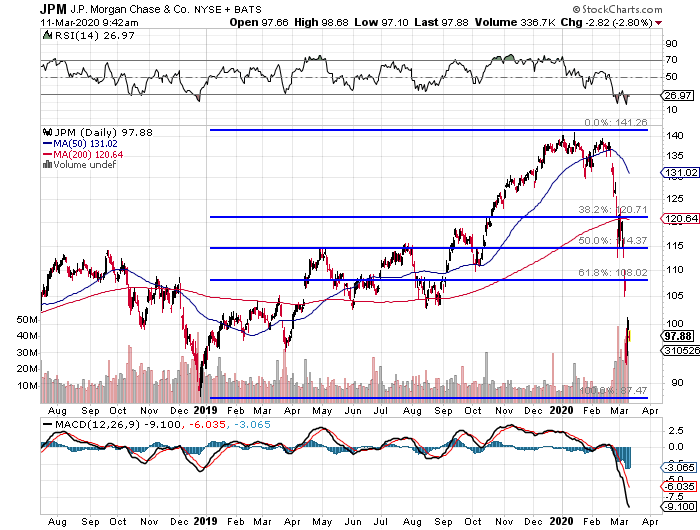 One quickly sees that by any normal standard that shares of JPM have become badly oversold by any technical measure including Relative Strength. The daily MACD looks like something out of a monster movie. A falling knife? Certainly. Does one try to catch a falling knife? One might try, but doing so intelligently is difficult.

While I am not willing to stick my neck out right now and take an equity stake, perhaps there is a worthy options play to be had. Am I willing to expose myself to equity risk at what appears to be a discount and get paid to take that risk. That is the question. Let's explore.

A trader could (in minimal lots):

- Sit on one's hands. The only way to completely avoid risk, and there's nothing wrong with that. Know your risk tolerance.

Get an email alert each time I write an article for Real Money. Click the "+Follow" next to my byline to this article.
TAGS: Investing | Markets | Options | Stocks | Technical Analysis | Trading | Banking | Financial Services | Stock of the Day