Following the Dow and its additions and subtractions is akin to Facebook (FB) stalking your significant other from the tenth grade. Maybe you have a few moments of nostalgia, but the importance and notice of what you see now fades quickly. That's how it will be in a week or two from now with Pfizer (PFE) , Exxon Mobil (XOM) , and Raytheon (RTX) . Heck, Raytheon was in for such a short time some may not even realize it has come and gone.

I haven't done enough digging into whether leaving the Dow is a blessing and being added a curse, so I won't opine on the ousters should be added or the newcomers sold, but this move may give Pfizer the catalyst it needs to make a big move one way or the other.

The stock has been consolidating for weeks now. We have multiple patterns and indicators suggesting volatility is on the horizon, so straddle and strangle players may want to give this one consideration for an October, or possibly even a September, expiration. If we examine the weekly chart, we see a strong W-shaped price pattern with the right low being higher than the left low. This is often indicative of a strong, bullish setup. The stock demonstrates more of a double-top rather than a triple top as the middle of the W fell short of the current resistance line. 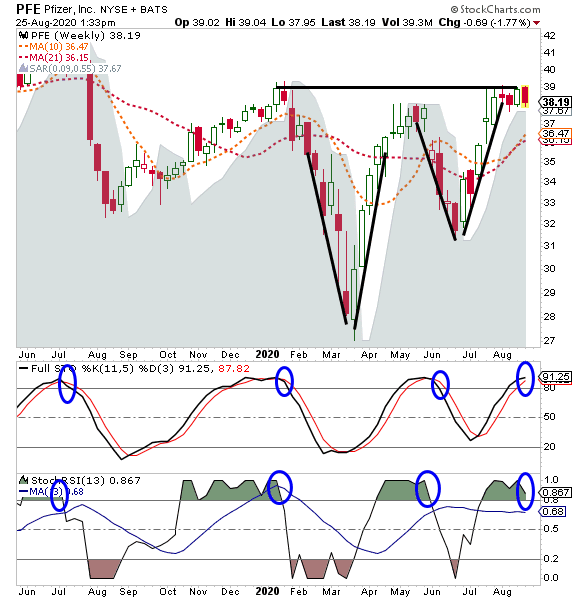 Although the price pattern is strong, there are some concerns with the underlying indicators. The Full Stochastics indicator has hit an overbought position. The good news is overbought can remain overbought, but when this has turned over (bearish crossover), Pfizer stock has fallen hard. The same is true with the Stochastics RSI as well as the parabolic stop-and-reverse (PSAR). The good news is NONE of these have yet triggered bearish, but investors and traders should keep a very close eye on the setup.

A weekly close above $39.50 should send Pfizer into breakout mode into the $44-$45 range within two months. Unfortunately, if those secondary indicators fail and rollover, I would expect a drop in the 10% to 15% range, so certainly not a small pullback, and one that could trap Pfizer in the $30s well into 2021.

We know getting dropped from the Dow isn't the kiss of death. The index is not nearly as active as the S&P 500 or the Nasdaq 100 in terms of underlying ETFs, hedges, or even basic allocation. Among many traders, it's a running joke of an index and what it represents. That being said, the headlines will likely be enough to draw extra trader scrutiny over the next few weeks. This extra attention should be enough of a catalyst to put the bullish or bearish outcome into play. In other words, I believe a trader could either take a long volatility position, like buying an October $38 straddle, now, or wait for one of the breakouts to trigger, then play the stock either higher or lower (depending on the breakout).

Either way, there's a play to be had now or one I believe coming soon. Keep Pfizer on your list as a somewhat of a sleep stock that may be about to become very interesting.

Get an email alert each time I write an article for Real Money. Click the "+Follow" next to my byline to this article.
TAGS: Investing | Markets | Stocks | Technical Analysis | Trading | Healthcare

Intuitive Surgical Has Broken Down From a Triple Top Formation

It pays a healthy dividend and it could benefit from a low orange harvest in Florida, which could drive up citrus prices.

Here's Why Netflix Is a Trader Now, Not an Investment

NFLX is growing, but it's not a 'growth' stock and had been priced like one. That's over.