On Tuesday evening, CrowdStrike Holdings (CRWD) released the firm's second quarter financial results. CrowdStrike had a nice quarter. For the three months ended July 31st, the firm posted adjusted EPS of $0.36 (GAAP EPS: $-0.21) on revenue of $535.153M. CrowdStrike beat Wall Street on both the top and bottom lines, while revenue generation increased 58.5% year over year. Of the $0.57 per share worth of adjustments, $0.55 was made for stock-based compensation purposes.

CrowdStrike ended the quarter with ARR of $2.14B (+59%), after achieving record net new ARR of $218M for the period with accelerating year over year growth. The firm added 1,741 net new subscribers, which is also a record, while subscription revenue increased 60% year over year to $506.199M. Professional Services increased 32.5% to $28.954M. GAAP subscription gross margin was 76%, same as the year ago comp.

CrowdStrike ended the quarter with a net cash position of $2.319B, and current assets of $2.976B, both numbers significantly elevated from six months ago. Current liabilities come to $1.649B (also up, but less so), leaving the firm with a current ratio of 1.41. That's healthy.

This balance sheet is in very good condition. The firm can meet all of its medium term obligations, while still able to, if necessary, pay off its debt-load more than three times over out of pocket. We like that.

I have noticed nine sell-side analysts that both rate either four or five stars at TipRanks and have opined on CRWD since these earnings were released last night. It just so happens that all nine of these analysts rate five stars. After allowing for any changes that have been made, all nine rate CRWD as a "buy" or their firm's buy equivalent.

The average target price across the nine is $230, with a high of $245 (Fatima Boolani of Citigroup) and a low of $220 (Shaul Eyal of Cowen). Omitting the high and the low as outliers (though this is a pretty tight range) brings the average of the other seven analysts to $229.29.

There's a lot to like here. Strong growth. Strong balance sheet. No hint of either a slowdown or price sensitivity. Among other elite level cybersecurity businesses, Palo Alto Networks (PANW) also reported a very strong quarter, while Zscaler (ZS) reports next week. My thinking is that even in this horrible environment for tech, that my portfolio probably does need some permanent exposure to cybersecurity. I have often relied upon ZS for that exposure and have even traded that name recently.

All that said, cybersecurity stocks are expensive. It's the one place where investors can still buy growth. Additionally, demand appears to be inelastic, for good reason. Palo Alto, 59 times forward looking earnings is the "cheapest" among the three, and might just be "best in class" However, CrowdStrike at more than 150 times and Zscaler at almost 250 times do seem to be holding their own and even building some upside momentum.

I think I have to consider taking on small longs in all three of these names rather than lumping more capital into a single name. I have been waiting for PANW to come in a little all week. It has not. 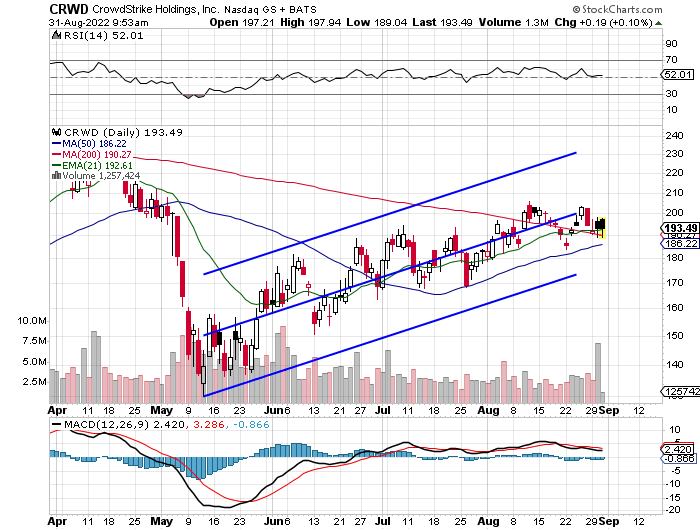 Feels like it's been a while since I had to use a regression model on an uptrend. CRWD fits that bill. Readers will see a neutral looking dally MACD as well as a tepid reading for Relative Strength. However, the 50 day SMA is sneaking up on the 200 day SMA and could trigger a golden cross. If one is interested in initiating this stock, I would probably place my target price at just about $230, which just happens to be the average of the nine analysts mentioned above.

You know... if one did buy 100 shares of CRWD at the last sale, that someone could also sell an October 21st $230 call against the position for about $4. That would be a nice adjustment to the net basis.