Next Thursday, ahead of the opening bell, Target (TGT) , after consecutive embarrassing quarters in terms of corporate execution and inventory management, will release the firm's third quarter financial performance.

For the quarter, Wall Street is looking for GAAP EPS of $2.13 (within a range spanning from $1.90 to $2.40) on revenue of $26.4B (within a range spanning from $25.75B to $26.75B). At consensus, these numbers would amount to earnings "growth" of -29% on revenue growth of 2.7%. Of the 26 sell-side analysts that I can find that cover Target, 24 have reduced their earnings expectation and 16 have reduced their revenue expectation since the quarter started.

Readers may recall that for the second quarter, comp sales grew just 2.6% over the same period the year prior, reflecting brick and mortar sales growth of 1.3% and digital sales growth of 9%. The firm stated at the time, however, that it still expected to post revenue growth in the low to mid-single digit range for the full year and do so at an operating margin rate of about 6% for the back half of the year. We shall find out.

One problem that really stuck out last quarter was not just bloated inventories, but the wrong inventories. We need to see how that issue is resolved. Another serious problem was rising costs. Not much of a surprise there. The statement of operations shows a cost of sales that increased 16.6% to $20.142B (+$2.862B). This, in dollar terms, took operating income of $2.467B the year prior, down to $321M (-87%). Really not much one can say after looking at that.

This is as the firm's net cash position had dropped to $1.151B from $7.368B over the course of that same year. The firm's current ratio had dropped to 0.82 (not really acceptable) from 1.04 (acceptable) over 12 months, while the firm's quick ratio (sans inventories) dropped to an absolutely frightening 0.13 from a still pretty ugly 0.46 a year back.

This morning, two highly rated sell-side analysts opined on TGT, one positively, and the other was more cautious. Five-star rated (by TipRanks) analyst Christopher Horvers of JP Morgan maintained his "overweight" rating on the stock while increasing his target price from $210 to $217. Almost simultaneously, four-star rated (also by TipRanks) analyst Krisztina Katai of Deutsche Bank maintained her "buy" rating on the name, but reduced her target price from $193 to $183. Katai mentioned her expectation that Target might cut fourth quarter guidance.

The firm needs to show that it can meet its stated full year targets and operate at the margin stated. CEO Brian Cornell has been here a while and has always been thought of as an excellent manager. His reputation is really at stake. Not only does he need to hit the above targets, but he has to have demonstrated an ability to control costs, reduce inventory levels effectively, and improve an absolutely awful looking balance sheet. Krisztina Katai's feeling, I think, is something we are all feeling inside. 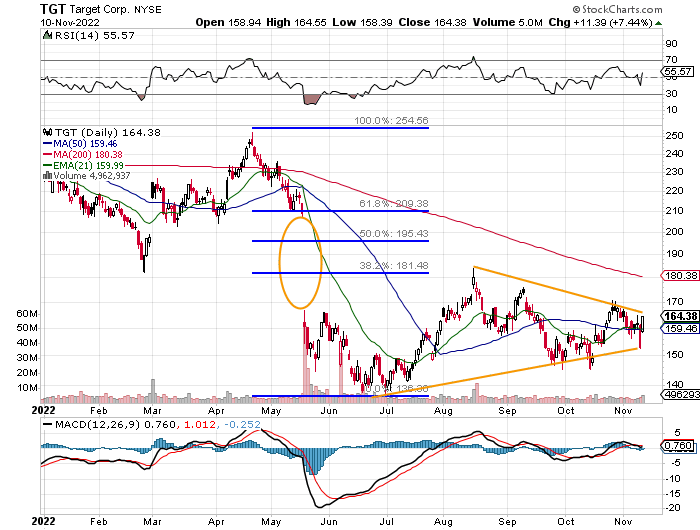 There is a lot going on here. Readers will see that the stock was rejected at a 38.2% Fibonacci retracement level in August of the April through June melt-down. That top only partially filled the gap created in May. The $184 though $209 area remains unfilled. The stock has recently retaken its 21 day EMA and 50 day SMA while experiencing a series of higher lows from July through the present. Conversely, the stock has also experienced a series of lower highs from August on.

This has created a closing pennant or symmetrical triangle. Those often lead to an explosive move of a direction it does not foretell. That times perfectly with next week's earnings. We're not going to learn a lot from either the stock's relative strength nor its daily MACD.

My opinion is that TGT is going to be a safer volatility play, more than a directional play. I would rather do something with strike prices well away from the last sale that is tight even if the premiums might pay considerably more. I personally would rather face naked downside risk than naked upside risk.

Get an email alert each time I write an article for Real Money. Click the "+Follow" next to my byline to this article.
TAGS: Earnings | Economy | Investing | Stocks | Technical Analysis | Trading | Retail