The biggest negative in the market right now is that there is no buying interest. None.

Exactly one week ago the S&P was coming off a two-day 34 point rally and I described breadth as pathetic. And I thought I was being kind by saying that. Then last Wednesday we got oversold and we had a rally, one that couldn't maintain itself throughout the day, but breadth was much better. Friday's decline was all in the index-related names because it is not often you see the S&P down 17 points with net breadth -300 issues while Nasdaq's net breadth is positive by almost that.

Yet despite the more positive breadth in the last two trading days, there remains little or no buying interest.

Oh there are other negatives in the market, such as High Yield and Junk Bonds. Or that the charts look awful and the majority are in downtrends. But to me it's the lack of buying interest that weighs most heavily.

You see, the market is oversold by almost every measure. After the close last Tuesday the Nasdaq Momentum Indicator got oversold and it has gone up in the last two trading days, as it was supposed to. Sure Nasdaq is up 30 points since then, but with buying interest it should be more.

My own Oscillator got oversold on Friday. It is at a higher low vs. late October which shows a lessening of downside momentum. As we enter this coming week the numbers behind this indicator show us to be oversold. For the next four days we will see negative numbers dropped off this 10-day moving average of net breadth. To get more oversold we would have to replace those negative numbers with bigger negative numbers. Sure that's a possibility but not a probability. That's what makes it oversold.

There were fewer stocks making new lows on Friday but it was a half day and a holiday so I won't fuss too much. Rather I will note that the Hi-Lo Indicator is back under 15% and under 15% is a sign of oversold-ness.

Even if we look at the daily net change in the spread between the DJIA's 50- and 200-day moving average lines we see it is now at -40. It doesn't get down here often. It was here in the summer of 2002 (an oversold rally ensued) and it was here in the fall of 2008 (we had oversold rallies then) and in the spring of this year when it got really extreme at -60. Each time we rallied. Not one of those was a major low in the market; they were all within the context of a market in a downtrend. But it doesn't mean we didn't have an oversold rally from these levels.

On the sentiment front, I find it bothersome that for the third time in seven trading days the put/call ratio for ETFs went under 100% but it has forced the 30-day moving average to push down (bullish). The flip side is that the put/call ratio for equities shot up to 85% on Friday (again, it was a half-day holiday so I don't like to fuss too much over Friday's statistics). This has caused the 10-day moving average to shoot up. 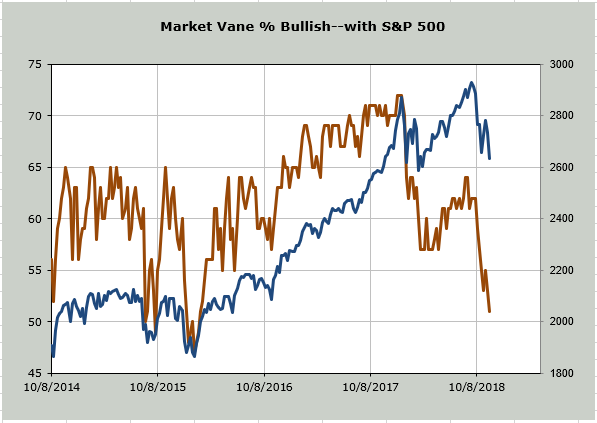 As you can see sentiment is sour and we are oversold. I think that means we should have a rally. But we're going to needs some buying interest to get a good one.