The Cross-Section of Income and Growth

Energy names as a safe haven? Can't be. Even the thought is impossible. First, consider this. Throughout this three month risk-off asset puke fest, WTI Crude has plummeted. Quite painfully. I mean for the commodity, we're talking net losses over that time frame 35%-ish. The energy sector has taken it on the chin as well. Blame the Saudis for over producing. Blame the American shale crowd. Blame the president if you want for releasing from the strategic stockpile, and then the Iran head-fake on sanctions.... but you do know that this president wanted lower oil prices all along, right?

Suddenly, the case seems to be make-able for higher oil prices going forward, maybe into the later half of the year. Data shows OPEC producing less. The Russians seem to get it. Even the Shale crowd seems to be starting to understand supply management. The strengthening dollar seems to perhaps finally be stalling. While there are genuine concerns regarding global economic growth, for now demand appears to be very strong. Oh, and those algorithms and high frequency traders that have created havoc, and disadvantaged investors across financial markets, they're in commodities too, btw.

I dabble in futures markets, heck I'd trade hubcaps if there were a market. That said, I'm primarily thought of as an equities guy. So how about those oil stocks, so deep in the hole? If you follow me, then you know that this is where I have been adding more so than anywhere else over the past couple of weeks. Why?

As markets have been damaged, I have gone to higher cash. I have gone to higher gold. I have hedged just about every tech position that I was willing to leave in place. Why then push into something as unstable as energy? Simple. A lot of folks will push into the REITs and the Utilities for some dividend yield when markets get dangerous. I have some exposure here, but did you know that the Utilities are the only sector projected to show Q4 revenue contraction. Want to hold those names through earnings. Energy stocks, I mean the big names (the smaller names could face debt related issues, stay away) will pay an investor those nice dividends they crave... but not to the exclusion of growth. Am I betting on run away growth? I'm foolish, but not that foolish. I am smart enough to touch a lot of bases. I already told you that I am buttoned up elsewhere. This is my escape hatch, so that I do not miss out completely if things do go right for the economy.

Over one month, or one quarter windows, they all stink, as does WTI Crude. However, over the past five trading days or so, as the underlying commodity has come off of oversold levels... so have the stocks. You likely know already that I stand long Exxon Mobil (XOM) , British Petroleum (BP) , Royal Dutch Shell (RDS.A) for exploration/production, and Schlumberger (SLB) for oil services. Admittedly, I have been long SLB the longest, and that is an under-performing position, but the other three, including dividends are earning their spots on my book. One name that I am not in is Chevron (CVX) , so let's go there.

Chevron, rated by roughly three quarter of covering analysts as a "Buy" or better, with an average price target of $135 by those who changed or reiterated their view over the past three months. Despite a dangerous looking Quick ratio, there is a lot to like. Current Ratios have improved over the past year, and for this kind of company, I would think high inventory levels would certainly be understandable in these times. Cash levels have been on the rise, as have margins. Total debt has been effectively reduced. While I see RDS.A as cheaper, CVX is certainly not expensive. The healthy dividend yield of 4.1% coupled with a $3 billion buyback program are supportive. This is not the wrong play in the space, it's just not my favorite. 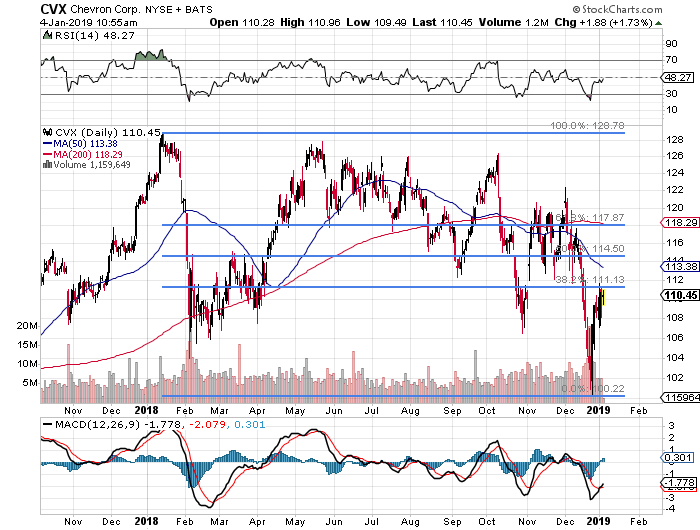 Chevron presents as a difficult name to project, as the volatility is obvious. My thought is that the stock is currently pressed up against Fibonacci resistance at the $111 level.

My thought is to wait until support appears above $111, and the name moves toward challenging the 50 day SMA, currently at $113.38. The investor might make more money if the shares were purchased in the here and now, but the gamble will have a higher probability of success if the investor waits to see what happens at this level.

(BP and Schlumberger are holdings in Jim Cramer's Action Alerts PLUS member club. Want to be alerted before Jim Cramer buys or sells  BP or SLB? Learn more now.)

Get an email alert each time I write an article for Real Money. Click the "+Follow" next to my byline to this article.
TAGS: Economy | Investing | Markets | Stocks | Technical Analysis | Oil Equipment/Services | Middle East | Russia | Stock of the Day