BlackRock , Inc. (BLK) is a global leader in "investment and technology solutions" and they are scheduled to report their latest quarterly earnings figures before the market opens Wednesday. Let's check out the charts and indicators.

In our January 14 review of the charts we wrote that "BLK is pointed lower and the key area to watch is the early October low. If prices hold above the $825 area it will be a good sign. Trade carefully. A close below $825 is likely to precipitate further declines."
In this daily bar chart of BLK, below, we can see that prices stayed weak and broke the October low. Prices have made a significant decline from the November zenith to the early March nadir. A rebound from early March to early April has run out of steam and BLK is back below the declining 50-day moving average line. Trading volume became heavier in January.
The On-Balance-Volume (OBV) line has been weak since November telling us that sellers of BLK have been more aggressive. The Moving Average Convergence Divergence (MACD) oscillator briefly moved above the zero line.

In this weekly Japanese candlestick chart of BLK, below, we can see a shift from up to sideways to down over the past three years. BLK is in a downtrend, trading below the declining 40-week moving average line.
The weekly OBV line shows weakness since August. The MACD oscillator has declined since June and is below the zero line in sell territory.

In this daily Point and Figure chart of BLK, below, we can see a potential downside price target in the $671 area. 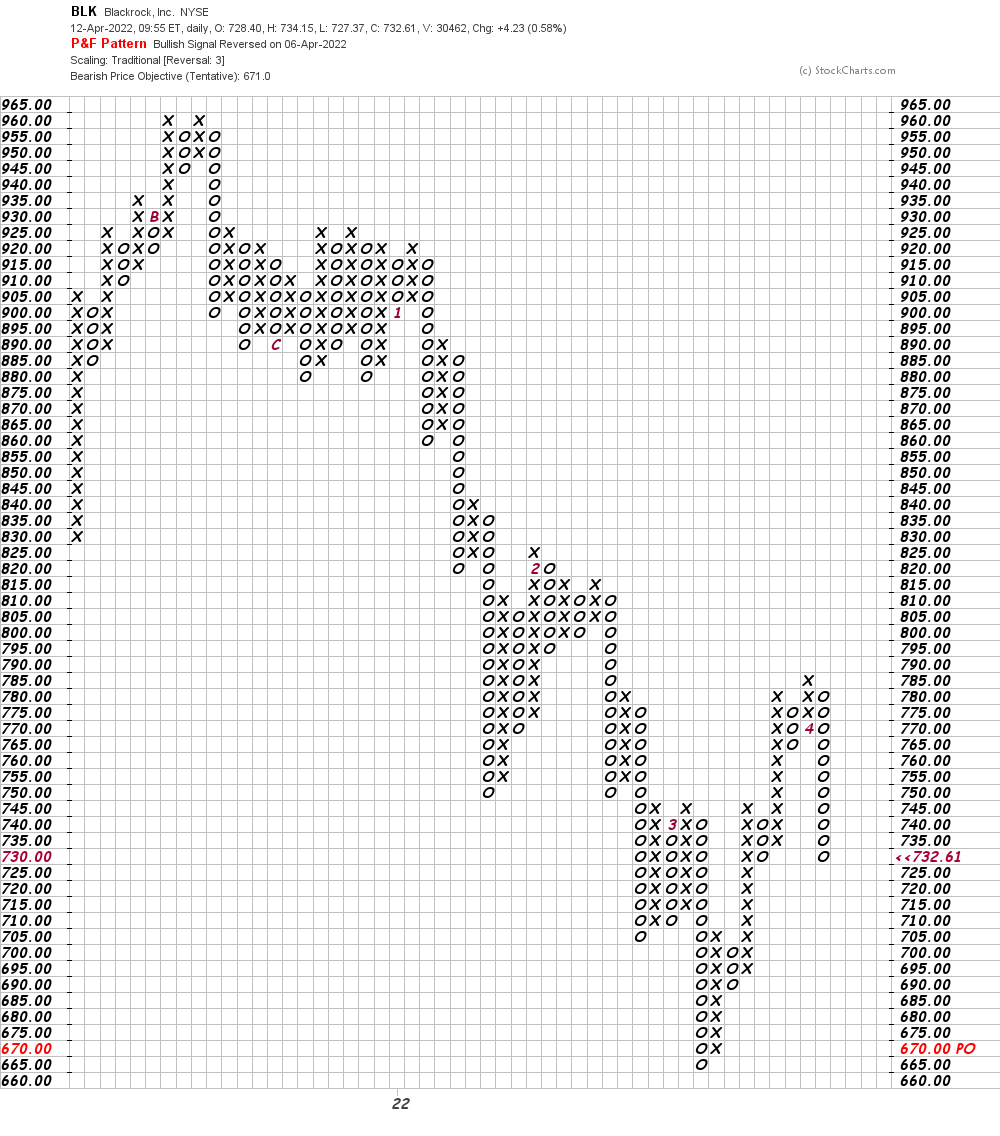 In this first weekly Point and Figure chart of BLK, below, we can see that prices met a downside price target of $796.

In this second weekly Point and Figure chart of BLK, below, we used a five box price reversal filter. Here the downside price target becomes $349.

Bottom line strategy: I hear from my former Baruch students that BlackRock is a great company to work for. I have written here before that I have met two of the eight original partners of the company and have been impressed with them professionally and personally.
But unfortunately the charts and the indicators of BLK are bearish at this point in time. I have no special knowledge of what they might report for earnings but I recommend that traders continue to avoid the long side of BLK. We could see a much better buying opportunity later in the year.
Get an email alert each time I write an article for Real Money. Click the "+Follow" next to my byline to this article.
TAGS: Investing | Stocks | Technical Analysis | Trading | Financial Services | Fintech | Earnings Preview